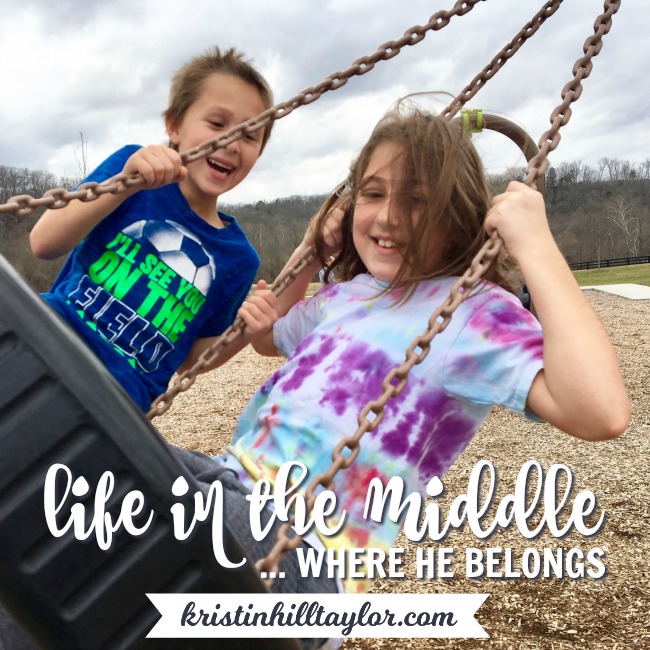 I hadn’t planned on writing today, but when I saw the Five Minute Friday prompt I knew I wanted to write. So here I am, ignoring chores while my baby sleeps, writing. Here’s how Five Minute Friday works: Kate Motaung gives a prompt and a flash mob of writers set their timers for five minutes and just write. This week’s prompt: MIDDLE.

“Why is it 7:02 and nobody is up?” my middle child said as he rushed into our bedroom this morning.

I hadn’t even opened my eyes yet when he said he’d already gotten dressed and packed his lunch.

I immediately started thinking about how to rearrange what my morning was going to look like because the kids were going to miss the bus. Most mornings Greg takes Cate and Ben to the bus stop, which is 12 minutes from our house, so they can get a ride to the private school they attend in a neighboring county.

I figured out how the mac and cheese was going to get assembled and baked for the teacher luncheon, the black bean salsa was going to get mixed for my monthly lunch with fellow adoptive mommas, and how the kids would make it close to on time for school. And then I bolted out of the bed.

Sure enough, Ben was decked out in his uniform khaki pants and navy blue polo shirt. Admittedly, I have no idea what he had in his lunch box other than peaches, but I asked for him to pack Cate’s lunch too. I saw he made her turkey sandwiches on Hawaiian rolls and added an apple and chips to her lunch box.

That middle boy of mine sometimes tests my patience and challenges me to see life differently. But this morning that middle boy stepped up and helped out tremendously. Without him, we would have been more than eight minutes late to school.

Ben is a stereotypical middle child – which was a huge part of why I believed we’d have a third child. He snuggles in between people, likes to be in the middle of whatever is going on, is always on the move, embraces adventure, loves his big sister in ways she doesn’t understand, and adores his baby sister.

This morning my middle child was my alarm and helper.