Search Results for: label/Things I Learned 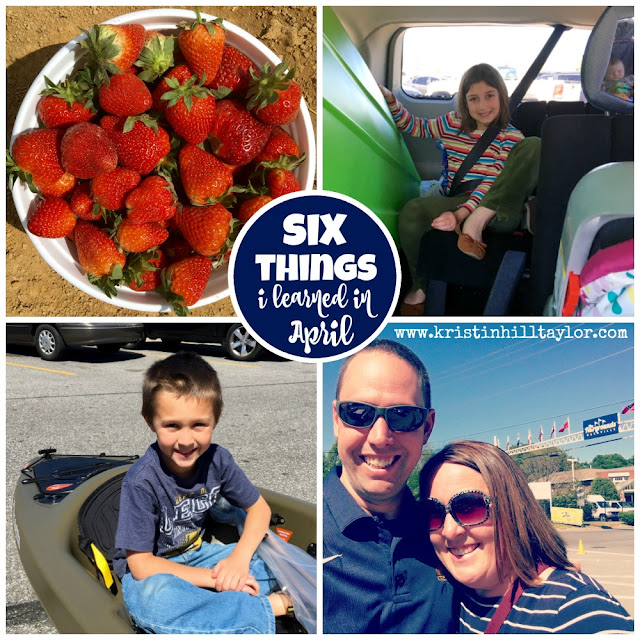 Ah, April, what an adventure you’ve been. You’re the introduction to my favorite month, so I like you. You’ve come and gone so quickly, but we’ve had fun. Before May arrives, let’s remember this month.

(AND if you haven’t signed up for my newsletter, you should do that before May 2, when my next one goes out. There’s a fun, free printable included with a quote I’ve been loving. Really, I welcome new email friends anytime, though! I’ve started updating my ebook and email subscribers will get peeks into that process.)

So, anyway, here are six things I’ve learned in April …

1. The Nashville Flea Market is great. Maybe all flea markets are great, I don’t know. My first flea market experience is in the books. And I hope I get to go back.

(The flea market was only one part of our recent Nashville road trip. We also saw Rend Collective in concert!)

2. Kayaks are good lake entertainment, even if getting them home from Walmart is an adventure.

Let me tell you about that adventure: I’d been thinking kayaks would be a good addition to our lake house. (It’s available for vacation rentals. Did you know that?) And then there they were, on display and on sale at Walmart. So we bought two. And then we realized they wouldn’t both fit in our mini van with two adults, two kids, and a baby … and a stroller, and all the other randomness in my van. So I took on kayak and the girls home, cleaned out the van, and the girls and I went back to Walmart to pick up the husband, son, and second kayak.

Both kayaks now happily reside at Shelter Point Retreat. And my daughter, niece, and nephew were happy to break them in.

3. I can be intrigued enough by a story to keep reading even when I don’t really like the book that much.

“Everything You Ever Wanted” by Jillian Lauren was that for me. It’s an adoption story, and there were parts that were fascinating and interesting. But other parts I ended up skimming. Regardless, it’s brave to tell your story, especially when it has many hard parts, so I’m glad I read it, but I’m not sure I’d recommend it. Does that make sense?

4. A new strawberry patch opened just down the road.

I love picking berries and now it’s even more convenient. If you live in Murray, be sure to check it out the next few weeks while the strawberries are in season. Maybe you’ll have an impromptu adventure like I did.

5. Adventure would be my word for 2016, if I had chosen a word. It’s all around me, as you can tell with my multiple references to it in this post alone!

If I email you about an event or project, send you an invitation for a party, or ask for feedback … and I don’t hear back, then just wait, I will solicit a response in follow up emails, Facebook messages and texts. I’d say I’m sorry, but, really, there’s usually a reason I asked or invited or emailed in the first place, and the reason usually involves a response.

Perhaps you can blame the journalism degree with an organizational communications minor.

So, how was your April? Did you have any adventures? 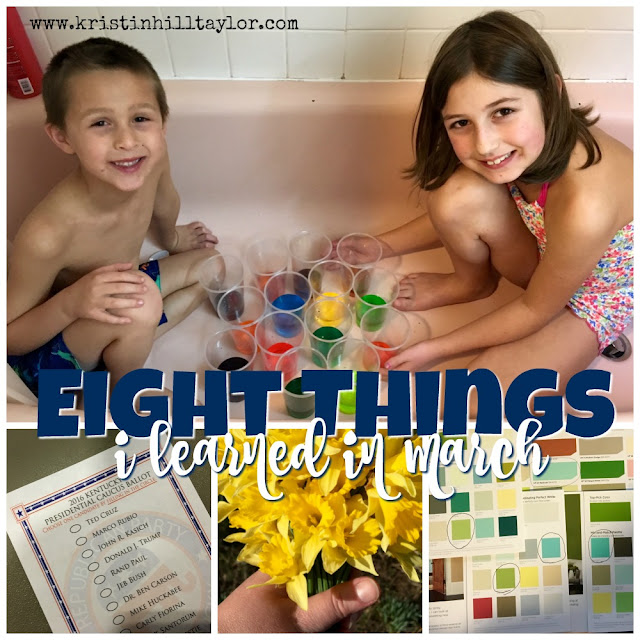 Oh, March, where did you go? You went by so fast. Before you’re completely gone, I do want to document what you taught me.

1. “The West Wing” characters have Twitter accounts. And they’re funny and relevant.

I happened upon President Bartlet’s Twitter account when someone else I follow retweeted one of this tweets about March Madness. When I clicked on it, I discovered Josh Lyman, Sam Seaborn, and Donna Moss. And I’m really glad about that for several reasons – most importantly because I already miss them even though Greg and I just finished binge watching the show earlier this week.

But I managed to pick out colors for the kitchen, living spaces and hallways, and three bedrooms in the house we bought last week. We aren’t moving right away because we are doing some cosmetic improvements and having a fourth bedroom added on.

(Also, could Joanna Gaines please come to Kentucky? Speaking of her, my daughter and I are in love with “Fixer Upper.” Yes, I’m a little late to the bandwagon, I know.)

3. We’re moving to the country. Well, you know, 10 minutes from town, where we live now.

So we bought a new house that sits on 33 acres. Living on some land has been a long-time dream for Greg and I’ve slowly gotten on board. This house and land fit us and we’re excited for our next adventure there.

(Read more about that – and how I learned dreams can change.)

4. When changes are on the horizon, I hesitate and then embrace change in multiple areas of my life at once.

Moving is the change theme right now. In addition to moving our family to a different house, I’m also working with a professional to move my blog to WordPress and redesign my online space too. Plus I got a haircut this month.

5. I can cheer for Austin Peay State University.

The background on this one is we’re hardcore Murray State fans and APSU is our rival. It’s also the school where my sister went on a soccer scholarship and ended up meeting her husband, who played basketball there. We always rooted for them, and it’s easier to do in soccer than basketball. But we still always preferred Murray State to do better.

Well, Murray State had a rough year, at least by its usual standards, and was eliminated earlier than we liked in the conference tournament. Meanwhile, Austin Peay barely made the tournament and then ended up winning four games in four days to earn the automatic bid to the NCAA Tournament.

Yes, we cheered for the Governors. (They ended up losing to overall No. 1 Kansas.)

6. Murray State’s two previous coaches made it to the NCAA Sweet Sixteen – and that’s why I love March Madness.

If you’re a college basketball fan, you probably saw Steve Prohm dance – literally – after his Iowa State team advanced and then heard about Billy Kennedy’s Aggies erase a double-digit lead in less than a minute. With Murray State and Kentucky out, these have been my teams.

These two coaches are perfect examples of why I love sports. They’re the good guys. Kennedy gave the glory to God after Texas A&M stunned Northern Iowa. He’s living with Parkinson’s disease, but believes in building a team and leading men.

(And here’s another article about Coach Billy Kennedy from a local writer.)

And, yes, I wish these two teams were still playing because I feel like I don’t have any rooting interest.

7. Sometimes the kids who have been arguing just need to put on their bathing suits and do a science experiment in the bathtub.

A friend let us borrow “Bathtub Science” and I earned some cool points by letting them put on their bathing suits and make colors with food coloring and water in the bathtub. And all the mamas said, “Whatever works!”

8. I was excited to caucus at the beginning of the month and now get stressed out thinking about the presidential election.

Kentucky Republicans had a caucus (Thanks, Rand Paul!) for the first time ever. I went in with high hopes for Marco Rubio, but that all quickly went down hill. Now I’m keeping up with the presidential primaries from a distance and hoping what seems to be happening isn’t actually happening.

How was your March?

My April newsletter is going out tomorrow! In it will be a fun giveaway opportunity just for subscribers, so subscribe now. Plus I’ll send you a FREE #choosingJOY printable. 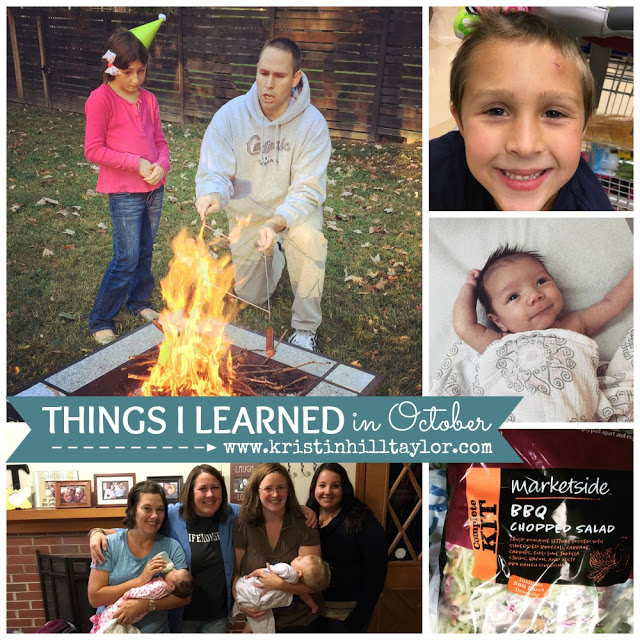 We’re settled in as a family of five and things are are going well. So well, I can’t believe we’re at the end of October. Maybe more people makes time go faster … okay, probably not. Even so, here are tidbits from my month …

Specifically, four 90-minute episodes on Netflix in 2016. Whoo-hoo! You can find all kinds of articles on Google, but here’s the first one I read when the news hit social media.

2. My baby girl is petite but strong.

She’s measuring in the 25th percentile in both height and weight, but she also likes to be on her belly and hold her head up. I can’t believe she’ll be six weeks old tomorrow!

3. A little glue can help a head wound well.

I don’t mean Elmer’s, although the surgical glue seemed about the same! Ben tripped at the playground during Fall Break and landed face-first on the ground … and apparently on a rock that punctured his head. (Yes, this is his second rock-induced injury, if you’re keeping track.)

4. The 62nd of Martin Luther’s 95 Theses is my favorite: “The true treasure of the Church is the Most Holy Gospel of the glory and the grace of God.”

I read through all of the 95 statements, propositions and questions that Luther wrote, thus prompting the Protestant Reformation, because I was organizing an activity for Reformation Day – which happens to be today at my kids’ school.

5. The Marketside BBQ Chopped Salad from Walmart is amazing.

So amazing, I went in Walmart, which I usually avoid, JUST FOR THE SALAD. And AFTER I already grocery shopped across the street at Kroger. I may be obsessed. I just wish I could order the salad online …

6. Thanksgiving is just as good a month early.

We have a tradition celebrating Thanksgiving with three other families. (If you’ve read my ebook, I talk about this tradition and these people in there.) Well, unfortunately, one of those families is moving, so we celebrated early. I’m so glad we did. Sure, Thanksgiving comes officially in November, but giving thanks is good any time of the year. And the turkey, dressing, green beans, jalapeno corn, rolls, cheesecake, and strawberry cake tasted as good as ever.

(And, no, I did not make the turkey this year. Praise God!)

I learned this because I suggested it to Greg earlier this month when we decided to have an impromptu hot dog roast for dinner with friends and didn’t have an wire hangers. It worked well, which I can say confidently based on the tastiness of the end result.

Tell me about your October. How did you spend it? What did you learn?

A new book by a favorite author is always a welcom

We all benefitted from getting outside today. Hone

I'm glad I was able to contribute to "Songs of Hop