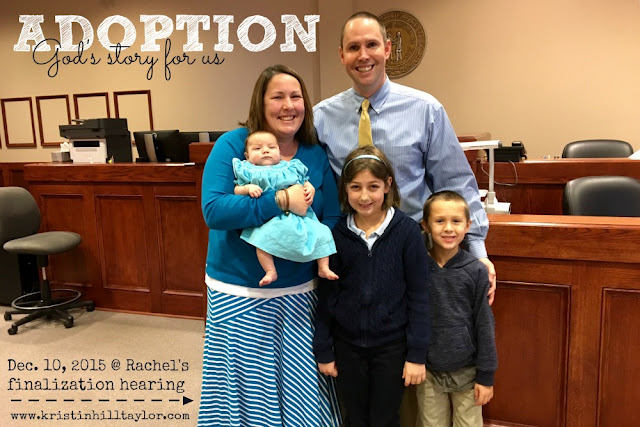 I lost count of how many times I was told my daughter looks like me. She acts like me too. Turns out, people have said the same about my son. And, really, I see resemblances between Cate and Ben, who are 30 1/2 months apart. The best part: They’re both adopted. And I absolutely love their stories, which really is our story. I love how God put our family together and showed us he was there throughout with details along the way.

The short version of bringing Cate into our family goes like this: We decided to adopt in October 2006, having absolutely no idea what the process would entail but ready to see what God would do. At Christmas 2006, my sister told us she knew a girl who wanted to talk to us about adopting the baby girl she was carrying. We ended up meeting this girl on Jan. 18, 2007, when she was 25 weeks pregnant with the baby who would be our daughter. Cate was born a few days shy of 15 weeks later.

The story continues with Ben: We decided our second adoption story would probably involve an agency, even though we loved everything about our first independent, private adoption. We put it our desire to adopt again out there in October 2008, updated our home study in the spring of 2009 and chose an agency that we visited in July 2009. But that’s not all that happened in July 2009: We ended up meeting our second birthmom. We first saw our son via ultrasound when the birthmom was 25 weeks into her pregnancy. And Ben was born 14 weeks later.

And then God surprised us with a third adoption process after we weren’t sure it was going to happen. We’d been hoping to adopt a third time since January 2012, but then stopped pursing anything two years later. We met the birth mom in May 2015 and welcomed Rachel Elizabeth into our family on Sept. 19, 2015. This may have been our third independent, open adoption, but God still opened my eyes to so many aspects, including a new perspective on the generosity that exists among all the emotions of adoption.

And now we are five, officially.

“Peace in the Process: How Adoption Built My Faith & My Family” – This is my family’s testimony bound up in a book that’s available on Amazon.

Adoption Resources for Kentucky Families – I put together this PDF for Kentucky families who want to get an adoption process started.

Books (for adults and kids) and websites – This list was compiled with a little help from my friends. (Several of these are linked directly on Amazon too.)

Why Adoption Awareness Matters to Everyone – A blog post that offers ideas of how to incorporate adoption & orphan care awareness into your life, even if you aren’t supposed to actually adopt.

Prepare & Wait – I answered the “now what?” question for people who decide they want to pursue adoption.

Adoption Together – I host a private Facebook group, where adoptive and foster moms share prayer requests, resources, and family testimonies. If you’d like to be added, reach out to me directly and I’ll be happy to add you.