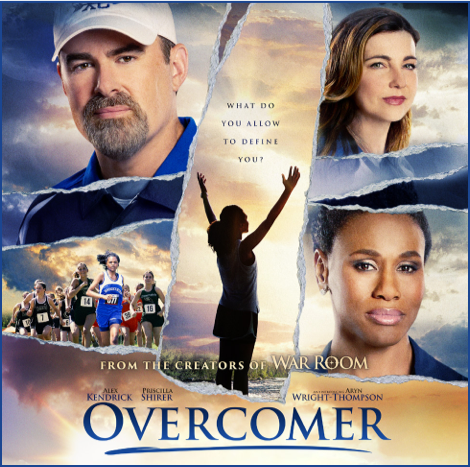 Race finish lines make me teary – and I’m not usually the one running. I’ve run a few 5K races, and I only liked them because there’s victory in crossing the finish line. More often these days, I stand near the finish line with my fourth-grade son finishes his mile races as part of his school’s running club. And I get teary every time, even watching kids I don’t know finish.

Of course, I got teary when I watched “Overcomer” too.

My family of five watched “Overcomer” in September in our local movie theater and all enjoyed it. My 12-year-old Cate was inspired enough from the movie to join the running club at school. And my youngest, Rachel, who wasn’t quite four at the time, even liked it and later referred to it as “the Hannah movie,” referencing the young runner at the center of the story. My husband and I loved being able to take our kids to a movie that everyone could enjoy and also offered meaningful faith lessons.

“Overcomer” is an inspiration, family-friendly sports drama created by Alex Kendrick, the actor/writer/director also behind “War Room” and “Courageous.” The digital version was released Nov. 26 and the Blu-ray and DVD comes out Dec. 17 from Sony Pictures Home Entertainment, AFFIRM Films and Provident Films. The movie stars Priscilla Shirer (“War Room” and “I Can Only Imagine”), Shari Rigby (“October Baby” and Wildflower”), Cameron Arnett (“Meet the Browns” and “Stand Your Ground”) and newcomer Aryn Wright-Thompson.

This movie received a 98% audience score on Rotten Tomatoes and now is available in time for holiday gifting.

In “Overcomer,” life changes overnight for coach John Harrison (Kendrick) after he loses his basketball team and is challenged by the school’s principal (Shirer) to coach a new sport he doesn’t know or like. As John questions his own worth, he dares to help the least likely runner take on the biggest race of the year. Filled with a powerful mix of faith, humor, and heart, this inspirational story will have you on the edge of your seat.

The Blu-ray, DVD, and digital release come with an extensive array of bonus material, including 10 minutes of extended and deleted scenes, fun bloopers, exclusive commentary by Director Alex Kendrick and Producer Stephen Kendrick, and in-depth looks at the power of forgiveness and identity. During these features, viewers can learn about how the crew worked together with faith and prayer to create this incredible film, hear the cast and crew discuss what the theme of identity means to them, and enjoy the lip-sync music video for Mandisa’s popular song “Overcomer.” The Blu-ray and digital versions have additional exclusive content, including segments about how the stunning opening drone shot of the film was realized with a lot of ingenuity and a well-organized crew and how Alex, Stephen, and Shannon Kendrick found their path to filmmaking through authenticity and faith; behind-the-scene looks at editing, composing, coloring, and sound design; and a lyric video for “Enough” featuring Koryn Hawthorne.

I received a copy of “Overcomer” on Blu-ray and a signed promotional poster in exchange for a review, but my family of five paid to see the movie in the theaters in September. Thanks to Fly By Promotions for this opportunity.

I’ve got Unpopular Opinions. What are yours? #un

We don’t have many routines during this #sociald

We learned a new card game this weekend, thanks to

Taking pictures at the creek may be my new favorit

This is our third Saturday in a row at home. It’

I finished reading “The Odds of Loving Grover Cl

Hello, Friday! We’ve got some school to do today

This came at a good time! Thank you, @misfitsmarke

Here we are on Day 12 of #socialdistancing and we