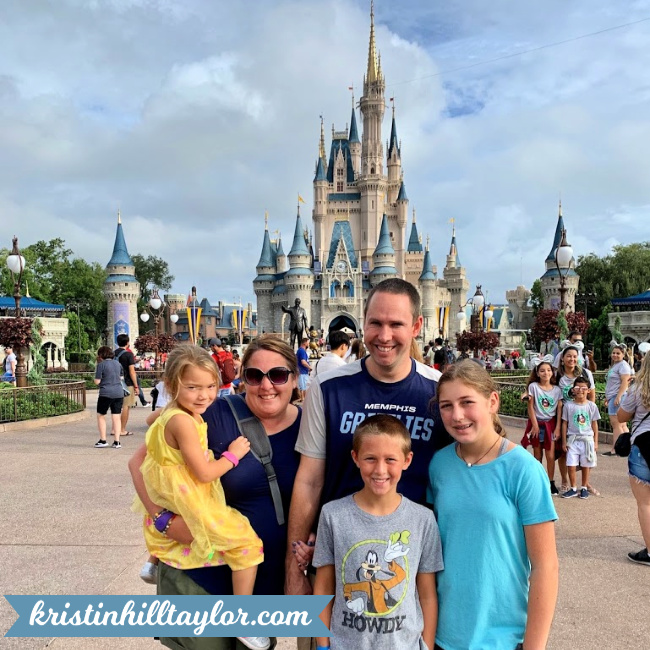 If you follow me anywhere online, you probably already know we went to Disney World and Universal last week. I have hundreds of pictures and as many sweet memories. Of course, there was some stress (hello, independent 4-year-old child, massive crowds, and THREE days that required ponchos), but the good greatly outweighed the bad.

I want to recap our trip with some popular questions we’ve gotten from friends both in our everyday life and online as I shared photo recaps each night of our trip. This was our second Disney trip as a family. So here it goes, and, of course, if you have other questions, y’all know I’m happy to share so ask away.

Yes, and I would every time I go to Disney. The hospitality began when we checked our bags in Nashville and didn’t see or handle them again until they were in our resort rooms. Plus the Magical Express from the Orlando airport to the resort was fabulous and convenient. When returning home, we checked our bags with the airline representative at the resort and didn’t have to haul them around. We just picked them up at the baggage claim in Nashville. 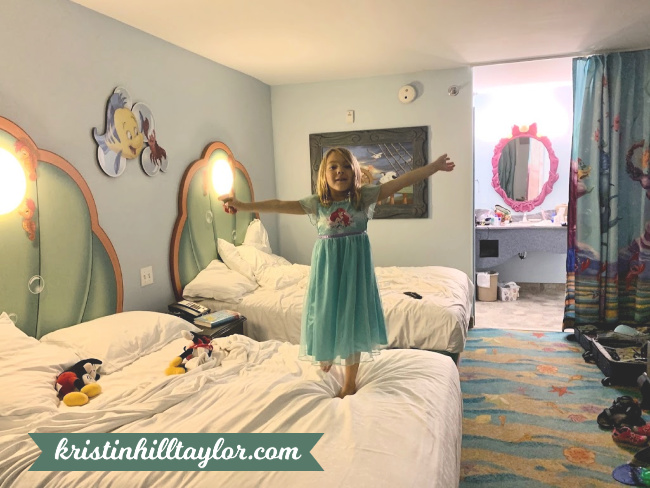 Where did you stay?

We stayed in the Little Mermaid section of Art of Animation. I should probably tell you “we” is my family of five (kids are 12, almost 10, and newly 4), Greg’s mom, and my mom. I chose this resort because we thought we were going to have adjoining rooms. We didn’t, but Disney has top-notch customer service and made it up to us. They were going to move us to be in adjoining rooms, but I missed that message so we ended up with two extra fast passes at Magic Kingdom and an extra sit-down meal. Our rooms were just down the hall from each other and that worked out fine.

The resort was fine. The rooms were regular hotel rooms but decorated with Little Mermaid stuff (pictures on the wall, under-the-sea tile in the shower and curtains on the window). We were one of the farthest buildings from the main building with the restaurant, drink machine to refill our cups, arcade, gift shop, and front desk. Some nights the in-room internet worked well enough for Greg and I to stream a show on our Kindle and some nights I couldn’t post on Instagram.

We stayed there from Saturday to Saturday and all slept soundly each night. 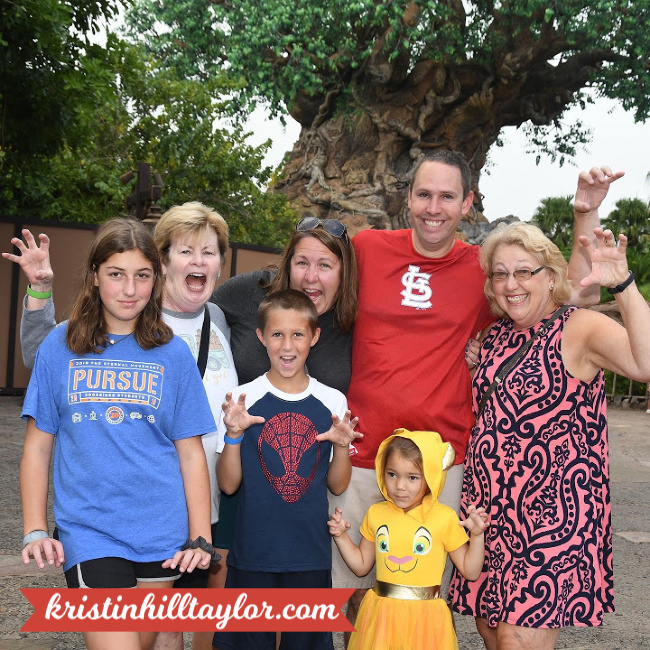 What parks did you go to?

Here’s how our itinerary broke down after we arrived on Saturday.

No, Universal isn’t part of Walt Disney World. But it’s also in Orlando and home to the Wizarding World of Harry Potter. As many of you know, my oldest is obsessed with Harry Potter and his wizard friends, so we wanted to incorporate this. Greg is also a Harry Potter fan and Ben is beginning to be. Going in, I was a little worried it was too much. But it all ended up being just right for us. (I’m going to do another post on Harry Potter and Universal, so stay tuned!)

My Disney planner helped coordinate transportation from our Disney resort to Universal and that worked out well. We just had to set up pick-up and drop-off times a day before and we were all set. The cost was less than we would have paid for the two Ubers we likely would have needed two days in a row to get there and back.

Truthfully, we rode way more rides at Universal, thanks to smaller crowds and the fabulous child swap system there. 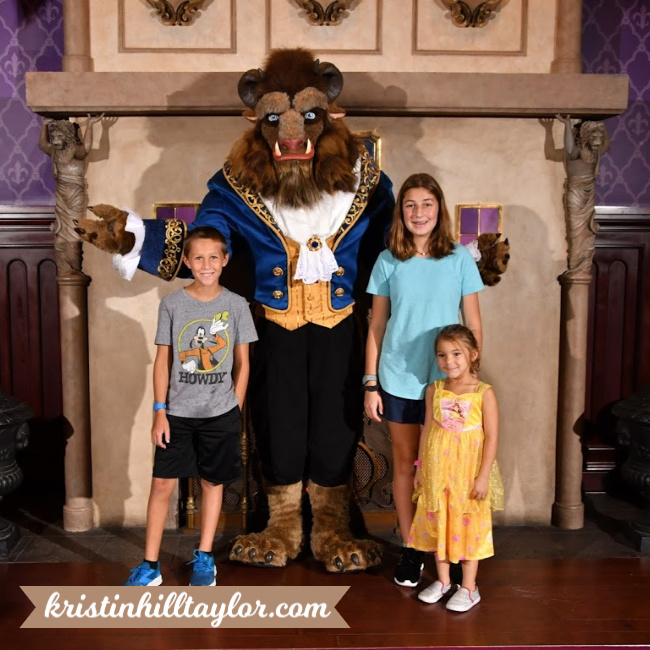 Did you get the dining plan and where did you eat?

Yes, the dining plan is a huge part of why I go to Disney. I love the character meals and the fine dining opportunities.

Of course, we ate multiple meals at the quick-service dining room at Art of Animation too. 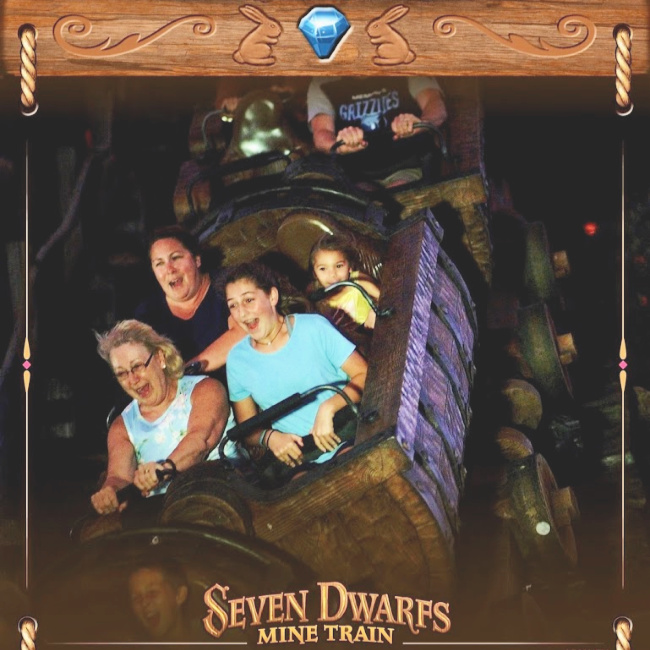 Should I get the Memory Maker?

Yes! I take pictures with my own camera, but I really love the ride photos, group photos in front of park landmarks, and the candid and posed photos with characters. The photos are incorporated into the app and it’s super easy to download and share them. It’s even a little cheaper if you purchase it before you go. (Learn more about the Memory Maker.)

How can you save money and still have a great vacation?

Disney prices reservations based on its crowd calendar in an attempt to control the crowds. So it’s cheaper if you go when it’s not as popular, which will be better for you in lots of other ways too. My biggest tip here though would be to work with a Disney planner, whose services are FREE to you, because a planner will know how to best take advantage of available deals. Even if you want to plan some of your vacation, a planner is a great support throughout the process. I’ve used Jennifer Hart with Wish Upon a Star for four vacations now, and I’d use her again. She books Disney trips and cruises, but she also books for lots of other destinations and companies. (Read more about why to use a Disney planner.)

Are you ready to go back?

No. I know, probably not what you were expecting me to say. I am ready to go on another Disney cruise, though. The shows, characters, and meals are my favorite parts of Disney’s incredible hospitality and I can get all of that plus excursions to fun places on a cruise with fewer crowds. Of course, we like rides, but that’s certainly just part of the experience. (Read more about previous trips, including cruises.)

What else do you want to know?