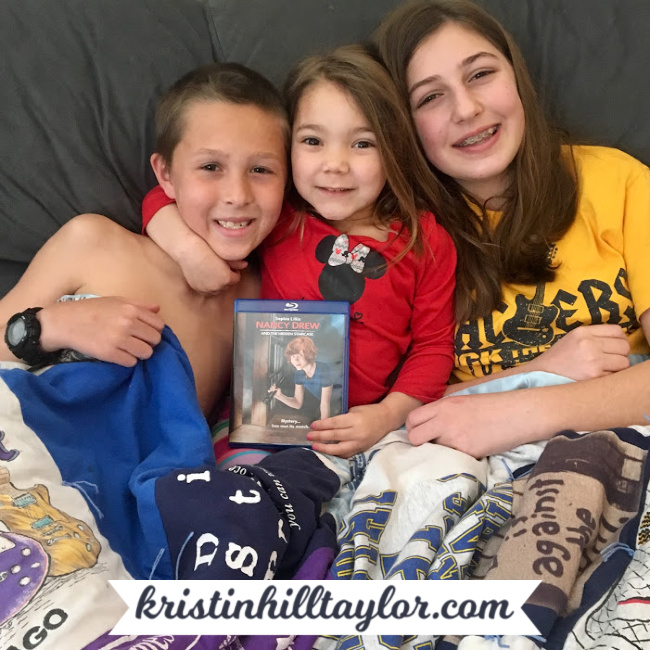 Warner Bros. Home Entertainment provided me with a free copy of the DVD/Blu-ray I reviewed in this blog post, but the opinions I share belong to my kids and me.

We started off Spring Break with a movie that seemed well suited for both my sixth-grade girl and third-grade boy. I was right – they both enjoyed “Nancy Drew and The Hidden Staircase.”

After the death of his wife, Carson Drew decides to leave Chicago behind and make a fresh start with his daughter in River Heights. But for 16-year-old Nancy Drew, life in a small town is mighty dull. She longs for excitement, adventure, and the chance to make a difference. Nancy gets that opportunity when she is asked to help solve the ghostly activity at the Twin Elms mansion.

Can she help explain the creaking footsteps, exploding lightbulbs, and the ominous creature? Is it the handiwork of high-school bully Derek Barnes? Or is it possible that the ghost of original owner Malcolm Colfax is back for revenge? Recruiting her best friends George and Bess, along with local “mean girl” Helen, Nancy Drew is on the case!

Ben said it reminded him of the Hardy Boys books. Cate, who has read several Nancy Drew books, said Nancy didn’t look like she expected her to but she did play the part well. Cate also considered the books more serious than the movie. Ben agreed the movie was funny: “If I were going to watch that again, I’d go right to the end because it was the funniest part!”

Both my kids thought they had solved the mystery before the end of the movie, but they were wrong! They recommend this movie to anyone who likes mysteries. They didn’t think it was scary, but it was creepy enough that my 3-year-old girl left the room for other entertainment.

The iconic mystery-solving teenager from the classic Nancy Drew books is back with an all-new feature-length film that will keep you guessing until the very end! “Nancy Drew and The Hidden Staircase” stars Sophia Lillis (“It” and “Sharp Objects”), Sam Trammell (“True Blood” and “This is Us”), and Linda Lavin (“The Good Wife” and “Alice”) and follows Nancy Drew in her new town, making new friends and on a mission to solve the case! Ellen DeGeneres is the executive producer.

And there’s a copy of this movie for one of you, thanks to Warner Bros. Home Entertainment! Just use the Rafflecopter widget below to enter this giveaway between now and Tuesday, April 9. Open to U.S. residents only.