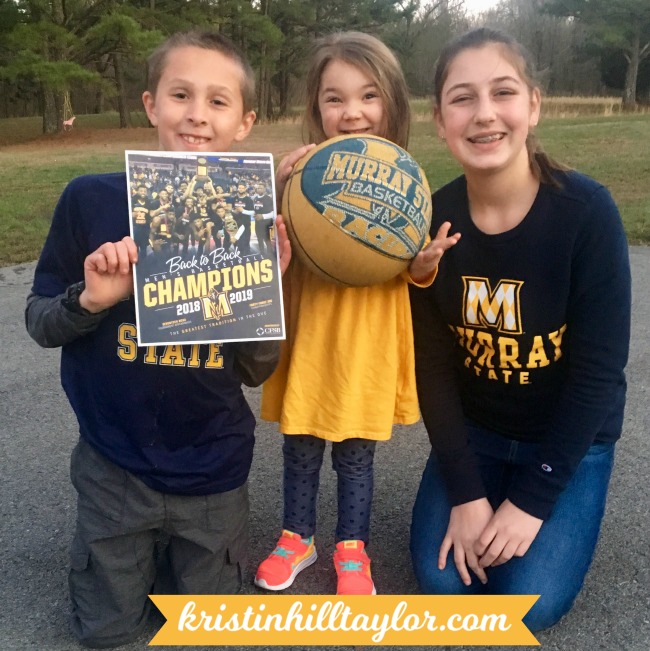 In the winter, we plan our social life around the Murray State basketball schedule. We meet friends for dinner before the games. We have friends who travel with us to a few away games – sometimes in a 14-passenger van we borrow and now my eight-seater Pacifica is an option with another family that most often joins us.

I have pictures of Cate and Ben sleeping at MSU basketball games. Rachel doesn’t fall asleep like they did because she doesn’t want to miss anything, but like her siblings, she is learning to spell R-A-C-E-R-S! She recognizes both the mascot and the logo around town. Cate is old enough to have memories of players she’s loved watching and each season becomes more invested and interested. Ben asks more questions about the rules and strategies and loves playing sports. He filled out his first March Madness bracket this week.

It’s been an exciting season for Racer fans.

Murray State only lost four games in the regular season – two by very few points to Alabama and Auburn, both bigger programs in the Southeastern Conference, and then two to conference foes when our best player was nursing an ankle injury.

Speaking of the best player, point guard Ja Morant has gotten much national attention this year. He’s dunked over people and landed himself and the rest of the Racers on SportsCenter more than once. He’s expected to be among the first few picks in the NBA Draft. He’s been a joy to watch because he truly looks like he’s having the most fun. He celebrates his teammates and this town.

The Racers shared the regular-season championship with Belmont and then went on to beat the Bruins in the conference tournament. With the tournament trophy in hand, the Racers also clinched an automatic bid to the NCAA Tournament. They play Marquette today, and we’re hoping this isn’t the last game for this team that’s been so fun to watch. We wish we were in Hartford, Connecticut to watch, but we’ll be watching from our living room with friends.

Basketball games give me a chance to say yes, introduce my kids to other towns, and let go of our bedtime routine. Naturally, I’m a rule follower who wants everyone to follow my rules, but I’ve had opportunities to give the kids treats and grace. Those things don’t come naturally to me, so being a sports fan has helped me keep perspective on life.

Being a sports fan has helped me be a yes mom
and provided a backdrop for making memories.

March Madness is the best in our sports-loving world. And now we get to root for our favorite team to be the Cinderella of The Big Dance. Pass the popcorn.