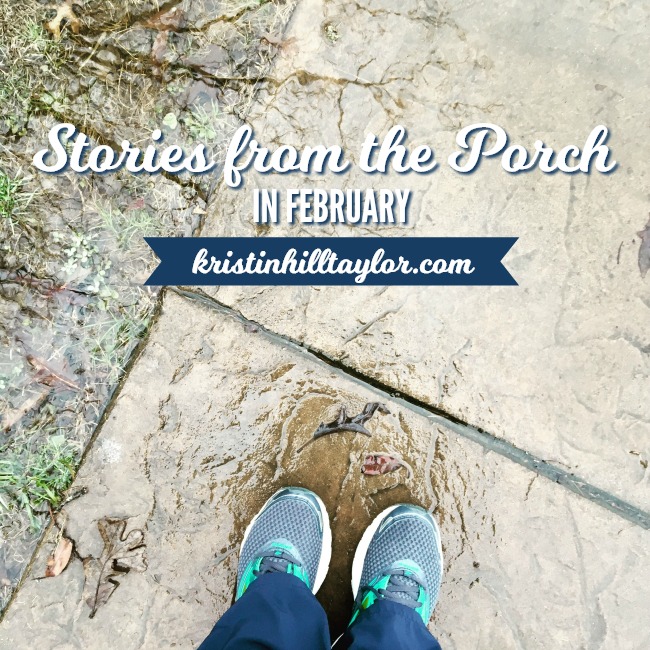 Well, February, I know you have fewer days than the other months, but, even so, you were so full. And wet. Oh the rain. My friends who live farther north have had snow while we’ve had many, many inches of rain that have come with flood warnings. Meanwhile, time continues to fly around here, even though I keep trying to slow it down!

It’s the month of love – both for Hallmark and here for Team Taylor! Greg and I met 21 years ago on Feb. 7, 1998, and then went on our first date a week later. Yep, that would have made it Valentine’s Day. Before kids we called it First-Date Day, now it’s still that plus some more traditional Valentine’s Day sprinkled in because kids certainly make it more fun. {Read more of our story here.}

One of my favorite Valentine’s Day traditions with the kids is to hang up hearts on their bedroom doors that list things I love about them. I even do it on Rachel’s door because one day she’ll be able to read and until then she’s got people who love to read to her.

This month the love continued when we took a few road trips:

I gave the big kids tickets to see TobyMac (along with opening acts Aaron Cole, We Are Messengers, Ryan Stevenson, Jordan Feliz, and Jeremy Camp) as their Christmas present. We finally cashed in that delayed gift with the concert earlier this month. Initially, I was in it for the kids – and the delicious steak dinner we had beforehand. But the concert was so good!

On actual Valentine’s Day, we met some friends for dinner at one of my very favorite restaurants and then watched our beloved Murray State Racers win a close game at Austin Peay in Clarksville, Tennessee.

The after school the next day, we went to Louisville to hang out with my mom, some new friends, friends who used to babysit our kids, and my brother and his family. On that Saturday night, Greg and I detoured for a date with my oldest best friend and her husband before our own date to see Kentucky beat then-No. 1 Tennessee, which drew the third largest crowd ever at Rupp Arena. It was a weekend that filled my soul.

Chrysler Pacifica – After our fun couple weeks of travel to the concert, basketball games, and Louisville, our 2011 Dodge Caravan started making noises. A trip to the dealership service department revealed a transmission issue we weren’t sure we wanted to pay to fix. That decision was confirmed by a mechanic specializing in transmission issues. So we traded that van in toward an upgraded (majorly!) to a 2018 Chrysler Pacifica. Obviously, that’s a big purchase, so we’ll have to factor that into the monthly budget template we’re using. The Pacifica is great and I’m super thankful for the protection and provision God has shown to us during this unexpected situation.

The Couch with Mary Carver – I’ve actually shared about this here before, but I got to be a guest on her podcast, which was so fun! Mary and I talked about our favorite TV marriages, so I’d love to hear about who you would add to our list. {More on the episode here!}

Refined series at Lyli Dunbar’s blog – I got to share a piece of our story about Ben being burned and how community helped us heal as part of Lyli’s blog series. She has an encouraging space on this big ‘ole internet and I was happy to be there.

Crock Pot – I told Greg and I needed a new Crock Pot, so he bought me one for Christmas … and it’s the best! The six-quart appliance has brown/saute, slow cook, bake, and keep warm functions. That means when I made taco soup recently, I could brown the beef and onion first, add the other ingredients, and switch to the slow cook function. One pot. Yes, please. Plus the one pot is stainless steel and way easier to handle and clean than the ceramic pots I’ve always had before.

“Since You’ve Been Gone” by Christa Allen – I borrowed this one for free from Amazon on my Kindle and really enjoyed it. It was a quick fiction read about a woman who was uncovering some truths while navigating grief. The characters were relatable and the plot line had enough mystery to keep me intrigued. This author has several other books I added to my list.

“The Secret Orphan” by Glynis Peters – This story is set while World War 2 is raging. I really liked the main character and her story. It was different than other books set in this time period that I’ve read because it focused more on a commoner and how the war infiltrated her life.

“Good As Gone” by Amy Gentry – I read this book in three sittings, but I’m not sure what I thought about it. The story was intriguing, but it also seemed far-fetched. That said, I was surprised more than once and was eager to finish it.

We’re glad “Survivor” is back on! I’m a longtime fan of this show, but I’m even more of a fan of watching it with my oldest girl. Meanwhile, I’m sad “Manifest” is over for the season. What cliffhangers!

What are you loving, reading, and watching?