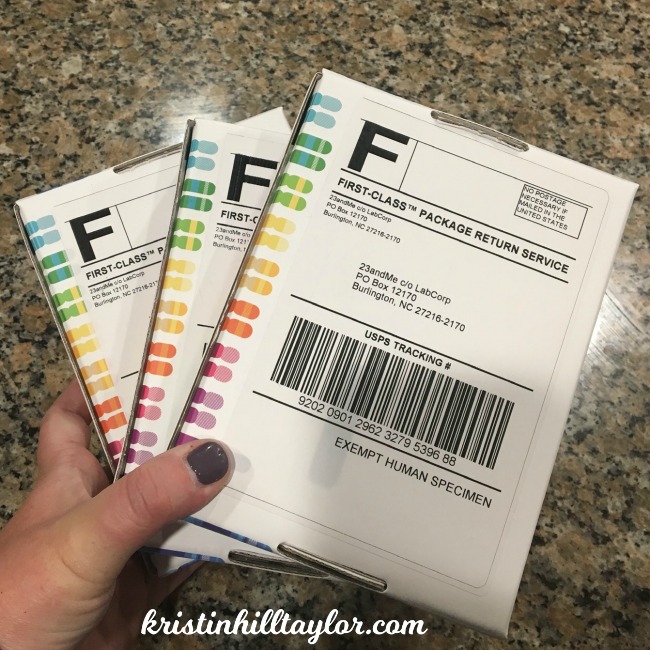 Even with adoption, I know many details of my kids’ stories, but I still wanted to learn more about their ancestry – and so did they! I’ve been watching DNA tests, waiting for the prices to come down. They have, especially coupled with holiday specials, so I recently ordered all three kids the ancestry test kits from 23andMe.

The kids come with specific instructions and are simple to complete. Cate (11) and Ben (9) had no trouble filling the tube with spit, but Rachel (3) took forever and we apparently didn’t even get enough in (even though there’s a marked line) because hers wasn’t able to be tested. But 23andMe sent me a replacement kit that’s good for about a year for free. I didn’t even ask. That was just their emailed response. That’s good customer service!

The big kids loved getting their ancestry results back. I mailed them just after Thanksgiving, received an email when they were received, and then got emails less than two weeks later that the reports were ready. The reports included showed percentages of ancestry composition and a timeline of how many generations ago was the most recent ancestor from the given populations.

I ordered two more kits for Greg and myself. I’m totally intrigued by the ancestry information and look forward to learning more about mine. Greg is just being a good sport because I want to see his ancestry too!

Because all three of the kids were adopted at birth, I wanted some privacy so long-lost biological relatives couldn’t connect with us. I used their initials when I registered their kits and didn’t connect with other 23andMe users.

The ancestry DNA kits are typically $99, but they do go on sale. I paid $49 each for the kids during a Thanksgiving promotion and $69 for mine and Greg’s during another holiday promotion. The kits that test both DNA and medical are regularly $199. (You can save 10% with this link!)

I paid for these kits with my own money during 23andMe’s Thanksgiving promotion and wanted to share my thoughts on the DNA testing process because several people have asked about my experience.