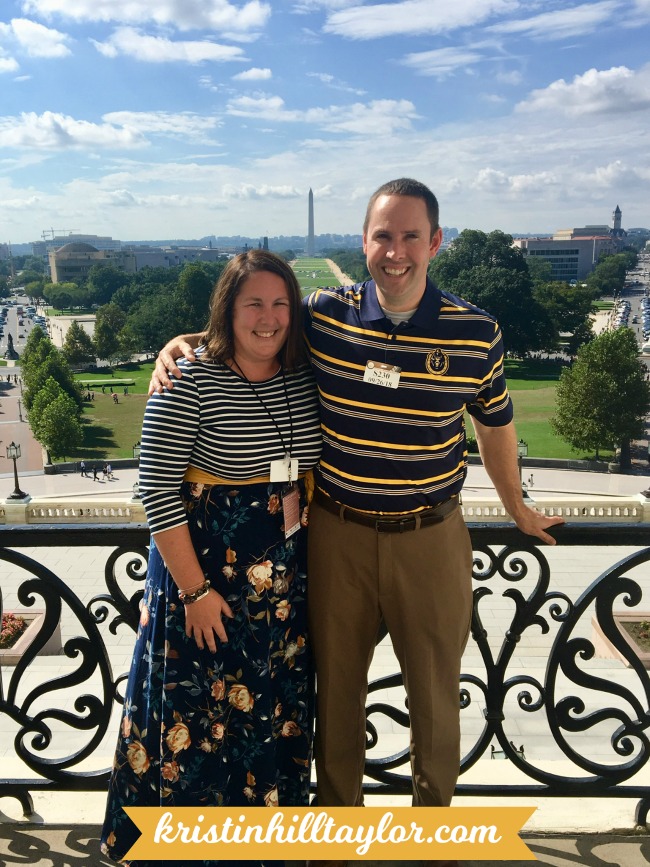 I would have so many stories to tell you if you were on my real-life porch and said, “Hey, Kristin! How was your trip to D.C.?”

Short answer: The trip was wonderful. We saw a lot!

Longer answer: Really, this trip to our nation’s capital was a sweet spot for me for many reasons, so let’s go that route recapping my trip. (Although my mom wanted a day-by-day recap, so that’s an option too!)

So, the sweet spots: I’m a former newspaper reporter who still loves news and government, so I loved the atmosphere. Greg and I hadn’t been away by ourselves for more than a night in five years. I got to share pieces of my family’s adoption story — which certainly includes a larger community — with my representative, one of my senators who is also the majority leader, their congressional staffs, my governor and his wife, and a former foster child who is now a lobbyist. Plus I got to hang out with a friend from Oklahoma and we made new friends from our own home state. We connected with a family from South Dakota that I hope to get to know more.

We saw monuments, rode on a short train in an underground tunnel that connects an office building to the Capitol, toured the White House, participated in the FBI Experience at the Hoover Building, and saw Vice President Mike Pence and Dr. Christine Blasey Ford exiting the Capitol at separate times with their entourages. We walked in the rain and used Uber like it was our best friend.

Officially, I was in Washington, D.C. as one of the 2018 Angels in Adoption recognized by the Congressional Coalition on Adoption Institute. U.S. Rep. James Comer nominated me. He presented with an award at a luncheon one day and recognized me with a speech on the House floor the next day. With our new friends from Louisville, we got to meet with Comer as well U.S. Senate Majority Leader Mitch McConnell, who is one of our state’s senators, and their staffs.

On the last night, we celebrated this program and the families who participated with the annual Angels in Adoption Gala. We got all dressed up and Kentucky’s Gov. Matt Bevin, who has nine children, four of whom are adopted, joined us. Bevin, a Republican, and Louisiana Gov. John Bel Edwards, a Democrat, announced their partnership to improve foster care systems in their states and across the nation so forever homes are realities.

Adoption and foster care are not partisan issues, and I’m thankful we’ve gotten to be a small part of the work — both at home and here in Washington, D.C.

I took lots of pictures and elaborated on some of these aspects of the trip in Facebook posts, so you’re welcome to check out those for more details. {Personal Photo Album // Adoption advocate press release} Meanwhile, I got the new CSB (in)courage Devotional Bible in the mail last week and I’m excited to share with y’all I have two devotions included in this beautiful project.