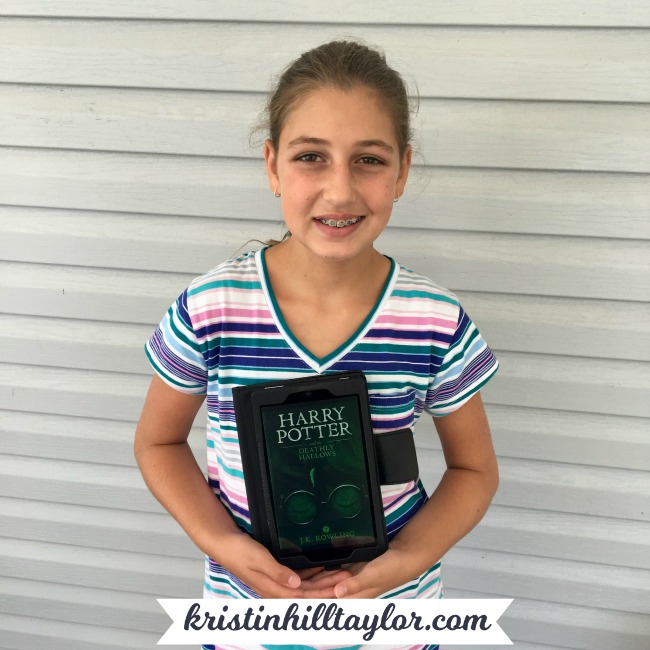 Well, hello, school. This morning I’ve got a sixth-grader, third-grader, and toddler who is super excited and has no idea what to expect from Mothers’ Day Out that begins tomorrow. She missed the preschool age cut off by about six weeks, but I know she’s ready for some kind of school setting. Meanwhile, the big kids probably could have kept living their best summer lives but surely will be glad to see their friends and settle well back into the school routine.

In honor of this first day back at school, my sixth-grade Cate is here sharing a review of the Harry Potter series. We bought two of the books at a used book sale on Fourth of July. She started a few days later and finished the whole seven-book series in about a month. Y’all, that’s a lot of reading in a month!

The whole series is available on Kindle Unlimited, so that’s how she read the five books we don’t yet own. (Get the whole series in paperback or the Kindle versions here!) But my aunt is graciously mailing her the books she doesn’t have because, yes, she’s already started re-reading it!

To me, the Harry Potter series is exciting and suspenseful. The details create great images but also leave enough to your imagination. Author J.K. Rowling was very creative when making this series.

My favorite is the fourth one, “Harry Potter and the Goblet of Fire.” I like this one especially because of the Triwizard Tournament. I won’t spoil it in case you decide to read it, but it’s full of danger and adventure. It is also very mysterious, for several different reasons. I don’t really like danger and mystery separate, but together they’re awesome!

After #4, the seventh book is probably my favorite. “Harry Potter and the Deathly Hallows” is definitely the most dangerous and adventurous. It’s very constant danger/adventure so, I stayed up late not wanting to put it down! I really love how J.K. Rowling ended it. If you want me to explain a little about the Deathly Hallows, then I’ll say a little: Harry needed a certain cloak, wand, and stone, and his enemy did not need to get his hands on them!

My least favorite is the fifth one, “Harry Potter and the Order of the Phoenix.” It is the slowest story and I didn’t like the ministry, a professor, and the story. The book is very sad.

Overall, I enjoyed this series – so much so I already started rereading the books! If you read them, I hope that you enjoy them, too!

Cate, 11, will re-read books more than anyone I know, comprehends and remembers more details than I knew was possible, and loves horses. She’s excited to have a locker this year at school although she will miss sleeping in most mornings. Her momma is going to miss her help and conversation during school hours.