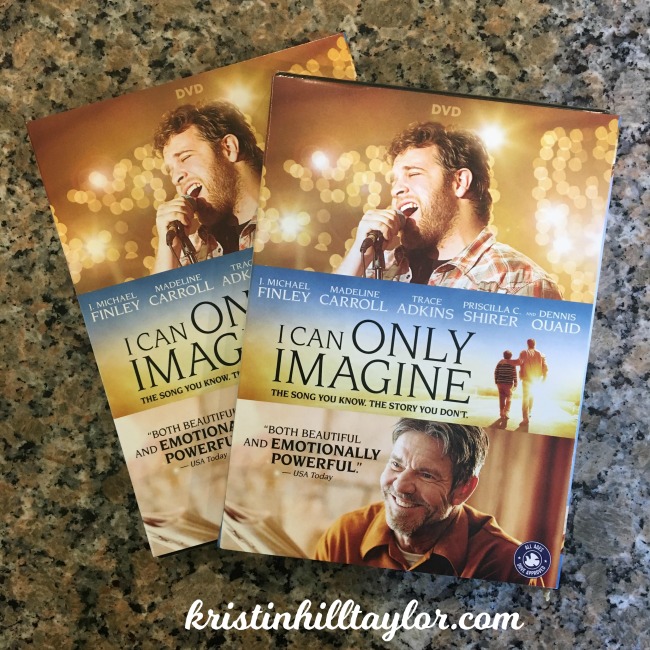 I know the song. You probably do too. But I love learning more about the story that inspired Bart Millard to write this song.

“Dreams don’t pay the bills” was something Bart heard early on from his dad, but it was the same sentiment from the music executives who discouraged him after he arrived in Nashville. As he pursued his dream, he also realized he had to face the pain from which he was running.

The road to forgiveness is messy and hard,
but the redemption that comes is always glorious.

Dennis Quaid and Trace Adkins star in this inspiring true story behind MercyMe’s beloved hit song. Running from a troubled home life and a broken relationship, Bart Millard found escape in music. Hitting the road in a decrepit tour bus, Bart and his band MercyMe set out on an amazing journey none of them could have ever imagined, in this uplifting, music-filled movie that beautifully illustrates the power of forgiveness and God’s love.

This is a beautiful story of relationships healed, dreams realized, and truth proclaimed. Bart recognized his father’s transformation from a man he hated to an example of the man he wanted to become.

On a lighter note, the late ‘80s and early ‘90s culture references were spot on and made me a little nostalgic for my own coming-of-age story. “I Can Only Imagine” is a well-made movie obviously held to excellent standards, which, let’s be honest, isn’t always the case for Christian movies.

I will also say my 11-year-old girl watched this movie with me and I was totally comfortable with her doing so. Younger kids probably wouldn’t be as interested and there are multiple references to the abuse Bart experienced in his childhood home.

The home entertainment release of “I Can Only Imagine” features more than three hours of extras, including seven deleted scenes, seven in-depth features, and audio commentary. This movie from Lions Gate studio is rated PG.

Who wants to have a copy? I’ve got one to giveaway! Between now and Friday, June 15 use the Rafflecopter widget to enter to win. The giveaway is open to U.S. residents only.

I received two copies of this DVD – one to review and one to share – courtesy Propeller Consulting / FlyBy Promotions. The giveaway winner and opinions are not influenced by monetary compensation.