One of my favorite things about the internet is making friends. Melissa Smallwood and I have crossed paths more than once, she’s part of the Adoption Together group I host for adoptive and foster moms, and she’s a multi-tasking mom who writes pieces of her story as time allows.

I’m grateful she’s sharing a piece of her family’s story here in honor of Foster Care Awareness Month. Welcome to the porch, Melissa! 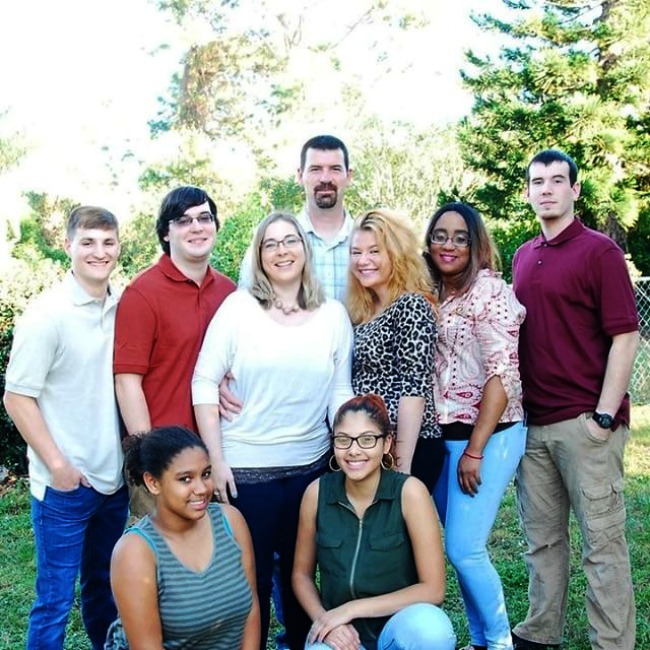 In the world of foster care, a child who enters the system at the age of ten is not likely to be placed in a traditional home setting. They are more likely to be placed in a congregate care setting such as a group home, shelter or residential facility. There aren’t enough foster homes to go around and even fewer homes that are willing to take in children over the age of eight years.

My story is no exception. When I entered the foster care system in middle school, my first placement was in a group home. It was overwhelming and scary. While I continued to exhibit behaviors, including running away, when finally placed in traditional foster homes, it wasn’t until a foster mom dug her heels in and loved me despite my pushing her away that my behavior began to improve. I don’t know that would have occurred if I would have remained in a congregate care setting.

When we became foster parents twenty years later, I told my husband I wanted to take in only older kids because I knew they needed traditional foster home settings to truly thrive. We were licensed for one child at a time and planned to foster only. Proverbs 19:21 tells the tale of how that went: “You can make many plans, but the Lord’s purpose will prevail.”

We wanted what each child wanted for their future.

With our first placement, she wanted to be back with her mom so we wanted that too. For a year, we co-parented with her mom. We shared wisdom gleaned from our twenty years of parenting experience, invited her mom in for holiday and birthday celebrations, shuttled her to visitations and family therapy sessions and even accepted an invitation to be at her mom’s graduation from the program she attended. They were reunited at the one-year mark. We packed up all the things she had accumulated in her 365 days with us, wrote her mom an encouraging note, kept in touch, helped out with childcare on the weekends, and hoped and prayed for the best. But it didn’t work out.

Just seven weeks after reunification, she was back in care. That was devastating not just to our girl but to me too. I had invested much of myself in the reunification and I wanted it for the both of them so much. I realized when it didn’t work out that the little girl in me had wanted it too. I also realized, just like I did as a child, that you can’t want it for a parent more than they want it for themselves.

Thankfully, even though we had accepted another placement in the meantime, we were given a waiver for our license to accept her back as well so she got to come back home to us. And that is where she has been ever since. We adopted her seven months later and while that was never the plan any of us started out with, we now see it was God’s plan all along.

When she came back into our home, we had three placements at once, which, as mentioned earlier, had never been our plan. All three of those girls ended up being a forever part of our family. God’s plan is so much better than ours!

Our daughter needed parents who had been willing to fight for her mom and who would be willing to continue to love and pray for her and allow contact when she was in a healthy place. She needed a mama who had been in her shoes and understood what it was like to NEED someone else to parent her but not WANT someone else to fill the shoes left vacant by a mom who chose something else over her. She needed a family that was a patchwork quilt of kids from hard places who all had rough beginnings in common. She needed a safe place to land and she found that in our home. God truly worked ALL things together for good (Romans 8:28) in her situation.

While there have been bumps in the road and days that I looked up at Him in exasperation, I know for sure she is right where she is supposed to be. She is home.

Melissa Smallwood is a wife, mom to seven, Mimi to five, counselor, writer, and friend. As a former foster child, former foster mom, adoptive mom, and CASA volunteer, a passion for helping children find and stay in families is a driving force in Melissa’s life. When not working or volunteering, you can find her drinking coffee and spending time with her big, crazy family. You can find her online at her website, Twitter, Facebook, and Instagram.

Even if you’re not personally called to foster children, I’m guessing you’ll be encouraged by these previous posts:

Six Ways to Help Foster Families
4 Things One Foster Mom Hasn’t Learned by Rachel Kelly
Fostering Trust in the Journey by Hailey Roach
Growing in Truth: Fear is a Liar by Amberly Houser