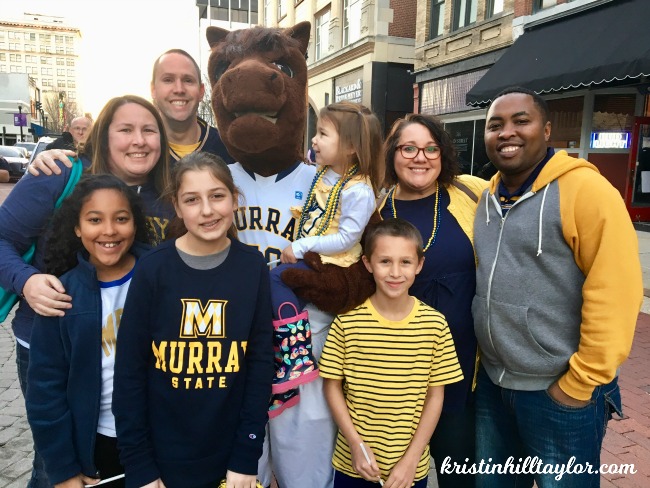 In the winter, we plan our social life around the Murray State basketball schedule. We meet friends for dinner before games. We have friends who travel with us – often in a bus now that we’ve outgrown my minivan – to a few away games.

I have pictures of Cate and Ben sleeping at MSU basketball games. Like her siblings, Rachel can almost spell R-A-C-E-R-S! She recognizes both the mascot and the logo around town. Cate is old enough to have memories of players she’s loved watching. Ben is starting to ask more questions about the rules and strategies and has a piqued interest in playing sports.

The regular season ended on a high note the last weekend of February when Murray State went into Austin Peay and secured its place at the top of the standings. But the actual game was interrupted when a tornado outside caused us to have to leave our seats and seek shelter in a hallway. A piece of metal also poked through the roof, causing a leak on the court. After a three-hour delay, the teams finished the last six minutes of the game. What an adventure!

That night we hung out with friends and fellow fans while we waited. Greg ordered pizza. The kids ate Skittles and drank Sprite hours past their usual bedtimes. We high-fived sweaty players after the game was over. We made memories.

Just this past weekend, we were in Evansville, Indiana, for the Ohio Valley Conference Tournament. Our beloved Murray State Racers were the No. 1 seed and brought a lot of momentum into the tournament. They won the championship Saturday night and earned the first bid to the NCAA Tournament.

Of course, the weekend wasn’t just about basketball. We also ate at some good restaurants, went to a zoo, and made memories with friends.

Watching basketball has helped me be a yes mom
and provided a backdrop for making memories.

The past few weeks have reminded me how being a yes mom is fun. Naturally, I’m a rule follower who wants everyone to follow my rules, but I’ve had opportunities to give the kids treats and grace. It’s fun to throw the routine out of the window. Those things don’t come naturally to me, so being a sports fan has helped me keep perspective on life.

March Madness is the best in our sports-loving world. And now we get to root for our favorite team to be the Cinderella of The Big Dance. Pass the Skittles.