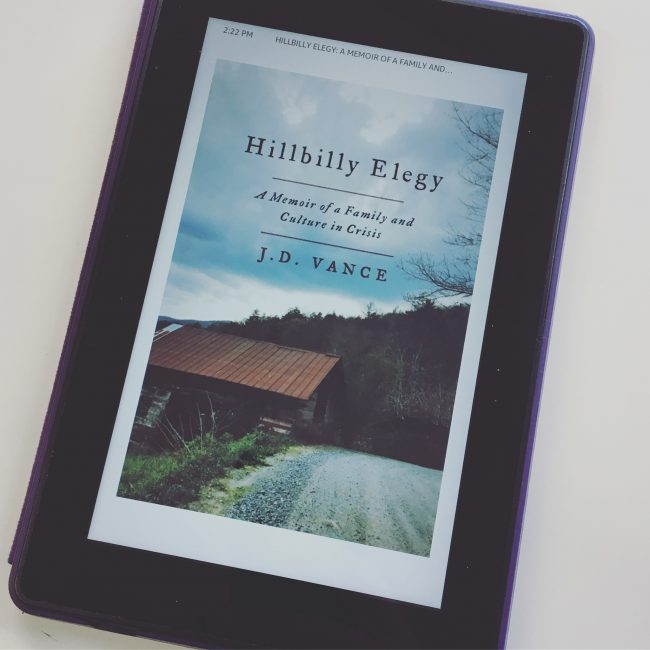 My husband told me I should read “Hillbilly Elegy” by J.D. Vance. Of course, that was after he read a couple passages aloud to me when he was reading it.

I decided to take his advice.

Then when I posted online that I was starting “Hillbilly Elegy,” I got a ton of feedback, most of which was along these lines: “It’s an interesting read!”

Now that I’ve read it, the short answer is “Hillbilly Elegy” most certainly is an interesting read. The beginning is a little heavy (and slow) with background information, but as the memoir progresses farther into J.D. Vance’s life the book becomes even better – and more interesting.

This culture that began for Vance in eastern Kentucky among the Appalachian Mountains and continued into industrial Ohio is one that’s fairly familiar to me, having grown up in Kentucky. It’s the same culture that has been the backdrop for some of my kids’ birth moms’ lives as well as some of the clients I see at our local pregnancy resource center.

Vance’s story hit home for me.

So, naturally, I wrote down some thoughts immediately after finishing “Hillbilly Elegy.” I started the list in first person and then changed it to second person before landing on the collective first person. Regardless of where we grew up, who are our parents are, whether we went to college, or where our stories took us, there are things we can recognize in his story as pieces of our own.

From a former marine and Yale Law School graduate, “Hillbilly Elegy: A Memoir of a Family and Culture in Crisis” is a look at the struggles of America’s white working class through the author’s own story of growing up in a poor Rust Belt town.

Hillbilly Elegy is a passionate and personal analysis of a culture in crisis — that of poor, white Americans. J.D. Vance tells the true story of what a social, regional, and class decline feels like when you were born with it hanging around your neck.

As the family saga of “Hillbilly Elegy” plays out, we learn that J.D.’s grandparents, aunt, uncle, sister, and, most of all, his mother struggled profoundly with the demands of their new middle-class life, never fully escaping the legacy of abuse, alcoholism, poverty, and trauma so characteristic of their part of America. With piercing honesty, Vance shows how he himself still carries around the demons of his chaotic family history.

This 273-page book was published by HarperCollins Publishers (June 2016).

J.D. Vance grew up in the Rust Belt city of Middletown, Ohio, and the Appalachian town of Jackson, Kentucky. He enlisted in the Marine Corps after high school and served in Iraq. A graduate of the Ohio State University and Yale Law School, he has contributed to the National Review and is a principal at a leading Silicon Valley investment firm.

I’m reviewing this book just because I wanted to. Nobody gave me anything to do so. I actually borrowed this book from the library. But I’ve already recommended it to multiple people.