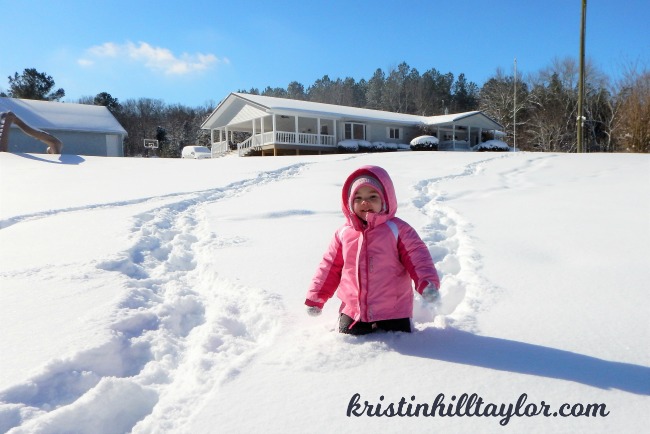 Today is Snow Day No. 8. EIGHT. And by snow day I don’t mean my kids aren’t in school but we’re driving around doing other things.

I mean the kids and I haven’t left the house since THURSDAY LAST WEEK. That’s more than a week at my house.

My husband has been out on his four-wheel drive truck to work. He’s actually opening a new office this week. He even invited me to go with him yesterday, but hauling the kids to work with him didn’t sound fun as much as I wanted to get out the house.

I debated getting out yesterday, and then decided I should and could. But then a series of events — including my potty-training toddler wetting her pants and floor before we walked out and then getting in the snow on the way to the minivan as well as frozen windshield wipers — took us forever to get out of the house. Then when we actually started to pull out, my tires couldn’t get any traction on the sheet of ice beneath.

So we didn’t leave. I have high hopes for getting out today because Greg moved my minivan off that sheet of ice and not it’s better positioned for freedom.

I’ve been intentional about making the most of this past week.

I haven’t been perfect, obviously. I’ve gotten frustrated. I got jealous when my husband walked in with a Penn Station cup because that meant he’d eaten lunch out. I’ve been eager to leave the house and interact with other people the past couple of days.

But I’ve mostly enjoyed this Christmas Break Do-Over with my favorites. I’ve liked being in comfy clothes, having time to absorb life and what I’ve been reading, playing games and working a puzzle.

Being intentional is about recognizing the truth of what matters when circumstances are fighting against that. Being intentional is when my best friend shows up for 20 minutes after a drive that takes about that long (which is twice as long as usual) just because she wanted to connect in person and knew I  did too.

Being intentional is making the most of
whatever weather God brings your way.

I’m linking up with Five Minute Friday today. It’s simple: Set a timer and write for five minutes flat. Then link up with us.