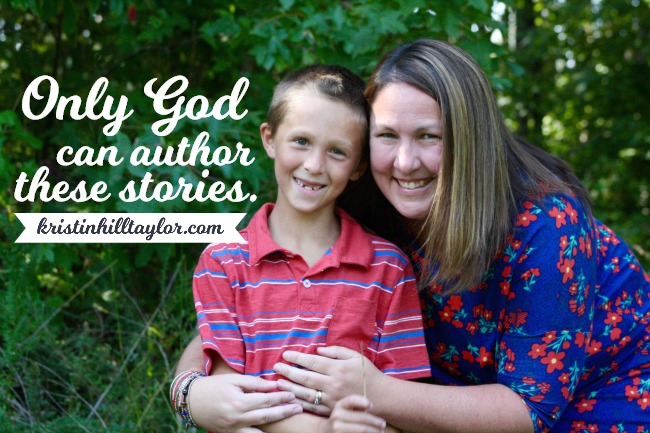 In honor of National Adoption Awareness Month, I’ve been sharing pieces of other people’s stories that were contributed to my book, “Peace in the Process: How Adoption Built My Faith & My Family.” I’ve loved being able to introduce you to some of the other moms in my adoption community.

But Ben turns 8 tomorrow, so I wanted to share a piece of his adoption story. I love that all three of my kids’ birth moms were willing to share some of their perspectives in my book, so I’m including an excerpt that includes some words from his birth mom, Leigh.

We left her house that was about seven miles from ours believing she was committed to her decision, but we hadn’t talked with the birth father yet and had one hesitation: We live in a typical small town, where people know each other’s business. We love our adoption stories – and we love telling our adoption stories. But some details of adoption don’t need to be tossed around small-town gossip circles – or even among my husband’s large extended family that has lived here for generations. Leigh was on the same page, uninterested in small-town drama.

We met with the agency anyway, but the more we talked about it the more clear our decision seemed to be. Conversations and prayers led to peace, erasing our hesitation. When we returned from Texas, we proceeded with this second independent, private adoption we weren’t expecting but were thrilled to embrace.

We meet Leigh at her next appointment and saw our son via ultrasound on August 11, 2009. He was twenty-five weeks in his birth mother’s womb and weighed one pound, seven ounces – so much like his big sister’s storyline.

Only God can author these stories.

Like Cate, we thought we’d name him after someone in our family, but we couldn’t settle on the nickname version of Greg’s grandpa, William, who went by Bill – the one we thought we’d honor. Greg wanted a Bill; I wanted a Will. So we went to the Bible instead of our family trees and agreed on Benjamin. His middle name – Lucas – is my grandpa’s middle name.

We continued meeting Leigh for doctor’s appointments. “We” usually meant two-year-old Cate and me. Conversations with Leigh were easy even though I know making an adoption plan was hard on her momma heart. In Greg and me, Leigh found what she wanted for this baby boy – financially secure, religious, well-rounded people, in her words:

“Having you two involved in the latter part of pregnancy was very important to me and helped me with the decision of adoption,” Leigh told me as she reflected on the adoption more than four years later. “It made me feel better getting to know the two of you more and being able to accept that this was the right decision I was making.”

Leigh’s dad and stepmom as well as others in her life were supportive of her decision and kind to Greg and me when we briefly met. We also found an ally in the obstetrician, who was a family friend of ours and had taken Leigh and our unborn baby under his care. “My family and everyone in my life at that time supported me of my decision, which made the whole process much easier,” Leigh reminisced. “I was happy to have that support system.”

Adoption had blessed our family once and God was doing it again, in some of the same ways and in plenty of different ways. In the end, God’s faithfulness remained and He covered our lives with the peace that surpasses anything we can truly understand. 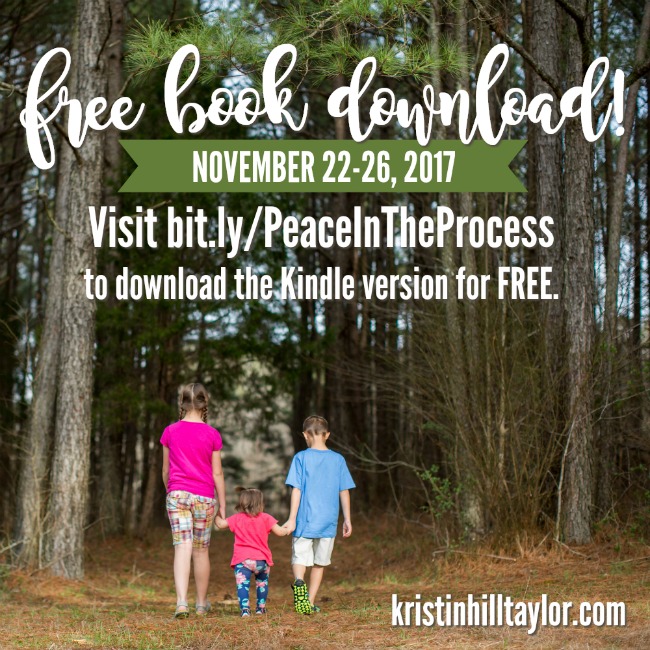 And look what I have for you, in honor of National Adoption Awareness Month, Ben’s birthday, and Thanksgiving … a FREE (electronic) copy of my book! Whoo-hoo! You can read Kindle books on any device, so be sure to download this if you’re interested in God’s story in my life. (Read about how to read Kindle books with the free Kindle app!)

I have one more guest next week as November wraps up, but make sure you read the stories already shared if you’ve missed them: Makenzie Shewcraft shared on God surprising her with an open adoption. Monica Bidwell talked about how God adopts us all. Caitlin Dunbar offers hope for those waiting … for anything.