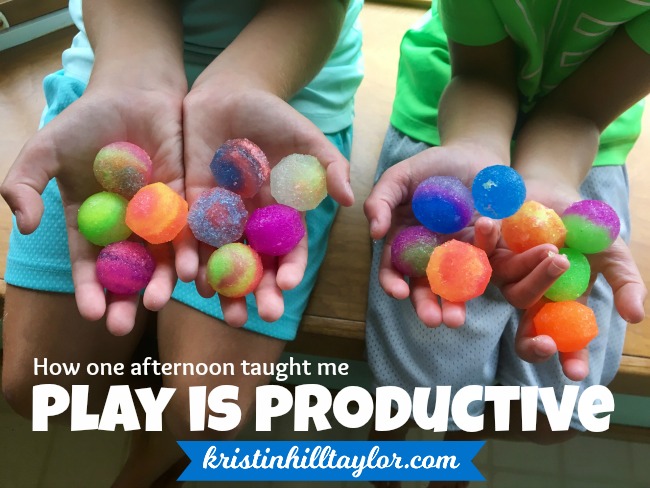 Ben had been asking to make these Power Balls. He would ask when I was changing Rachel’s diaper, in the middle of a phone call, or as we were getting ready to leave. I said no a bunch of times and wouldn’t commit to when making a craft would be a good idea.

(Confession: Y’all, I can be a fun mom, but I don’t really like to have craft time with my kids.)

My mother-in-law – who is the best there possibly could be – watched the kids Wednesday morning while I was volunteering at the local crisis pregnancy center. And she helped Ben and Cate make Power Balls.

That same afternoon they wanted to make more with the powder that remained while I caught up on work – hello, Independence Day weekend that felt like a much-needed vacation – and Rachel napped. I said yes, I mean, I didn’t really have a reason not to because they could do it themselves.

They made 19 bouncy balls – some of which glow in the dark. They took turns, made some for other people, and spent the afternoon playing together.

They asked for more, and I found them for less than $10 on Amazon, so I bought them another box. I’m probably won’t tell them I have them until it’s a rainy afternoon and some sibling unity is needed. I may not win any awards for being a good play-with-your-kids mom, but I will take the sibling teamwork that came with this one specific afternoon of play.

Plus, hey, I got a lot done that afternoon. And perhaps I owe some thanks to whoever bought this craft for one of my kids who knows how long ago as well as my dear mother-in-law.