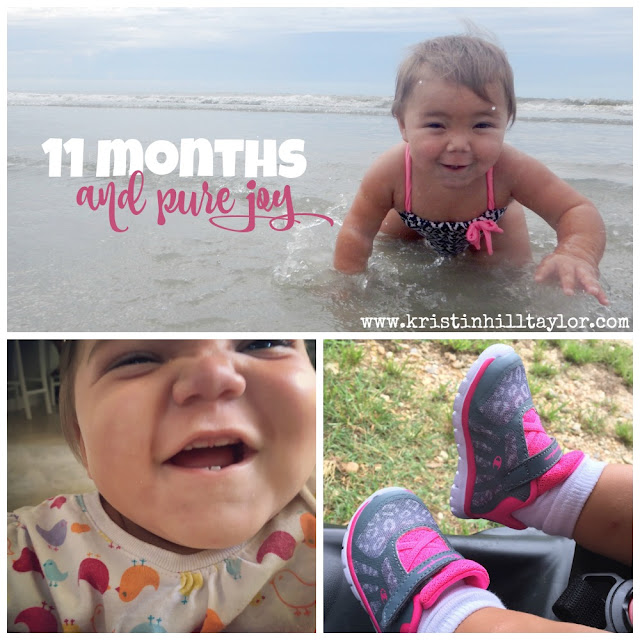 I pretty much have Rachel’s first birthday party planned. And I’m excited about it.

Yet last week when someone asked me how old she was, I immediately responded, “10 months.” Greg said, “You could say 11 months because she’s pretty much is.” Right. But as much as I’m excited to see her grow up, I recognize this is {most likely} our last baby.

Generally, babyhood isn’t my favorite, but this third baby came as a surprise from God exactly when we needed her joy-filled demeanor. She fits perfectly in our family and is such evidence of God’s faithfulness.

At 11 months, all of that remains true.

She is continues to be a joy, this one. She adores people, especially her brother and sister. Some of our favorite nights as a family have involved laying on her bedroom floor playing.

In the past month, Rachel discovered her love of the ocean, hasn’t rejected any food we’ve given her, wore shoes for the first time just the other day, and had her fourth top teeth come through at the same time.

She prefers to old her own bottle and still drinks a few bottles a day. Earlier this week I put formula in a sippy cup, which she drinks water from fine, and she rejected it. But she’s happy to drink whole milk out of a bottle. Next up: Trying whole milk from a cup. We are on our last can of formula so we’ll see how the transition from a bottle goes.

She blows kisses often, waves sometimes, and talks on various items as if they were phones. She claps when someone says, “Yay!” or when she hears music, which also prompts bobbing of her head.

Pure joy, I tell you.