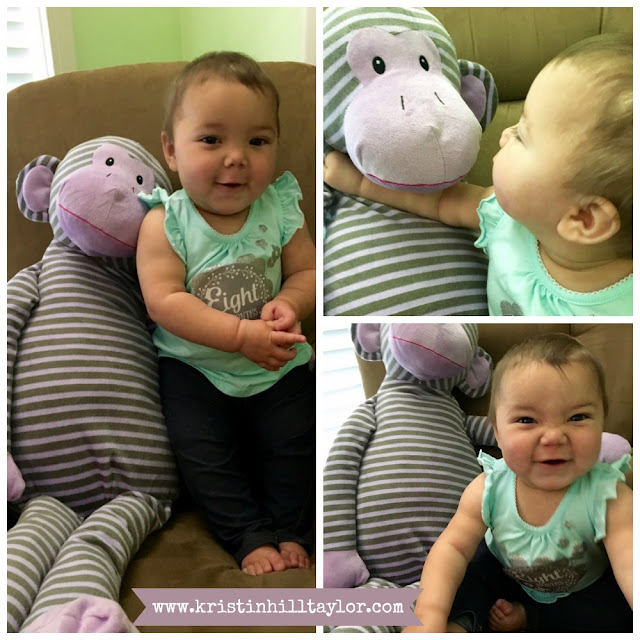 Rachel is into … everything, literally and figuratively. I’m busy making sure she doesn’t eat anything she’s discovered on the floor and cleaning up things like trash and water from the diffuser she’s pulled over.

That’s right, she’s on the move in the fullest sense – crawling and pulling up all over the place. It’s more exhausting {for me, at least!} than the previous phase, but I really love the discovery that happens. Like the door stop at the base of the wall behind some bedroom doors. That’s been a new favorite. And at least it’s safe in the sense she won’t choke on it.

She’s wearing some 6-to-9-month clothes, but rapidly moving toward 12-month ones. With this week’s cold front, I had to dip into the stash of fall clothes I’d bought her along the way. Obviously, the long-sleeved 12-to-18-month shirts she’s worn this week aren’t going to fit her in the fall, so that’s good to know. I clearly underestimated her growth!

She’s sleeping about 11 hours most nights, but sometimes she wakes up and needs to be consoled back to sleep. Apparently baby nightmares are a thing. And sometimes she thinks she needs to eat, but, thankfully, that’s rare. Her bottom two teeth popped through and she’s obviously working on more.

She loves eating, laughing at her brother and sister, standing up in her crib when she’s ready to get out, and chewing on her baby toothbrush. I’m still working on a way to bottle up her scrunchy-nose smile and the one with her tongue poking out because this girl is a sweet joy that I have no doubt will embrace adventure.