It’s Five Minute Friday time! Hooray for the weekend! Each week, Kate Motaung hosts a flash mob group of writers. She issues a prompt and people write for five minutes. The prompt this week: WHOLE. 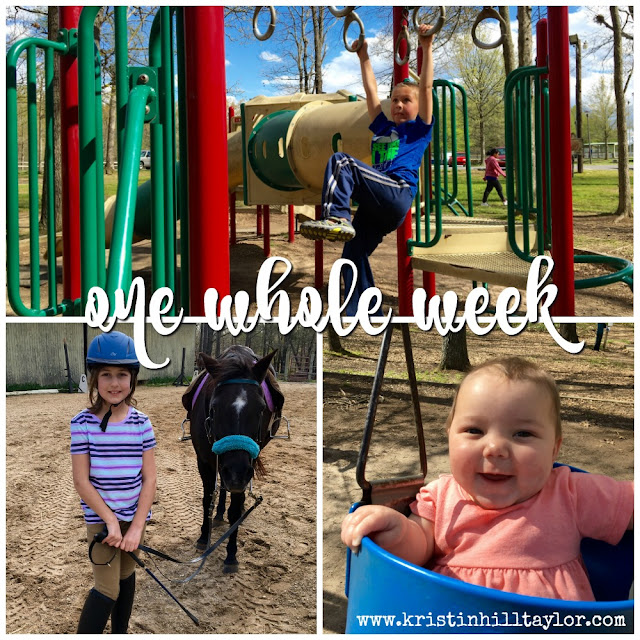 Last week the essence of Spring Break clicked in his kindergarten mind: “We are going to be off school a WHOLE WEEK?”

And then my third-grade girl who sees the world in black and white piped up: “Well, it’s more than a week. It’s nine days.”

“Yes, when you could the weekends, but you never go to school on the weekend.”

And then I’m pretty sure that’s when Ben broke out in the days of the week song. Telling time, in minutes or days isn’t his strong suit.

But he did recently learn how to ride his bike, the two-wheeler as his big sister says. So he’s been doing a lot of that this week, this WHOLE WEEK off school.

Cate took a couple horse riding lessons. Rachel worked on her army crawl, enjoyed the swing at the park, and basically smiled every time she say her big brother and sister.

We saw friends and worked on keeping the house clean (hello, trying to sell a house with children home for a WHOLE WEEK PLUS TWO DAYS …). We slept later than usual and watched some extra episodes of “Fixer Upper.” We dreamed about the summer adventures coming sooner really rather than later and we officially issued word our house is for sale.

A whole week home is good for a momma soul too. The break in the routine allows for some work, yes, but plenty of rest and play too.