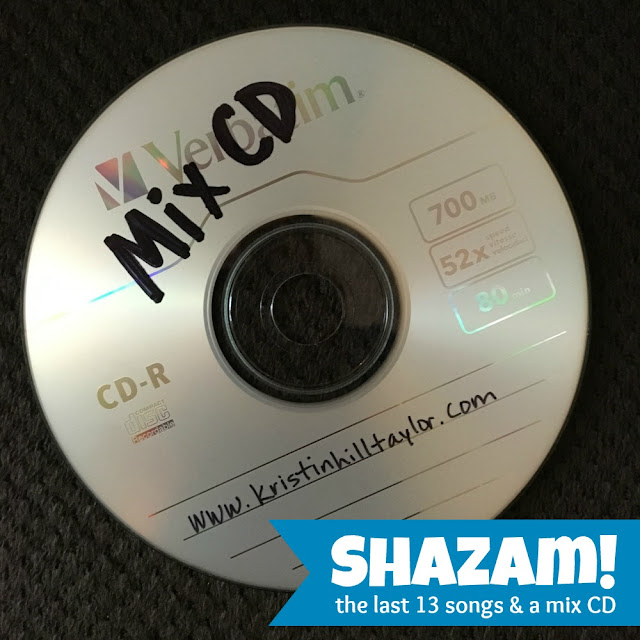 I’ve been known to jot down lyrics to a new-to-me song I want to look up later, especially while watching TV shows or movies. Now with technology, I just click on the Shazam app, which “listens” and then tells me what song it is.

Okay, I realize I sound way behind the times starting this post like this is a new technology. BUT I’ve just been appreciating it lately and thought it would be a good time to share.

I probably sound old admitting I recently rewatched “Sisterhood of the Traveling Pants” and the sequel. {Um, I just noticed you can buy them as a double feature!} I owned the soundtrack to the first at some point and am tempted to dig through a box of memories to find it. It’s really good, y’all.

Anyway, back to Shazam. I’m going to share the last 13 songs I Shazam-ed. Why 13, you ask? Well, that happens to be how many are on my list since the beginning of the year.

{Side technology note: Did you know you can stream music for FREE with Amazon Prime? Some of these songs are available there, so following the links!}

And, hey, it’s Monday, so let’s have some fun with this. If you share in the comments your last Shazams, or at least the last new-to-you songs you’ve discovered some other way, you’ll be entered to win a mix CD from me.

Let’s be honest – I’m sounding older by the moment. I know there are all kinds of ways to make playlists online to share, but who doesn’t like real mail and a mix CD to listen to while you’re driving around? {Tweet that.} Hey, at least I’m not going to send you a mix tap – because then I’d be really, really old.

So, use the Rafflecopter below for other ways to enter and be sure to log your comment below as an entry to officially count. I’ll choose a winner on Monday, March 21. This giveaway is open to U.S. residents only.

Want more insights?Subscribe to get new posts and/or a monthly newsletter with content not available on the blog in your inbox. When you subscribe, I’ll send you a FREE #choosingJOY printable.