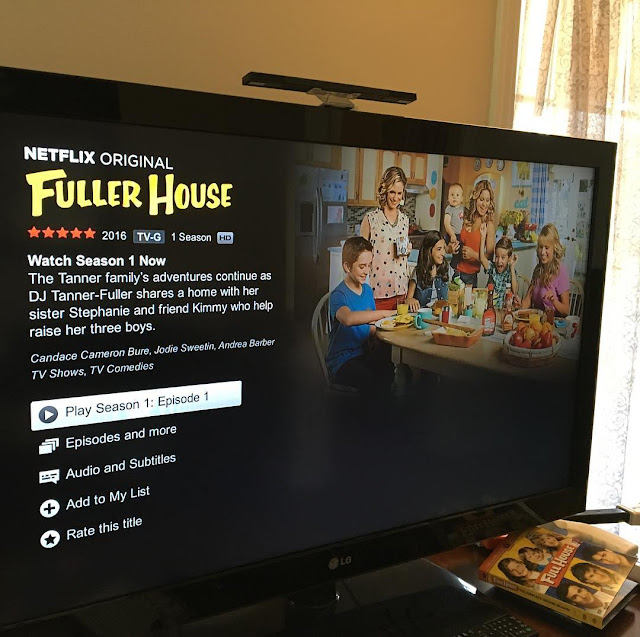 My kids and their friends have been counting down the days until “Fuller House” premiered on Netflix. In preparation, we have been watching the first two seasons of the original “Full House.”

While feeding Rachel this morning, I decided to watch the first episode. Okay, yeah, so maybe I was pretty much as excited about the kids. My Instagram post of the show pulled up on Netflix even said: This is happening. Just one episode, maybe. The kids don’t have to know.

Within the first few minutes, I knew my kids – who are 8 and 6 years old – were going to know because I was going to have to tell them the show wasn’t appropriate for them. I didn’t expect to have to decide that this morning.

Growing up watching “Full House,” I appreciated the banter and situations that were reminiscent of the show set 29 years ago in the same house. I laughed throughout and enjoyed the current episode mirroring the original with the crew huddled around the baby singing “Meet the Flintstones.” I’ll probably watch more episodes – when the kids are at school.

But I didn’t appreciate the content that is inappropriate for kids and didn’t even add anything to the show. Obviously, this show is aimed at my generation and not our kids. Telling my kids that isn’t exactly the kind of after-school conversation I’m looking forward to having – but it’s better than explaining to them what an acid trip is and having to worry if they’ll make boob jokes next time we’re at Dairy Queen.

_____________________
Like I said, we’ve been watching the original show. So if you’re looking to introduce your kids to the Tanners, maybe start there. You can get all the seasons in one set on Amazon or buy the individual seasons, although I can only vouch for the first few at this point in my viewing as a parent.

_____________________
I’m linking up with Kate Montaung for Five Minute Friday. This wasn’t the post I had in mind when I saw the prompt of MORNING last night. But when I sat down to write this morning, this is what was on my mind. If you don’t know about Five Minute Friday, you just need to know this: Kate gives a word and then writers write for five minutes. Then everybody links up together at her place. It’s like a writing flash mob, and we’d love for you to join us.

Want more insights? Subscribe to get new posts in your inbox and a monthly newsletter with content not available on the blog. When you subscribe, I’ll send you a FREE #choosingJOY printable.