January and I have a history.

It’s the month I decided to follow Jesus two decades ago, we met Cate’s birth mom nine years ago, Greg proposed 14 years ago, Ben’s adoption was finalized six years ago, and I was diagnosed with diabetes 12 years ago. In 2012, it was January when decided to adopt a third time, and while we waited more than three years for that to happen, I remember the day God freed me from those fears. Last January, we decided to go on a mission trip to Guatemala, a trip that’s still rocking my world.

Honestly, this January hasn’t had big moments. Rather it’s been the kind of month where I’ve felt settled with where I am and who I am. I see God working in the everyday moments. I get teary thinking about all that God has done for us, in Januarys and all the other months of our lives. 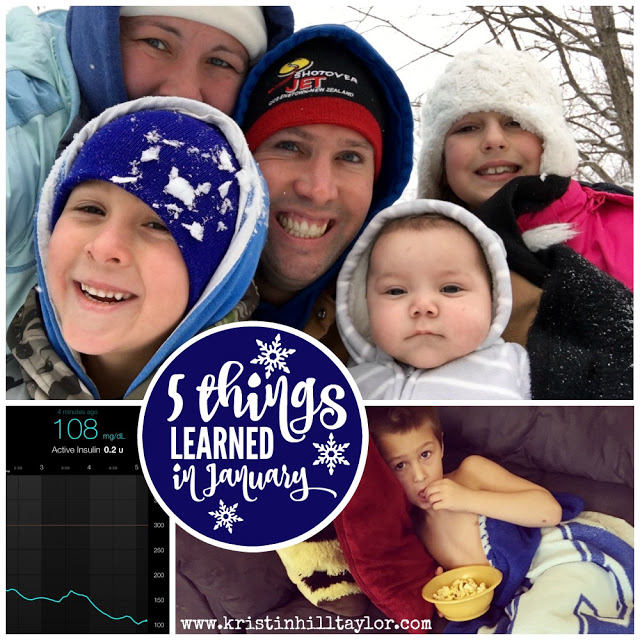 In no particular order, here some things I’ve learned this month …

Okay, so, really, I’m a summer girl. But if we’re going to do winter, let’s have some snow days! And then when the snow days are over, let the sun come out and the snow melt. Clearly, I’m an all-or-nothing girl too.

And, yes, I’ve had snow days before, but we had a couple in one week (the same week the kids already had that Monday off in honor of Martin Luther King Jr.) and having everybody home FOR TWO DAYS PLUS THE WEEKEND was so great.

One snow day was a Wednesday, and then the roads were fine enough for a delayed-start school on Thursday, which worked out well because I needed to go to the grocery. And then more snow came so the kids were off school again Friday. Hello, long weekend! And Greg stayed home Wednesday and Friday too, which is a definite perks of owning his own business.

We played games, ate warm foods, drank hot chocolate, made snow cream, and hung out with neighbor friends. One day our best friends were even here for eight hours. We managed to play five games of various versions of Settlers of Catan while the kids enjoyed each other’s company.

The whole third week of January was a sweet balance of each of doing our own things and hanging out together as a family.

I don’t drink hot drinks. Not coffee. Not tea. And I used to only want real hot chocolate, like the kind my mother-in-law makes or the kind that comes from a coffee shop. But I bought this on a whim in January. And we liked it so much I bought it again. And, well, those snow days I mentioned gave us ample opportunity to heat some milk to mix with these packets.

3. Strep throat can still happen even when someone doesn’t have tonsils.

Ben, who is 6 years old, and strep throat are not strangers. Since he was 11 months old, he’s had it 16 times. But only two of those have been since his tonsils and adenoids were removed nine months ago. So, basically, we’ve had a good stretch lately.

Ironically, Ben was at the allergist the day before his latest strep diagnosis and the nurse practitioner even looked in his throat, which was red and irritated by the time the pediatrician looked at it. Within hours of leaving the allergist, Ben started running a fever. The pediatrician did say the way the winter weather has been back and forth around here is hard on kids with allergies.

Medtronic Diabetes has the best customer service of any company I’ve ever used for anything. When I called to order some glucose sensors (a little piece of technology that is inserts near where my pump is inserted and monitors my blood sugar levels) and the lady told me I could get a free Connect , which is a small Bluetooth device that lets my pump and sensor communicate send data to an app on my phone.

{Read more here about my diabetes diagnosis 12 years ago and what living with a pancreas that doesn’t produce insulin in like.}

5. Those DVR shows will have to wait.

Greg and I started watching “The West Wing” when all our regular shows took a holiday break. Now there are multiple episodes of “Madam Secretary,” “Blue Bloods,” and “The Blacklist” on the DVR just waiting for us. We can’t stop watching Josiah Bartlet and company.

{Speaking of President Bartlet, why is Jed a nickname for Josiah?}

🎶 The best things in life are straight from His

He lost a bottom tooth last Saturday. Today he los

My friend @katie_cunningham85 always has a book or