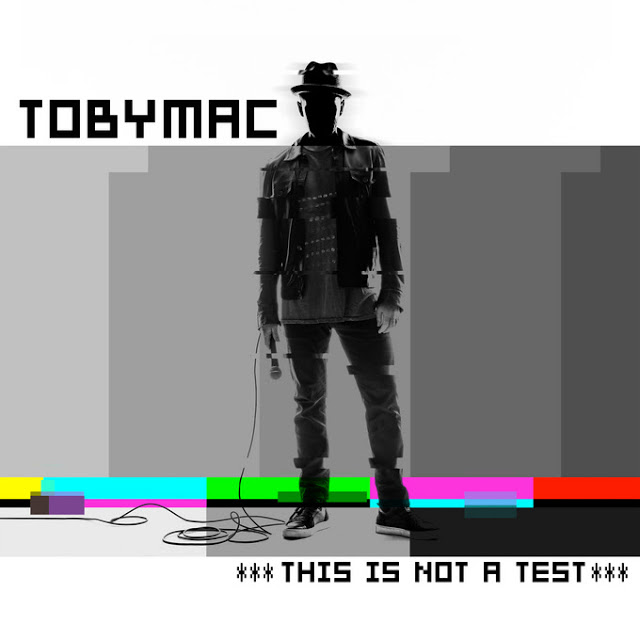 When I got an email about reviewing TobyMac’s new album, I said yes for my kids, especially my son. I like TobyMac well enough, although I admit I sometimes long for the days of dc Talk. But I love watching my kids dance while buckled in the car when TobyMac comes on the radio. I want my kids to like music that speaks truth into their lives. So, if that’s what TobyMac can do for my family, yes, send me some TobyMac.

We’ve been listening to “This Is Not a Test” while driving around town. Like with any new album, we had our instant favorites. My 8-year-old Cate loved “Lift You Up,” a song that features Ryan Stevenson. She said she likes the beat and lyrics: “We’ll lift you up ‘cause you ain’t never going to let us down.”

(We’ll be having a conversation about how ain’t isn’t a word soon, so no worries there.)

My 5-year-old Ben has a personality that TobyMac’s music fits, if you know what I mean. He’s high energy and always moving. He had trouble choosing a favorite but landed on “Backseat Driver,” which features artists Hollyn and Tru.

I really liked “Love Broke Thru” and “Fall.” They each affirmed truth God had already been teaching me. I like when songs do that. And, of course, we were happy to recognize “Beyond Me” from the radio.

{TobyMac in “Love Broke Thru”}

Okay, so, admittedly, I like that “Love Feels Like” features dc Talk. And you’d know this if you saw our car dancing as my kids and I listened to TobyMac’s new music.

ABOUT TOBYMAC :: Toby McKeehan – known professionally as TobyMac – is a husband, father, performer, songwriter, producer, and businessman. Growing up in the northern Virginia suburbs adjacent to Washington D.C. helped instill his love for rap music. While attending Liberty University during the mid 80s, Toby met Michael Tait and Kevin Max Smith and these three friends formed the Grammy-winning, platinum-selling group dc Talk. Toby began his solo career in 1999 and released his first solo album in 2001. Between then and now, he’s released four other solo studio albums and a live album.

Starting with dc Talk, and then going solo when the group disbanded, Toby still clings to such notions as hard work, persistence, patience, and the power of music, which he insists is still what keeps him going. “It’s the truth,” he says. “I still believe that a song can penetrate a heart. I believe God can use a song to open someone’s mind and heart.”

GIVEAWAY :: Use the Rafflecopter widget below for multiple ways to enter this giveaway. A winner will be randomly chosen on Thursday, Aug. 13. This giveaway is open to U.S. and Canadian residents.