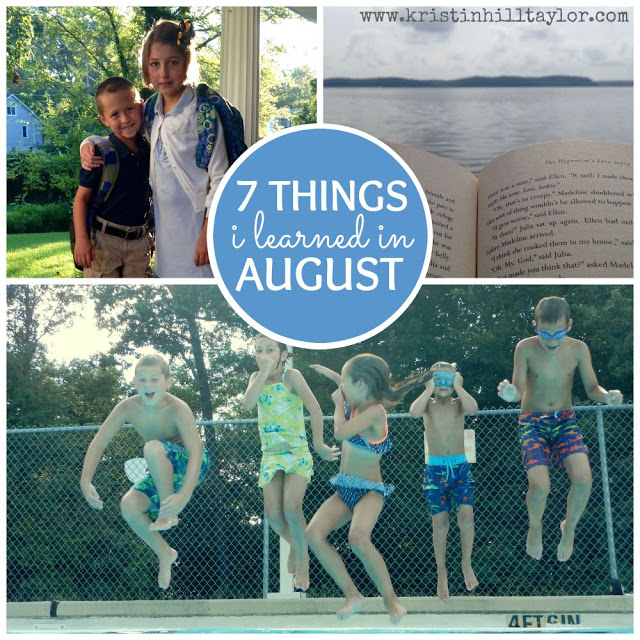 I’m just going to skip the part about how fast August has gone and how I can’t believe it’s basically fall. Even so, August managed to teach me some things. In no particular order, here are seven things I learned this month …

1. Having Rend Collective release one song a time when I pre-order the album is fun and frustrating.

I love getting an email from iTunes telling me I have new music, but I wanted all the songs quicker than they were available. Talk about a lesson in delayed gratification. {The whole new album is available now.}

And, for the record, Rend Collective isn’t the first band to do this, just the one I’ve been playing over and over again.

2. One Tree Hill went off the deep in end for season nine, affirming the fact shows should end at their peak and not drag on.

I loved OTH … for about seven seasons. And I certainly liked moments of the eighth and ninth seasons, but more than anything I just kept watching because the end was in sight and I needed to know what happened with my friends in Tree Hill, even if Lucas and Peyton had moved on. I could have done without most of the ninth season, but the finale episode itself was a good ending.

3. Sometimes books are exactly what you need when you open them up.

Okay, so I didn’t just learn this, but I remembered it as I read Emily Freeman’s “Simply Tuesday: Small-Moment Living in a Fast-Moving World” and Kristen Strong’s “Girl Meets Change: Truths to Carry You Through Life’s Transitions” this month.

This is a story from my life this month. And, really, as much as I like order in my life, getting back into a school-time routine always comes with some resistance, even from me. So we just jumped in, although admittedly we’re all missing being able to jump into the pool! But we’re doing well and the new school year is off to a good start for both kids. I’ve been motivated to get some things done while they’re at school before we add a baby to the mix!

Specifically, I’ve watched two video series :: “Living Life Together: The Rhythm of Grace, Rest and Community” by Shauna Niequist and “Pulling the Thread: Unraveling Your View of God’s Calling” by Jen Hatmaker. Greg and I also are making our way through “Have a New Kid by Friday” by Kevin Leman.

While watching each of them, I’ve scribbled notes and questions and scriptures and quotes in my journal. I’ve quoted things to friends and send invites to Right Now Media because I don’t want people missing out.

6. The Project Life App is awesome.

I’ve never gotten into digital scrapbooking. Sure, sometimes I print out blog posts to include among the pictures. But I’ve loved the traditional paper and embellishments of scrapbooking, even if I’m mostly fitting pictures into divided page protectors that are the foundation of the Project Life philosophy. But I downloaded the app a couple months ago at the recommendation of a friend. And then this summer I started using my iPhone for more pictures.

One afternoon at the pool I decided to mess around with the Project Life App and ended up scrapbooking five pages right there. On my phone. At the pool. And then I ordered 12-by-12 pages that showed up in my mailbox and were then slipped into page projectors in an album. I made another layout while sitting on the couch at my mother-in-law’s after a fun afternoon. Just this week, I made five layouts on the way home from Louisville.

The quality is superb and the convenience is amazing. I’m looking forward to the most recent batch arriving in my mailbox.

7. As I was thinking about coming to college 18 (!!!) years ago as college student moved back into our small town this month, I realized HALF OF MY LIFE has happened since then.

HALF. Whoa. That’s a crazy realization and place to be in time. {And, of course, I wrote about it and then I submitted the post as a letter to the editor for The Murray State News.}

How’s your August been? Tell me about it.