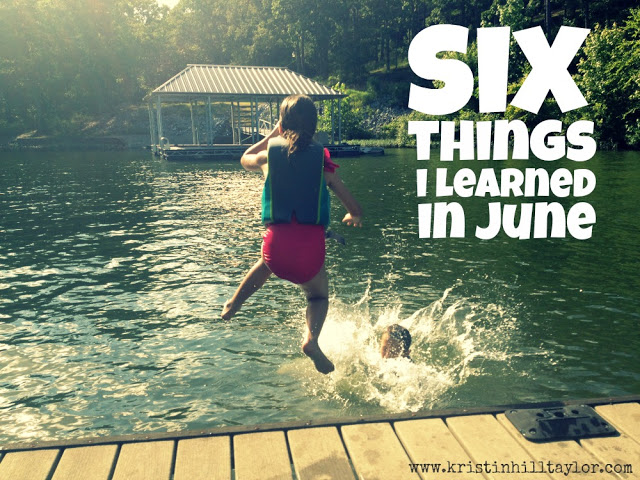 As each month ends, I find myself saying I can’t believe it’s finished. BUT, REALLY, I CAN’T BELIEVE JUNE IS BASICALLY OVER. I recapped some of our summer earlier this month because I don’t want to forget the goodness that’s happening. Yes, life has been busy, but it’s been sweet and joy-filled too. And I want to remember.

So before I forget, here are some things I learned in June …

1. Naming a baby is apparently easier than naming a lake house. I wrote about names and thought about names often the past several weeks. But the short story is we’re adopting a baby girl we’re naming Rachel Elizabeth. {She’s due Sept. 28!} And our lake house is called Shelter Point Retreat.

2. Zac Brown Band has new music! So what if I’m late to the party? It’s been on repeat now that I caught up. {You should get it too.}

3. You can trap a mouse OR TWO with a Nutter Butter bar, colander, and a piece of wood. Our friend Bryan caught TWO MICE at our new lake house when we stayed out there earlier this month. He’s my hero for catching them from his self-made mouse trap. Greg permanently disposed of them, if you know what I mean, and then soon after scheduled the exterminator. Two more were caught in a glue trap. So that’s four, if you’re counting. FOUR TOO MANY. There’s evidence that indicates that may not be all. Yes, THAT kind of mouse evidence.

{You may remember from my camping trip in the spring: I don’t like mice.}

4. I really enjoy reading fiction set in the South. Okay, so I didn’t actually just learn this. But I remembered it as a zipped through Mary Alice Monroe’s Lowcountry Summer Series. {The Summer Girls. The Summer Wind. The Summer’s End.}

For what it’s worth, I like musicians from the South too. Evidence: Zac Brown Band. Third Day. Needtobreathe. Darius Rucker.

6. I earned my first money for speaking. Now I didn’t say it was much money, but I wasn’t expecting any money. I actually spoke twice this month. First, I spoke at a conference in southern Illinois. And then a few days later I spoke to a local Methodist women’s group. Neither went as expected {and that’s not a bad thing …}, but both opportunities included evidence of God’s presence and plan. Both groups gave me sweet gifts for coming and the local group tossed in a small check that was such a pleasant surprise.

How was your June? I’d love to hear what you learned.