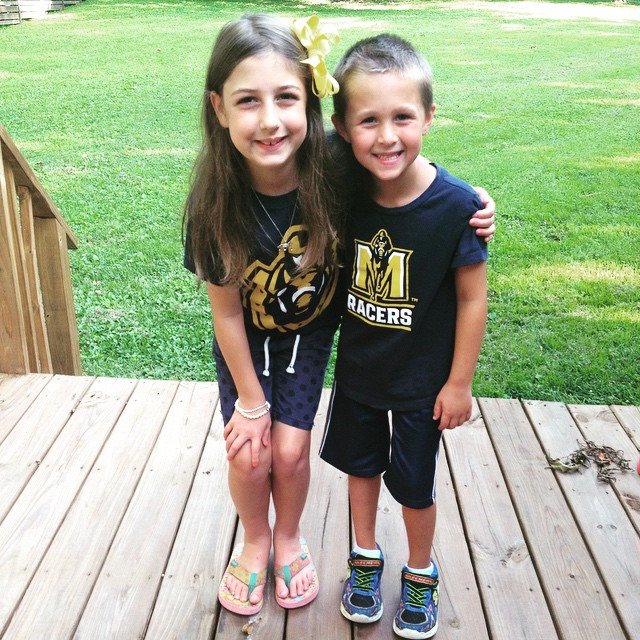 Hey, Friday, you’re acting too much like a Monday. Come on, you’re better than that.

Let’s back up, Thursday night was so much fun. We gathered with hundreds of other Murray State fans to watch the NBA Draft on the big screen at the basketball arena BECAUSE OUR BOY CAM PAYNE WAS THE 14TH PICK. Y’all we love our mid-major team (is that still a thing?) and, admittedly, were a little sad when Cam declared he was leaving after his sophomore year.

But it was so fun to celebrate his success and see our alma mater’s name. I read articles and posts on social media all evening while Greg and I finished season five of “One Tree Hill.” (Let’s not talk about how I almost asked Google who Lucas called. I’m going to find out tonight. I want it to be Peyton. But I think it’ll be Brooke. And I’m not sure how Lindsey fits in.)

So I woke up this morning excited it was Friday. As a stay-at-home mom, especially in the summer, I’m not sure why Fridays are different than other days, but they still feel different, like the door to the weekend is cracking open.

Plus I still had this once-a-reporter-always-a-reporter adrenaline in me as I read more articles and tweets this morning about Cam being a lottery pick for the Oklahoma City Thunder. THIS MORNING AFTER EVERYONE SLEPT UNTIL 7:30! It’s like a miracle with Ben, who actually slept until 8. Happy Friday to me.

And then reality reminded me that I should call the pediatrician first thing. Ben had been peeing excessively. I laid in bed last night and made a plan to call and get a professional’s opinion. Part of me chalked it up to an easily distracted 5-year-old boy with a short attention span. Like he doesn’t want to stop playing to go to the bathroom. BUT there have been daytime and nighttime accidents. And frequent trips to the bathroom. And then accidents not long after he just went.

He and I were both frustrated, so I swallowed my momma pride and called the pediatrician. And the nurse didn’t think I was crazy mom and wanted me to bring him in. Appointment made.

And then Cate woke up, running a fever, coughing and talking about her congestion. She was like this on Wednesday – but I figured she was worn down from church camp earlier in the week. Thursday she seemed like herself. But now here on Friday she was puffy-eyed and lethargic again.

So I called the pediatrician again. I talked to a different nurse, but she also trusted my momma instincts and added Cate to the appointment I already had.

Not much later, Ben showed me his toes. Earlier in the week, there were a couple red spots that he said itched. So I gave him some anti-itch cream. Seems reasonable, right? Well, today those innocent red spots were blistery. His toes were swollen and the blisters increased and multiplied throughout the day.

I didn’t bother calling the pediatrician a third time. I just added it to our list of things to discuss during the appointment.

I haven’t even told you about how I rushed my lethargic, ailing kids out the door to meet the locksmith at the lake house at 10 a.m. The lake house is about 25 minutes from our house, so at 9:30 I herded my two cats … er, kids … out the door, promising they could watch a movie when we got there.

At 9:50, the locksmith called and said he needed to reschedule. Except I didn’t have a cell phone signal at that point so I got the voice mail when I got the lake house. I called the locksmith back from the landline inside (yep, those still exist). I wasn’t available to meet him when he wanted to meet me, so I volunteered to bring him the keypad lock, some other knobs that needed to be installed and keyed, a key to our house, and instructions on what we needed done. Because, sorry, ailing kids trumps locksmith ESPECIALLY WHEN YOU DIDN’T SHOW UP WHEN YOU WERE SUPPOSED TO.
Anyway.

All this and we returned home by 10:30 a.m., where the kids settled in for some episodes of Super Mario Bros. before lunch.

Turns out, despite Cate’s complaints of a sore throat and congested head, Ben is actually the one with strep. Yep, excessive peeing is a symptom, and I knew that, but I was in denial. I had high hopes that his tonsillectomy would drastically cut down on the strep diagnosis for him. Oh, and that’s poison ivy between his toes. And Cate just has a virus.

They kids pestered each other so much and interrupted me with their tattle-telling while I was trying to talk the pharmacist that I sent them to their rooms when we got home. They both promptly fell asleep – y’all it was almost spooky because these two just don’t nap these days – and I contemplated the bacon-wrapped, cheese infused hot dogs we’re going to eat for dinner. Then it’s family movie night with “Wild Hearts Can’t Be Broken,” kettle corn, and Reese’s Pieces.

Because Happy Friday to me.

And, really, Friday, stop acting like Monday. You have some hours left to redeem yourself.