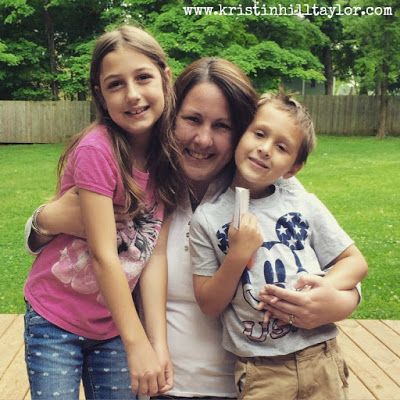 But let’s back up a little. Here’s a list of what’s happened in our life since April 22:

Greg opened an office in Hazel. We sold our lake house. We celebrated three birthdays with two parties and then Mother’s Day. Ben has his tonsils and adenoids removed. We have another lake house under contract. We met a birth mom and began the adoption process, including the home study documentation. We’ve had fundraisers for our Guatemala mission trip. Cate had strep throat. Greg moved his main office in Murray.

That doesn’t even include normal school stuff, soccer practices and games, church commitments, and hanging out with friends.

So, here I go, talking about adoption, school, TV, celebrations, household chores, and my new favorite drink before May totally escapes me.

Obviously, these things come to you in no particular order …

1. “One Tree Hill’ is a good show. I needed a new show to watch as I fold laundry and walk on the treadmill. This one is working for me. {Here’s looking at you, fans of “Gilmore Girls,” “Hart of Dixie,” “Dawson’s Creek,” “Felicity” … if you’re behind the times like me! But it doesn’t top the crew from Capside or Stars Hollow.}

And, hello, I love the theme song! I’m at the beginning of season three right now, and there’s been a lot of good music. Oh, and Greg watches it with me now too.

But, seriously, these kids and their problems aren’t in high school. No way.

3. Having an online book club where we discussed a chapter a week forced me to slow down and really soak in the message. And “You’re Loved No Matter What: Freeing Your Heart from the Need to Be Perfect” by Holley Gerth was one my soul needed.

3. People really do celebrate Cinco de Mayo. Four friends and I went I celebrate my birthday a couple days late at a local Mexican restaurant we all love. We couldn’t figure out why it was crowded on a Tuesday night. And then we realized we’d missed the memo on the holiday. We’re cool like that.

4. People like free. In four days at the beginning of May, I offered my ebook for free. I’m so grateful for the hundreds (!!!) of people who downloaded it. {Hey, if you were one of the 1,682 people (!!!) who downloaded “Peace in the Process,” I’d really love for you to leave a review once you’ve finished reading.}

5. We’re buying a lake house. We’d been looking since before we closed in April on the sale of our other one that we really didn’t even want to sell but needed to because of circumstances beyond our control. But we found another one that we may end up loving more. The property is amazing. And we have plans to make the house even better.

6. I have a third-grader and kindergartner. Okay, well, I didn’t just learn this. But this just happened. I mean, it will happen in August. Which counts as now. BECAUSE SCHOOL’S OUT … FOR THE … SUMMER! In fact, I wrote about my Summer Not-To-Do List at Circles of Faith this week.

7. We’re adopting a baby due in September! Yeah, I know, I just said I was sending my youngest to kindergarten. God’s timing is funny … and perfect. {And I’ve already written a whole post about this, in case you missed it.}

And, just for fun, you should know I initially connected with the birth mom and learned the lake house owner accepted our offer on the same day, which happened to be Cinco de Mayo. No wonder people celebrate it …

8. Crystal Light makes a grape-flavored drink that reminds me of grape Kool-Aid. I lived off grape Kool-Aid when I was a kid. I was so excited when my friend Julie offered me this as a drink of choice at her house. She gave me a packet to take home and the item was immediately added to my grocery list.

9. Sorting dirty clothes by people before washing them is more effective than sorting them by color. I realize some of you just cringed. But, seriously, this is making my life easier. Each person has a bin in the laundry room, and then when it’s full, I wash that person’s clothes. It cuts out the sorting as I’m folding them and the rooting through baskets looking for something.

So, how was your May?