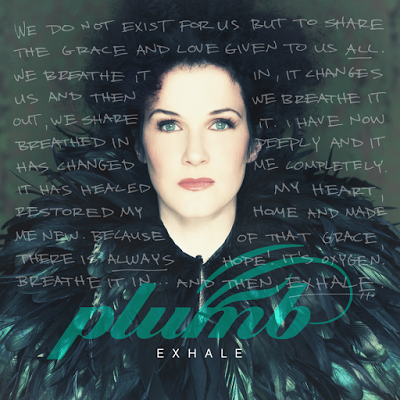 Plumb’s new album is about being breathing in God in a new way that happens with restoration.

But the message doesn’t stop with how we’re changed on the inside. The music encourages those who have been restored – which, really, can be any of us – to exhale and share our stories of redemption. In doing so, God is made know, despite our weaknesses.

“Exhale” is perfectly titled because as long as we have lungs we should be breathing in and out the hope only God gives. And that’s worship.

I love reading acknowledgements and thank yous in book and albums. Honestly, I don’t have many CDs, so one of the first things I did when “Exhale” arrived in the mail was read the lyrics and notes.

And I’m glad did.

Listen to what Plumb writes: “I have spent most of my life, much less my career, living for me. I believe in natural consequences, so, naturally, I crashed and burned in just about every way. In that place, I learned that I don’t exist for me but for the one who created me, died for me, forgave me and made me new. Jesus, you not only forgave me for my selfishness, and healed me and restored my home … you gave me a second change to use the gift you’ve given me to honor and glorify you with it, that others may know your hope.”

That’s what restoration is about.

Plumb sings about that in every song. Just look at the titles: Exhale. Lord I’m Ready Now. Resurrection. Great is Our God. Broken Places. Faithful. Restored.

I really love “When You Walk Into the Room.” It’s a song that cries out to God, knowing he brings light to any darkness. “Faithful” is anthem to cast out fear of isolation. So many songs proclaim the character of God – worthy of praise, true love, strong, faithful, our champion, healer, and protector.

I do too. And that what kept coming to mind while I listened to these 12 songs.

_____________________
ABOUT PLUMB :: Tiffany Arbuckle Lee, better-known by her stage name Plumb, is a songwriter, recording artist, performer and author. Plumb has sold more than 500,000 albums and over two million singles worldwide, co-penned songs for numerous other artists, including Michelle Branch, Mandisa, Mandy Moore, Jaci Velasquez, and Natalie Grant, and had music placed in many films and television shows. Originally signed as a Christian Contemporary Music recording artist in 1997, Plumb is now known as well as or better in alternative rock, electronic dance music, and for the use of her music in film and television than she is in the CCM market.

ABOUT THE ALBUM :: “Exhale,” the seventh studio album from Plumb, expresses a new focus and vision. After the runaway success of “Need You Now,” which coincided with her own moving story of brokenness and ultimately healing, Exhale brims with worshipful songs of gratitude and hope.

The defining concept of “Exhale” was born from a sermon at Plumb’s home church, where her pastor Pete Wilson expressed the notion that the church doesn’t exist for itself. Rather, believers come to church to breathe in grace and truth, be changed, and then go out and “exhale” that hope into their surrounding community.

“That idea of exhaling hope hit me right away and I couldn’t get to the Notes section on my phone fast enough. I started writing the chorus of ‘Exhale’ right then and there,” Plumb said. “I have been made new by the ultimate hope, and I want to share and exhale that hope in every way I can.”

GIVEAWAY :: And I have a copy of this CD to give one of you! The giveaway is open to U.S. and Canadian residents. Just use the Rafflecopter widget below. A winner will be randomly selected on May 14.

_____________________
Many thanks to FlyBy Promotions/Propeller Consulting LLC for providing me with a copy of this CD in exchange for this post as well as the one for the giveaway. The opinions expressed here are my own. If you have won a prize from FlyBy/Propeller in the last 30 days or have won the same prize on another blog, you are not eligible to win.