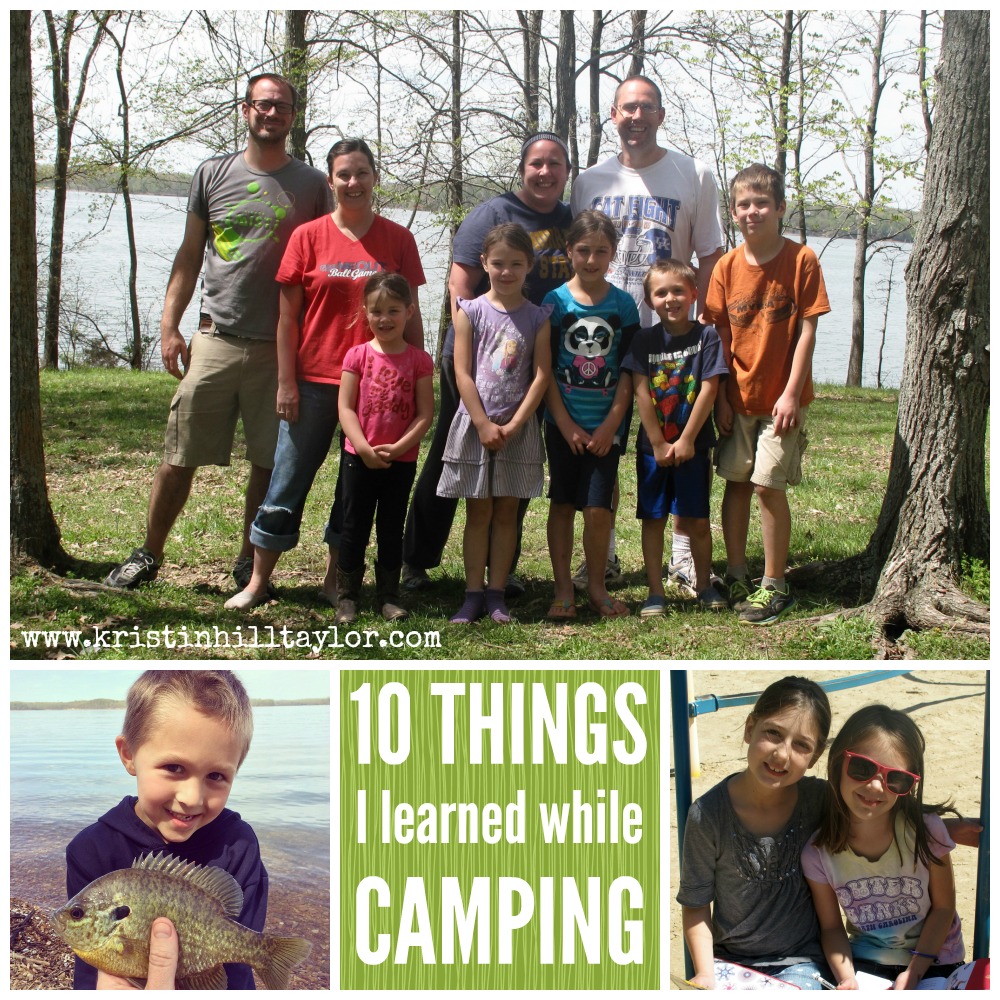 We went camping with our best friends the second weekend of Spring Break. It’s funny, really, because I used to say I didn’t like to camp and now I’m finding myself thinking about when we’re going again. {See Facebook conversation for more thoughts on my preparations and opinions of camping.} But before next time happens, I want to document this time … with a list, of course!

1. I don’t like mice, but tent camping is okay. Yes, they’re related.

The plan was for Jaclyn and I to sleep in the RV bed while our three girls slept on the sofa bed in the RV and our husbands and boys slept in tents. And then Friday evening I saw a mouse run beside the bed.

We’d seen evidence of a mouse – mice? – but I was choosing to be in denial it – they? – were still in the RV with us. But then I couldn’t un-see the mouse.

2. Having a massage appointment scheduled the day after arriving home from tent camping two nights is a good idea. Okay, so I didn’t plan it. But it worked out well, especially for my lower back.

Each month, I go to these massage appointments and Hannah the masseuse asks me if anything new is bothering me. I usually say, “No. Same tight neck and shoulders.”

But on this particular Monday my response was different: “Yeah, my lower back is killing me. I tent camped two nights.” She’d seen the tent camping part of the story on Facebook, so I’m guessing she wasn’t surprised. Apparently that air mattress – whether deflated or not – messed up my back and requires a follow-up appointment.

And here I was excited my sometimes nagging shoulder wasn’t bothering me after sleeping on the ground.

3. A Kindle makes for good nighttime reading – and doubles as a flashlight.

Well, yes, there was daytime reading too.

I finished reading “Nobody’s Cuter than You: A Memoir About the Beauty of Friendship” by Melanie Shankle, read “Footsteps” by Diann Mills and “Target” by Lisa Phillips, and started “Bait” also by Phillips. The two Lisa Phillips’ books are part of a fictional suspense series that had a little romance too.

4. Parenting one almost 8-year-old girl who is a people-pleasing rule-follower is a like a vacation. But I missed my 5-year-old second-born who likes to push every boundary and requires a constant, watchful eye, especially near the lake.

{Yes, this is part of how I did so much reading. See #9 for another reason.}

Ben was with Gran-Gran – aka The Best Mother-in-Law Ever – the first night of camping because he had been diagnosed with strep throat {yes, again … fifth time since Dec. 26} earlier that same day. The diagnosis came the day after we had been at the ENT scheduling his tonsillectomy for April 28. So he needed to be on an antibiotic until he hung out with other kids.

Gran-Gran and Ben had a splendid time that apparently involved flying a kite, eating ice cream, and watching a movie. Then she brought him out to our campsite by lunch time Saturday so he didn’t miss out on the camping fun.

5. I can text really long messages. And 25 years of friendship can happen across the miles.

Camping came on the heels of a Spring Break that gave me time to overanalyze and internalize too much. That led me wanting to chat and laugh and cry with Katie, whom I’d thankfully gotten to spend some time with the previous weekend when we were in Louisville. We had played phone tag and exchanged some texts, but we both apparently finally had time to converse Friday night. I didn’t have a strong or consistent-enough cell signal to talk to her, but texts were going through.

So that’s what we did. Sometimes that’s how life happens.

6. Bacon, sausage, pancakes, kabobs, burgers, and red potatoes are especially good cooked on the fire. And the husbands like to cook. Perhaps I should set up a campfire in the back yard. Enough said.

7. You can get sunburned in April. And, obviously, we didn’t think to pack sunscreen.

8. Camping requires so much preparation, but it’s like a retreat once I’m out there. I used to think I didn’t like to camp. And until Friday I thought I didn’t tent camp. I’m glad I’ve accepted that I like to camp and I’m becoming better with the preparations.

9. Kids belong outdoors. Well, okay, maybe not forever and always, but when they’re out there, they play and then sleep so well. This past weekend, they played tag and washers, fished, read, talked with their friends and other campers, and explored.

10. Having family friends really is the best. Yes, I got to spend the weekend with Jaclyn and most of Saturday with Sarah, but my kids and husbands got to hang out with some of their best friends too. Turns out camping is a fabulous way to make memories together.

Your turn! Tell me about your camping experiences.