Since Christmas, I’ve left the house five times – a trip to the pediatrician and pharmacy, an overdue grocery shopping errand, another visit to the pediatrician, a dinner date with a friend who knew I was on the verge of cabin fever, and a date to the movie theater with my girl to see “Annie.” {By the way, Cate and I loved the remake. I think I’ll go find the soundtrack now …}

This wasn’t how I expected to end one year or start another. But I have found myself remembering all that God has done.

I’m not complaining, because, despite my son’s fever and cough, it’s been a good week at home. The time being more unscheduled than I expected makes me feel freer. Sure, I’ve had to run the dishwasher a few times and am slowly working on all that laundry.

But I’ve finished scrapbooking 2012 and our trip to Disney earlier this year. I’ve finished reading “The Fringe Hours: Secrets to Making Time for You” by Jessica Turner. {You’ll hear more about this book here on the blog, but you can preorder it here. Any woman can benefit from its practical, encouraging words.} 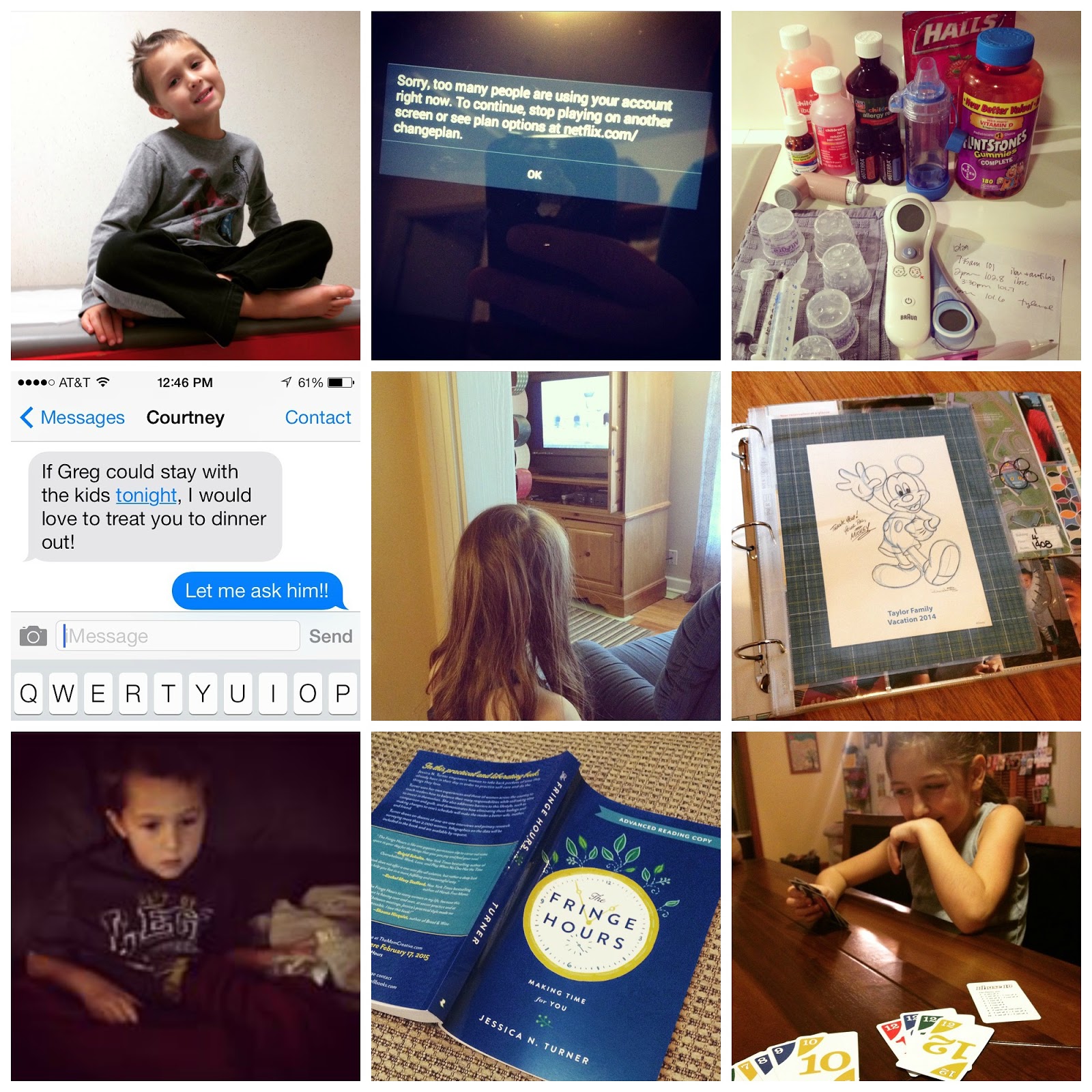 Ben started running a fever late Christmas night. I made an appointment to see the pediatrician the next morning because I figured he picked up something from the cousins. It often happens after family gatherings.

Turns out he had strep throat. For a while, it was his go-to illness. But it’s been awhile. And his throat didn’t actually hurt. Armed with an antibiotic, we returned home and figured we had a couple days in the house.

When he was still running a fever on Monday morning, I called the pediatrician’s office again. Usually with strep, his fever is gone after 48 hours after starting the antibiotic. I was fine waiting longer, but it seemed strange that the thermometer was still reading 102. So back in we went.

This time he tested positive for flu. Those germs were probably there Friday too, but it may have been too early to show up on the test. The nurse said she had seen much strep and flu together recently. Ah, winter …

Admittedly, I wanted to cry when our favorite nurse practitioner delivered the news. And not just for Ben. But for our December.

You may remember Cate ran a fever for various reasons – walking pneumonia and then a virus – for 13 of the first 20 days of December. She missed half the days of school between Thanksgiving and Christmas. We cancelled plans and rearranged life.

All of that is fine and part of real life, but that’s been our whole December. Plus, as a momma, it gets old seeing your kids puny. And, yes, I miss my friends. I’ve seen them so much less than usual this month.

Nobody was sick the week of Christmas – praise God! – and Cate finally seems herself again. I’ve done my best to keep Ben’s flu germs contained to limited areas of the house, but there’s only so much control possible there. Ben’s temperature has been hovering around 99 and he’s perked up so much that he was pestering his sister and disobeying his parents yesterday. Either way, he’s hardly worn a shirt this week, which has in fact cut down on the amount of laundry.

We didn’t exactly ring in the new year either. Ben was in bed by 7 p.m. Cate, Greg and I played Phase 10 – well, the first five phases – until her bedtime and then us party-animal adults watched the most recent episode of “Hart of Dixie” so we could be caught up when it starts airing again next week. And we were asleep well before 2015 officially began.

This is life. And it’s often not what we expect. But there’s been beauty and rest this week anyway.

Happy new year, friends. May 2015 be full of your favorite people gathered close and unexpected beauty – and very few fevers. At least that’s what I’m hoping for mine.