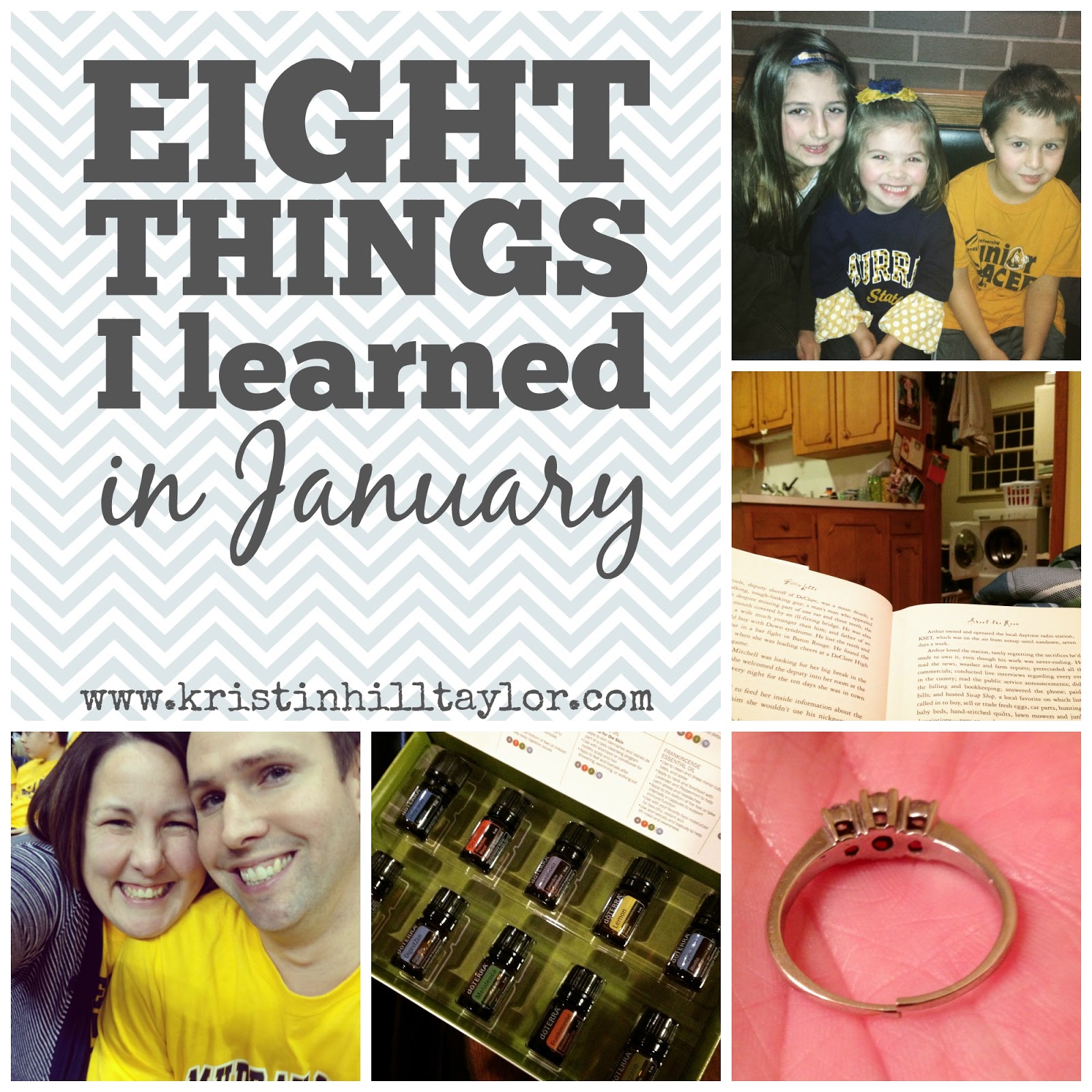 January and I have a history of big moments, although this time our relationship was fairly normal. We didn’t even get any snow. After a sickly December, my kids have mostly been well. They did have a simultaneous bout of strep throat earlier this month.

Without further ado, here are eight things I learned in this month …

1. I like essential oils. There. I said it. Admittedly, I’m just beginning so I have a lot to learn. But I’m surprised myself when I ordered a kit this month and have another ordered scheduled to arrive soon. (More on this coming soon in its own post!)

2. My marriage is stronger than my engagement ring, which broke. The thin, worn band has been resized more than once. I’ve worn it for 13 years and am thankful in that time Greg and I have grown, individually and together. My ring may be worse for wear but my marriage is going strong. (And the ring is getting an upgrade so I don’t hurt pinch my finger in it, again.)

3. Fiction is good for my soul. I tend to read more non-fiction than fiction. That’s all good for my brain. But I take everything so personally that all the applying philosophies and advice to life can be exhausting. I’ve read two fiction books this month and am looking forward to diving into others already on my Kindle.

(I read “Shoot the Moon” by Billie Letts and “Orphan Train” by Christina Baker Kline. I accept any recommendations.)

4. I like to plan but spontaneous adventures are refreshing too. (Read the latest one here.)

5. People like a deal. I guess I already knew this, but I sold several copies of my ebook this month with a sales promotion because, despite its drearyness, January is worth celebrating.

6. God doesn’t care about my resume. Public speaking isn’t my strength and I don’t have a list of such experiences. Even so, I’ve been invited to speak at two events this year. Both involve telling our adoption story. So, if I’m going to speak in front of an audience, of any size, I’m glad it’s about my favorite story.

And I even ordered postcards designed by the talented Lisa Larson so I could promote my ebook at these events.

7. I’m going to Guatemala for a week in July with my husband and my daughter, who will be 8 then. We’re joining a local group led by some neighbors up the street, literally, who work with Bethel Ministries to build a house and distribute wheelchairs, clothing, and food. I’m sure you will hear plenty more about this.

8. I prefer TV shows to end their series when they’re still on top. Like “Parenthood.” I love it. There are so many real-life parallels. I feel like the characters are my friends. But ending on a high note, ratings wise, is better than dragging on. Like “Grey’s Anatomy” did.

So. How was your January? What did you learn?

We had a great visit with these cousins. In a summ