The same year Ben was born our small group from church started a tradition. I’m not sure we knew it was going to be a tradition, but this group – equal parts kids and adults – gathered around a table for a Thanksgiving meal.

That was 2009. And, actually, Greg and I didn’t get to go because Ben was born that Monday afternoon. We brought him home that Tuesday afternoon, just hours before they had our first Thanksgiving. Not only did we not go, but my friend Sarah – who had a boy just shy of a month old – made the green bean casserole I was supposed to bring. And then our friends brought us plates overflowing with delicious food. We weren’t at the actual table with them that first year, but we were with them and they were with us.

Four years later, we still gathered around the table for a Thanksgiving meal – and that time I broke out my china plates for the first time. For 11 years and 3 months, that china has been sitting around, supposedly waiting for a “special occasion.” Truth be told, I was persuaded to register for the china and really wouldn’t regret had I not added it. But I have it. And I decided having it sit there was pointless.

We’re not technically in an official small group with these people because we scattered to build relationships with other generations in our church, but these people are our community. We’ve mourned and prayed and dreamed and hoped and planned and played and cheered and cried and laughed.

My girlfriends even washed by hand the china plates I probably would have put in the dishwasher. They’re into the ordinary details like that. They’re helpful like that. We’re in this life together like that. 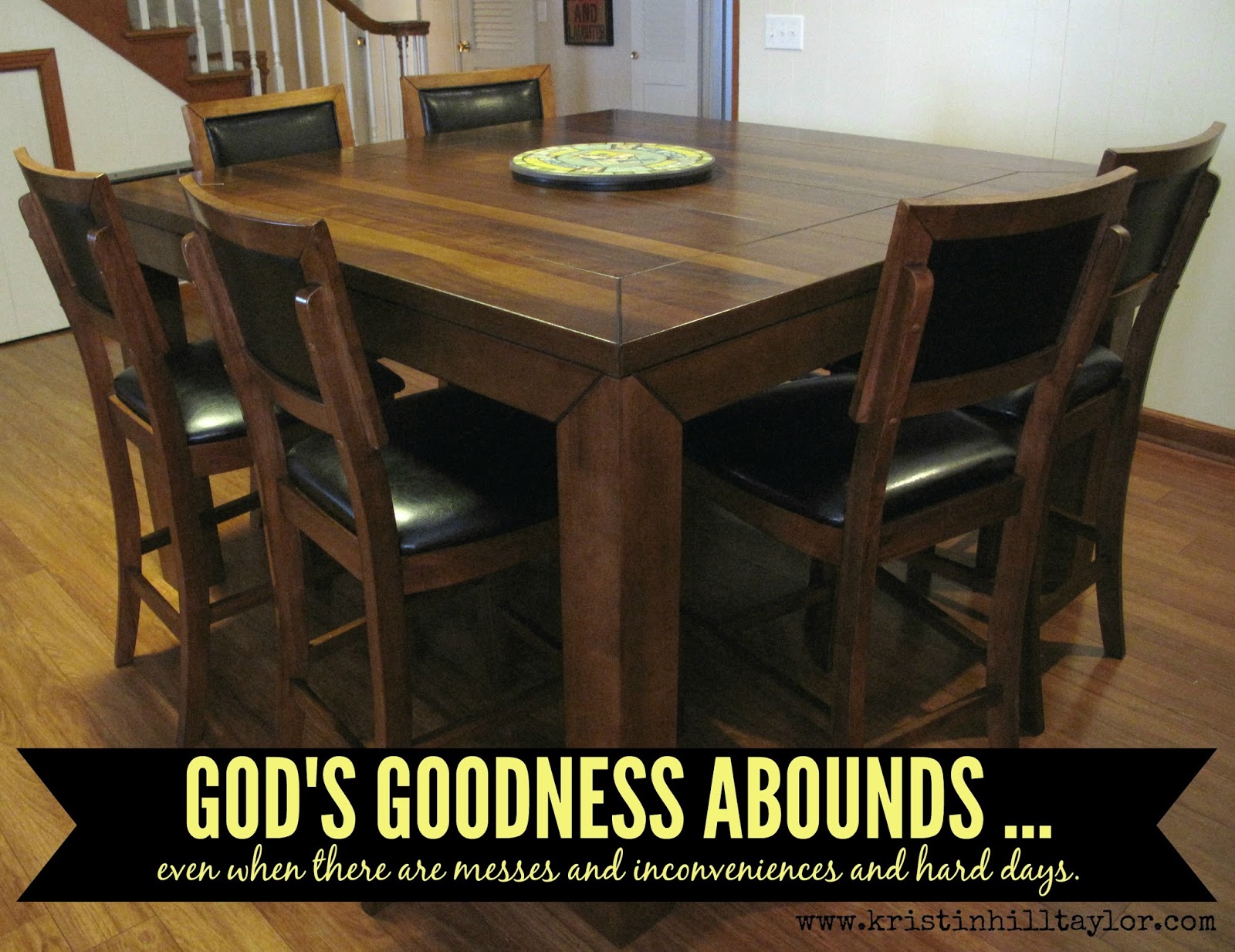 So the tradition continued this year. The Sixth Annual Thanksgiving Dinner with Friends. Seems like we could come up with a better title, but that’s all I’ve got right now.

We’ve talked about going away from the traditional turkey, stuffing, veggies, and pies meal, but our Kenyan friend Daniel really loves this American holiday. This year I had a 15-pound turkey in my freezer because it was Greg’s prize for winning a target shooting contest at our church’s annual fall party.

So I volunteered to make the turkey.

I should note: This is the first time ever I’ve attempted to cook a turkey. And I think I’ll retire from cooking any more full-sized birds. You’ll see why.

The turkey thawed in my refrigerator for days. I studied the recipe for a moist turkey from my friend Corrie. I did wonder if cooking something whose steps had to be noted on my calendar was going to be worth it.

A day before cooking, I soaked the turkey in brine. I didn’t anticipate how much I would hate lifting the turkey out of the brine. Usually raw meat doesn’t bother me, but I’d never had to lift and hold an entire animal body, with bones and joints. I cringed while I dumped the brine out of the turkey’s body and moved the bird to the foil roaster pan.

I sliced up the orange, lemon, and onion to stuff inside. I cringed then too. But I was still motivated to do this well. Corrie recommended cooking the turkey breast-side down so the white meat would be moist, cooking directly in the juice. So that’s what I did. Everything was situated to go in the oven when I realized juice was leaking out of my pan and all over the stove. I ended up putting the pan on a towel in my refrigerator while I ran to Dollar General to get another pan.

Into the oven it went.

After about an hour, I checked on the turkey and spooned some of the juice over the turkey. I realized then my meat thermometer didn’t work and I somehow slit the foil pan as I was putting it back in the oven. The second pan. Another slit.

I had to leave the house to pick up Cate from school, so I put the pan on the cookie sheet and continued baking the bird. I realized as I was driving to school that the pop-when-done button that I wasn’t even relying on was slitting the pan because I was cooking the turkey breast-side down. I should have taken that button out, but I didn’t think about that, obviously.

I called and vented to Greg, who was busy at work. He tried to be encouraging: “Next time you’ll be better equipped.” Um, there’s not going to be a next time.

And then Ben said, “Momma, I heard you say a bad word about the turkey.” I asked him what that was exactly. “Stupid.” Honestly, I’m glad that’s all he heard because I’m pretty sure I muttered many other words in my head.

I texted with my vegetarian friend Sarah, who was sympathetic to the whole ordeal, and she mentioned she had cooked a turkey in a large Pyrex dish. I had one bigger than a 9×13, so I figured it was worth a try. The turkey fit – barely.

So I got a new meat thermometer from Kroger and put the turkey back in the oven {again} in a new, more secure pan. I had borrowed an electric carving knife from Jaclyn, but once that turkey was finished cooking, I was done.

Thankfully, Sarah’s husband Nathan volunteered to carve the turkey when they arrived. He also saved the gravy that I couldn’t get to thicken. I would have used the gravy packet that came with the turkey, but it somehow leaked all over my counter and under my microwave. So I went with turkey juice, flour, and milk. Clearly I didn’t know what I was doing, so Nathan and some corn starch solved the problem.

I had my turkey chaos. Greg ended his work day with a leak in his office basement. There was a weird smell in my kitchen. Jaclyn’s husband Bryan was still working when the rest of us were eating dinner. Greg had to leave for the city council meeting we had forgotten about when we picked the dinner date. Sarah and Nathan had dealt with non-functioning heat at their house earlier in the day. Kayla and Daniel seemed to have less chaos in this particular day, although their daughter was at dance class for the first part of the evening.

But we gathered around the table. I even got out the china again. Our nine kids who are 18 months to 8 years old gathered on a blanket in the living room, using paper plates. Yes, sometimes real life is chaotic, but we’re thankful anyway. God’s goodness abounds – even when there are messes and inconveniences and hard days.

Happy Thanksgiving, from our crazy table to yours.