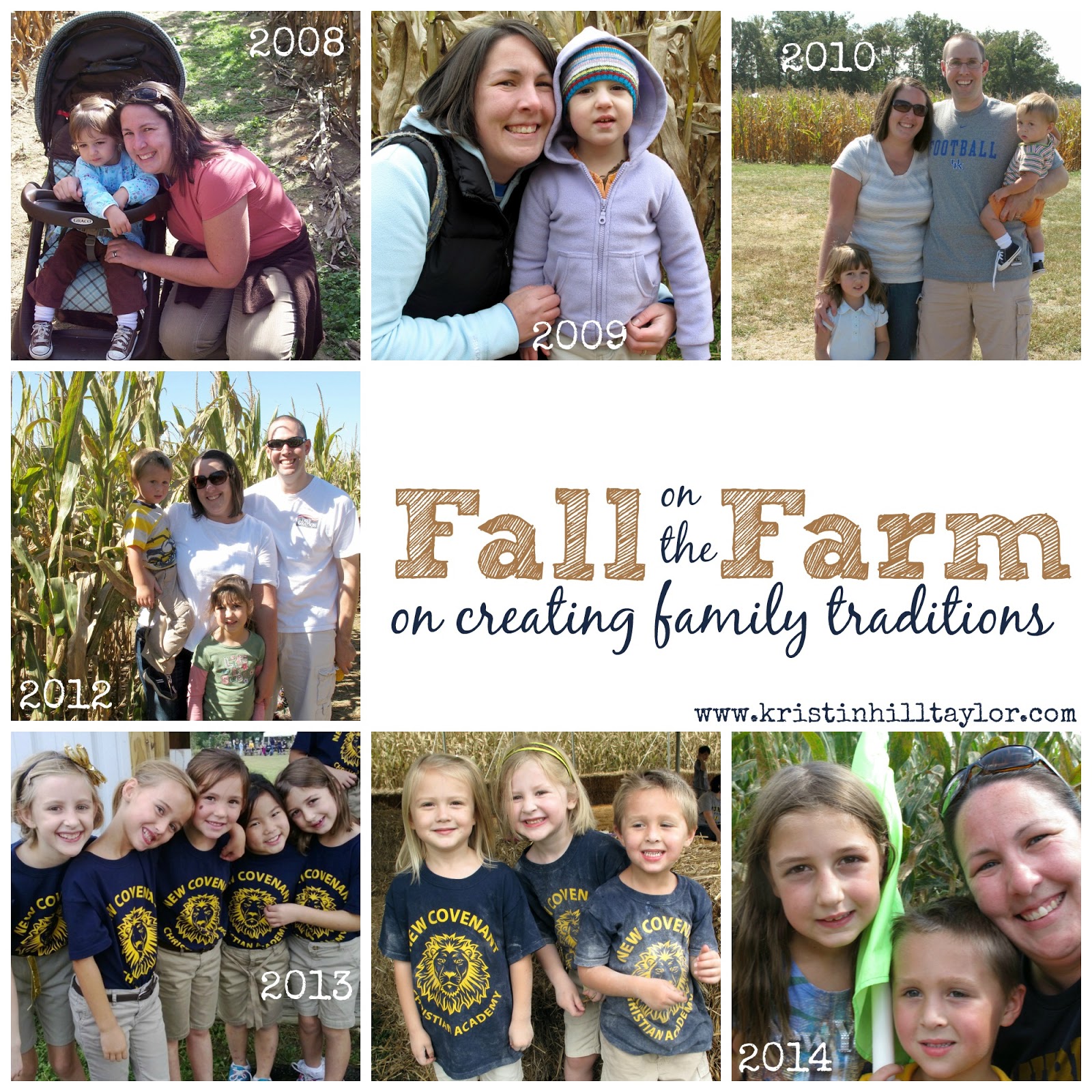 Tradition can be defined as a way of thinking, behaving, or doing something that has been used by the people in a particular group, family, etc., for a long time and the stories, beliefs, etc., that have been part of the culture of a group of people for a long time.

One of my favorite things about our family is our traditions. Some have been implemented purposefully and others have just happened based on what we like to do. Many are connected with holidays, but some emerged from daily life.

When we first went to Murray State’s Fall on the Farm in 2008, we had no idea the event would become a tradition for us. But it did – and that was before Ben was even born. The corn maze and barn slide have long been the favorite activities. And there was some disappointment this year that pony rides weren’t available.

We’ve been every year since, except for 2011, when we were busy exploring Acadia National Park, other places in Maine, and Boston. Most years Fall on the Farm was in September, which, looking at the pictures, is usually not actually cool enough to feel like fall.

The first few times we went as a family – which is usually how we do weekends. But last year the kids went with school so I tagged along while Greg was working. Then this year Greg had an all-day commitment, but the kids and I went anyway.

I take tons of pictures. But they help me remember moments. I especially love comparing pictures from the same event over the years. Pictures really are worth so many words and tell stories I know I would otherwise forget.

When I look at pictures from all the years, I can see how our family has grown and changed. We have made many changes throughout the years – from adding more children to shopping online for so many things, including new glasses, to moving and making lifestyle changes. I can remember the memories we created together and the experiences we have shared. It makes me smile to remember the past and get excited about what the future holds.

For us, the fall seems filled with traditions. There are football games and the annual church party and bonfire. We like to vacation in September or October, so I find myself remember trips to Chicago, Branson {2008. 2010. 2011. 2013.}, and the Northeast. Ben’s birthday is near Thanksgiving, so there is plenty of celebrating God’s goodness in our lives.

I hear it’s going to cool down around here. We have soccer games on the calendar through the beginning of November. We’re going to experiment with a possible new tradition – camping – in November.

But, first, we’re going to surprise the kids with one of those vacations we love. This one is to “that big castle before the movies,” as Cate refers to Disney World. Honestly, I can’t believe Greg and I have kept this a secret this long from them. We’re notorious for letting our excitement spoil surprises and prompt early gift-giving.

I’ve seen some people talking about Christmas. But I’m not ready to go there. Fall is just arriving and we have some traditions to uphold before the official holidays.

Does your family have any fall traditions?