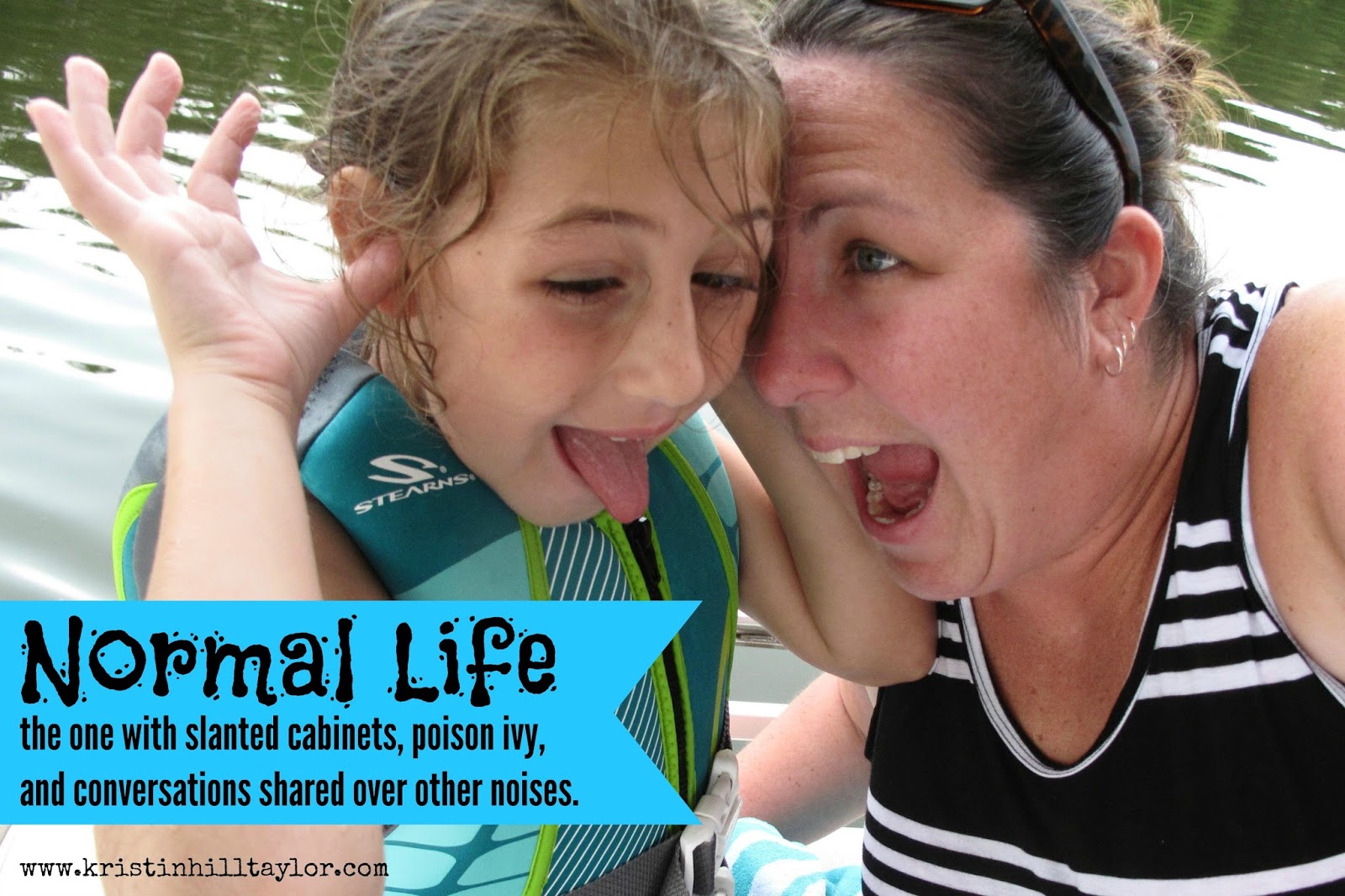 Standing in our lake house kitchen last weekend, I was talking to my friends Katie and Aaron when I noticed one set of cabinets was coming apart from the others, creating a gap where there wasn’t a gap earlier in the week. We kept talking, catching up because we don’t see each other more than once or maybe twice a year.

And then I wondered if the cabinets were going to fall. Such a thought interrupted a good conversation.

Greg and Aaron came back to our house that evening and retrieved some tools. They ended up securing the cabinets enough that we didn’t have to worry if they were going to fall on one of the five children 4 ½ years and younger who ran through the kitchen countless times as us adults continued catching up. Then Greg called his professional handyman Monday morning.

Slanted cabinets aren’t a big deal, but they require attention that we hadn’t planned on giving them.
And such as been my week.

Cate’s adenoidectomy – that’s a fancy word for a surgery to remove her adenoids – has been on the calendar for Wednesday morning for a month. So, of course, I wasn’t surprised when Ben woke up with a splotchy, red, swollen face Tuesday morning.

Thankfully, we only live three blocks from the local Medical Arts Building that’s attached to the hospital because I was there first thing Tuesday morning to sign some papers for Cate’s procedure 24 hours later and then went back about an hour later so Ben could get an oral steroid prescription to dry up his poison ivy that was nearing his right eye. And, yes, he had it on one other body part I probably shouldn’t discuss on a public blog.

His favorite nurses tried to teach him about poison ivy. “Leaves of three, let them be,” they said. They demonstrated with their fingers what poison ivy looks like. I showed him pictures on my phone. He listened and later repeated his own version: “Leave of three, don’t touch ‘em!”

Of course, this is his second bout of poison ivy in the latter part of summer. And, no, I’m not surprised. He’s a boy who loves the outdoors – and is officially allergic to trees, weeds, and grass already. He takes allergy shots for those and apparently the occasional oral steroid for those leaves of three.

At least this time the steroid didn’t make him nuts, although I do think it’s interrupted his sleep. The nights run together, but I’ve lost count of how many nights he’s come into our bedroom while it’s still dark out because his nose was bleeding, he was restless, he wanted to check to see if Daddy had left for work yet, he wet the bed, or he thought it was an acceptable hour to start the day.

I don’t wish surgery of any kind on anyone ever, but the ENT removed “a big mess of adenoids” and in doing so she should be able to breathe better and be congested less. So that’s good news.

She was anxious going in, but she was brave. She came out of the anesthesia well. Even with a still-scratchy voice when the nurse wheeled her bed back to the room where we waited, Cate wanted to tell the nurse how she was going to eat chocolate pudding her friends Noah and Emma brought her.

We were home from the hospital by 9:30 a.m., so my girl and I spent the rest of the entire day at home. That part was especially glorious – right up there with the goodness that was the cinnamon roll Greg brought me for breakfast once Cate was back for surgery.

She would tell you the silver lining of surgery involves treats and presents from friends. We’re dearly loved, that’s for sure. Plus Cate is well stocked in coloring supplies, new reading material, and treats. The texts, visits, and Facebook were more than social noise; they were reminders of community.

Her recovery is going well. Her throat is a little sore, but she returned to school the next day with only limitations at recess and gym class so none of her classmates would accidentally hit her sore throat and slow her recovery.

I’m grateful for health insurance because we’ve milked our plan for more procedures and appointments that would have seemed possible or necessary when this year started. I’m grateful to end the week with an Cracker Barrel breakfast with college friends this morning while the kids were in school. I’m grateful the no two days are ever the same.

Of course, not long after I published this post, I took Ben to get his twice-weekly allergy shots and when the nurse hoisted him up the table, she and I both noticed new patches of poison ivy on his ears, neck, arms, and legs. So much allergy shots. How about a steroid shot instead? Yep.

And, yes, I’m grateful for normal life. Of course, by normal life I mean the one with sometimes slanted cabinets, conversations shared over all the other noises in life, and poison ivy that approaches a boy’s eye.