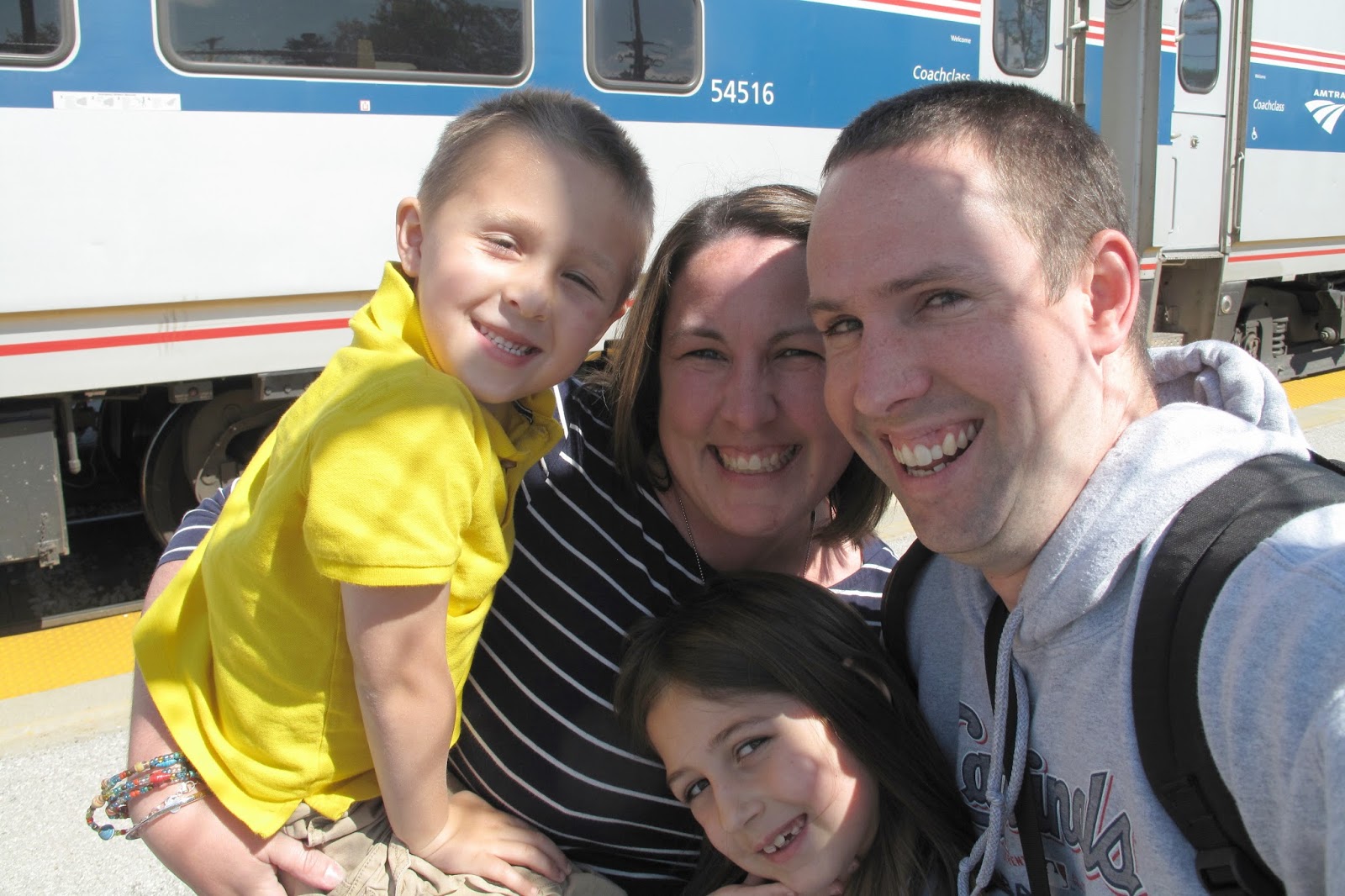 It’s birthday season for three-fourths of the people our house. So we decided to set out on an adventure.

By train. All aboard!

We boarded a train Friday afternoon in Carbondale, Ill., and arrived in Chicago about six hours later. Schedule says it’s a 5 1/2 trip, but we were delayed a couple times to let other trains clear the tracks.

I highly recommend taking the train to Chicago because, really, who wants to navigate and be responsible for driving in that crazy, big-city traffic? {Yes, I realize I sound older than my 35 years.} Plus, we knew we wouldn’t need a vehicle once we arrived in the Windy City.

It’s a comfortable way to travel. The seats are like airplane seats. There are two together on each side with an aisle wider than that on a plane in between them. There’s also more leg room than on a plane. We were able to move around to the bathroom or the cafe car. And you know kids always think it’s fun not to be buckled in.

Here are other details to consider: Our kids are 7 and 4. It cost our family of four $249 to travel round trip. Now, we also had a two-hour, one-way car ride between home and the train station. {Murray folks, you can also get on in Fulton, which is about an hour from home, but you’ll be in the train much longer.}

Just for a theoretical perspective, after buying gas for the 418 miles from Murray to Chicago, we would have still had to pay $55/night to park our vehicle had we not taken the train. Makes the train seem even more affordable!

Once we arrived in Chicago, we took a taxi to our hotel from Union Station that first night and again when it was time to head home on Monday afternoon. We had three suitcases, six small bags/backpacks, and two kids so a taxi worked out well.

Throughout our 2 1/2 days exploring Chicago we also traveled by foot, subway/rail, double decker tour bus, and city bus. Navigating those route was smooth, thanks to the way Google maps incorporates public transportation into it’s directions. The kids traveled free on the subway/rail, tour bus, and city bus, making them even more affordable ways to see the sights. Somewhat surprisingly, people in Chicago were really friendly and helpful, even on the day all four of us were decked out in Cardinals shirts.

Really, I don’t have any complaints about the adventure. Yes, Ben was tired after staying up later than usual and walking farther than usual. But his break down in the Wrigley Field bleachers was such a small blip on the weekend’s radar. He did get a little restless on the train, but if you’ve met him you realize that’s his personality. He {and the rest of us} enjoyed the rail trip.

I do have a few specific recommendations should you want to travel by train to Chicago:

1. Pack dinner and substantial snacks. The dinner options aren’t good and are extremely overpriced. I took fruit snacks, crackers, Capri Suns, nuts, and gum, but we stocked up before we headed home. We got Subway sandwiches, chips, candy, and drinks to go along with our remains of fruit snacks.

2. Bring the lap top. We brought Greg’s lap top because we thought we may want to watch Netflix or Amazon Prime after the kids went to bed at night. And we did. Hello, “Justified.” But next time I want to bring mine, which is equipped to deal with all the photos I took with my real camera during the weekend. Uploading and editing photos would have been a great way to spend my time on the train ride home. I did manage to write a couple blog posts on my iPhone. Plus if we had packed a few DVDs the kids could have watched a movie and not just narrated “Frozen,” which they could hear coming from seats a few rows in front of us.

3. Give a few gifts the kids can use. Both my mother-in-law and I bought some news books and coloring books for the kids to include in their carry-on bags. They enjoyed fresh pages to pass the time.

Traveling with kids is more complicated than adult-only trips, but we’ve traveled as a family literally since Cate was a week old. {Ah, interstate adoption …} My backpack is heavier, the potty pitstops more frequent, and bedtime may come earlier, but I wouldn’t trade any of our trips. We’ve made memories on these adventures.

I anticipate we will do something like this again. I really am not sure where else we could logistically travel by train, but I’m always up for a road {or rail!} trip.

Have you ever traveled by train? If so, what tips would you add?

________
Now you can read the post about what we actually did while in Chicago.