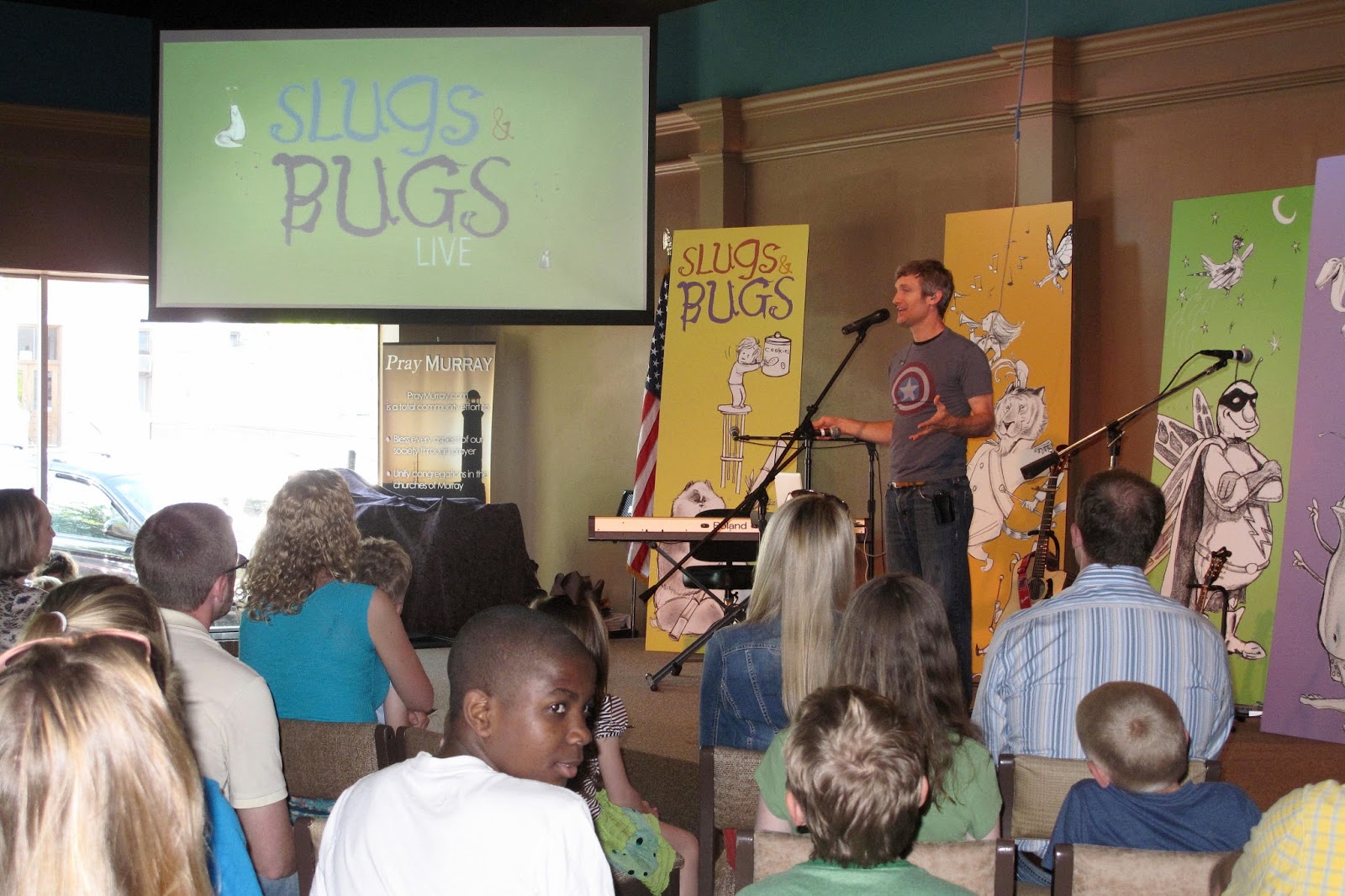 We’re Slugs & Bugs fans around here. And I’m talking children’s music more than the creatures. It’s fun, catchy and teaches kids about Jesus. Really, I’m not a fan of most kids’ music, but Slugs & Bugs CDs are the soundtrack of my kids’ lives. {Along with the “Frozen” soundtrack, of course.} Mostly because it’s not annoying and it’s quality music with a message that matters.

Even Greg sings these songs around the house, often adapting them to whatever situation is currently happening. There are four CDs, although the newest, “Sing the Bible,” is my favorite. {I reviewed that one.} But, really, you can’t go wrong with any of them.

And hearing the songs live is even better.

Randall Goodgame, the Slugs & Bugs creator, brought the live show to Murray on Sunday. It’s the third Slugs & Bugs concert I’ve organized here, plus there was a private Christmas party. {Read about the previous ones: September 2011. November 2012. December 2012.}

Once again, I was reminded why this music and coming together with other families are two of my favorites things in this season of parenting little ones.

Parenting isn’t easy. Teaching them about Jesus can be a daunting task. But together we can do this. And having some catchy songs is definitely helpful.

My favorite song is called “I’m Adopted,” a song that celebrates earthly adoptions, of which I’m obviously a fan, as well as our eternal adoption into God’s Kingdom. {Here’s more about the song from Randall Goodgame himself.} My kids know this song, and they know they’re adopted. 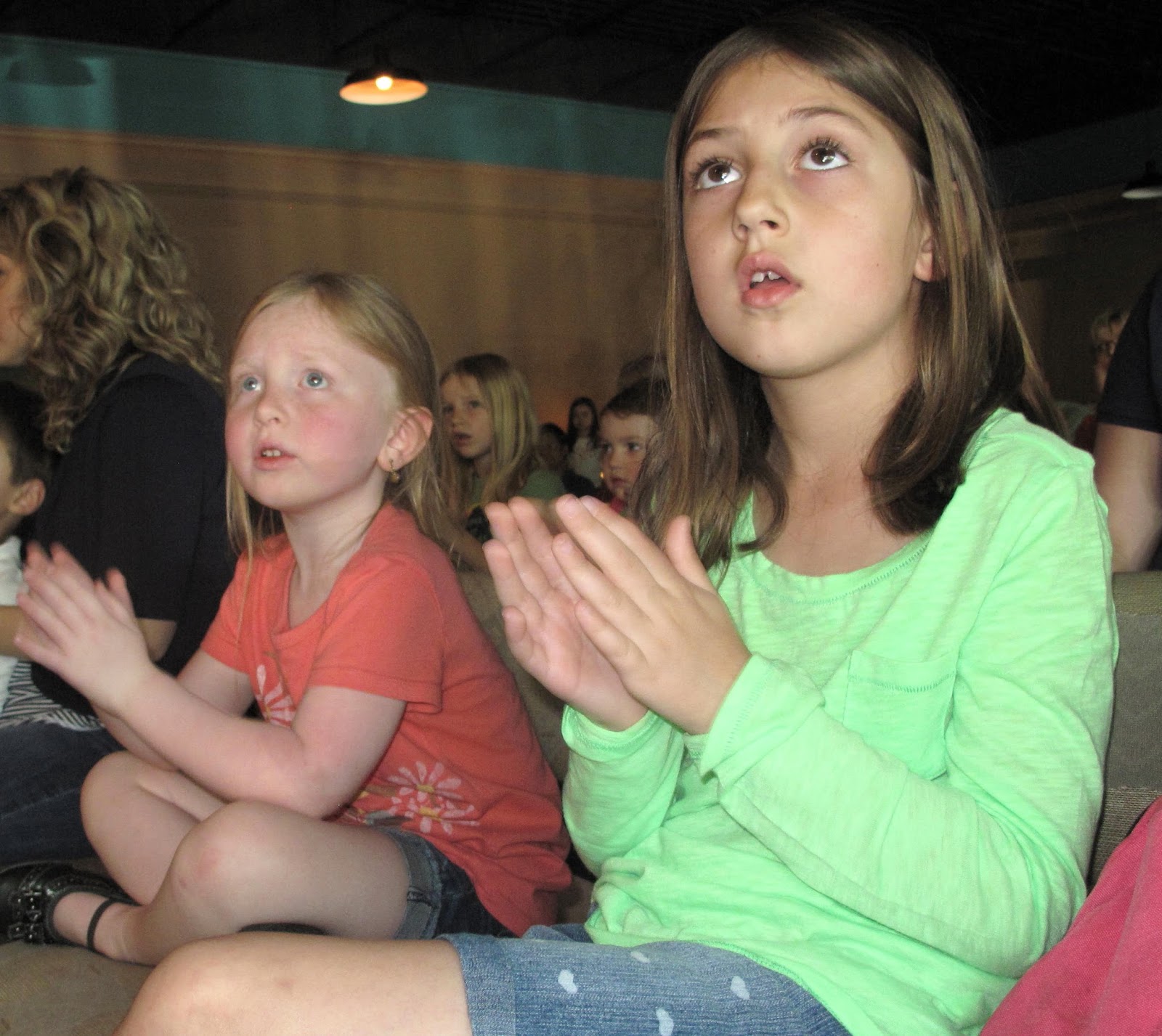 I moved around during the concert so I could take pictures and make sure little ones didn’t venture up on stage, but I happened to be near my girl Cate during “I’m Adopted.” And I’m oh-so glad I was. Otherwise I would have missed her words to her friend Violet: “I love this song. It makes me happy to be adopted.”

We talk about adoption. Cate even met her birth mom last fall. I’m writing an ebook about her adoption and her brother’s adoption because this is our story that tells of God’s faithfulness.

We celebrate adoption. And this song is part of that.

Just read the words. And then listen while watching the fun video.

I was born into a story full of twists and turns
even the scary kind, and that’s the truth
Yeah that was my beginning,
but just turn the page
And there you’ll find, in chapter two

Yeah my family loves me and I know it’s true
though someday soon, I’ll be leaving home
But there’s one who loves me
even better than my parents do
And he tells me I’ll never be alone

Once I was a stranger to my God and King
But he saw me there from his throne above
And he sought me and he bought me,
and now I sing of a brand new life and his endless love


My girl gets it. She gets her adoption is worth singing about. And she’s is starting to get that earthly love and acceptance is only a fraction of God’s love for us. He chooses us forever.

Thanks, Randall Goodgame, for making music with messages that matter. And thank for bringing that to Murray, again.

________
You can take a peek at the pictures from the concert in my Facebook album here. Learn more about Slugs & Bugs online at its website, Twitter, Facebook and YouTube. You can buy all the CDs at The Rabbit Room; the older ones are also available on Amazon.