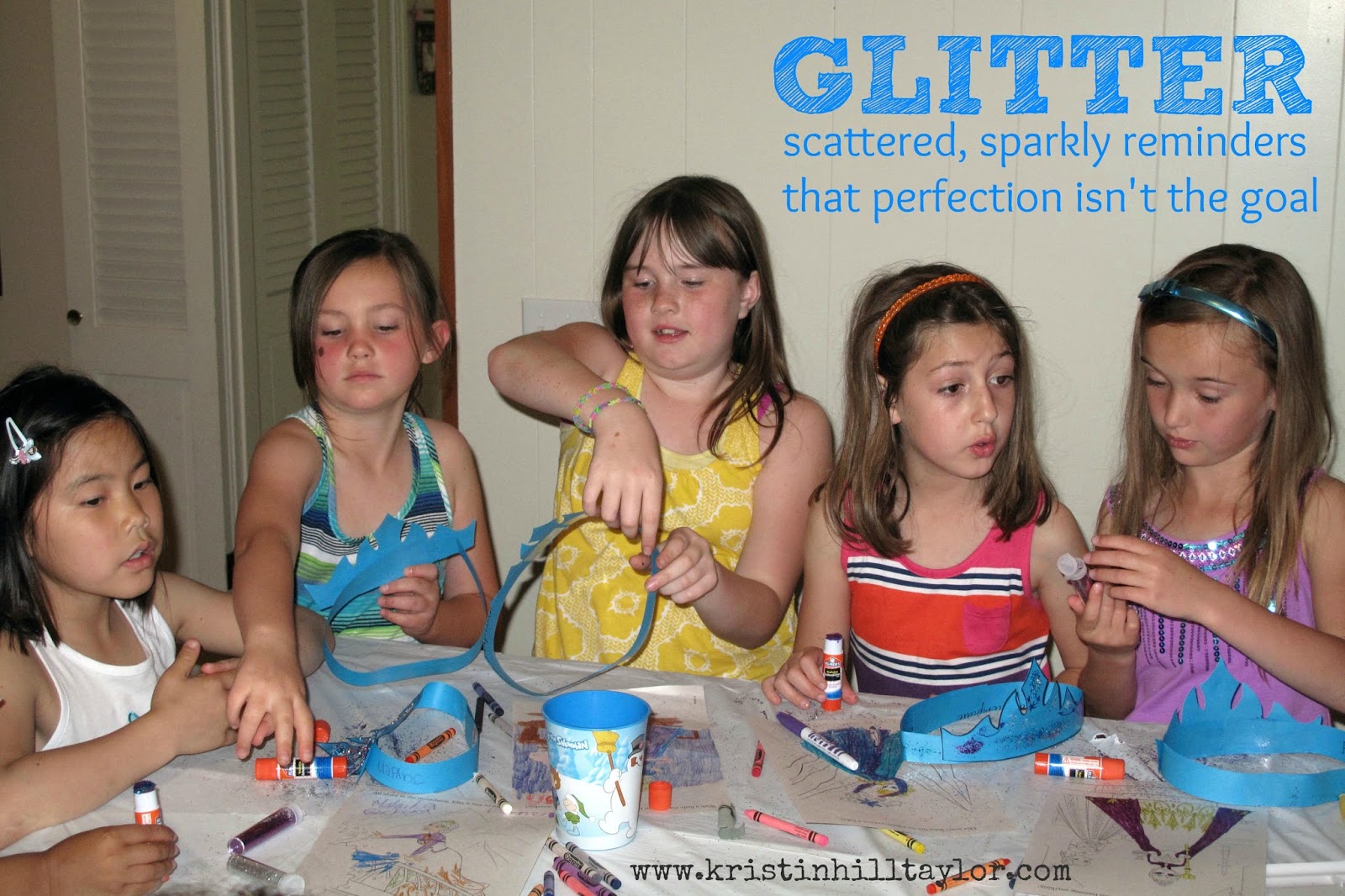 My daughter, who turned 7 last week, pretty much planned her whole birthday party. I have many control freak tendencies, but I loved sharing the party planning.

Really, I’d call all this growth. Cate seems taller basically every day. She uses bigger words and asks deeper questions. So there’s that growth. I let go. I realized I don’t have to do it all. And I asked my husband to mop the floors after the party, you know, as a Mother’s Day present. That’s growth too, people.

Cate wanted to have some girls about her age over for a “Frozen”-themed party. I know, that’s not exactly shocking. And who cares that it was 80 degrees outside on Saturday. 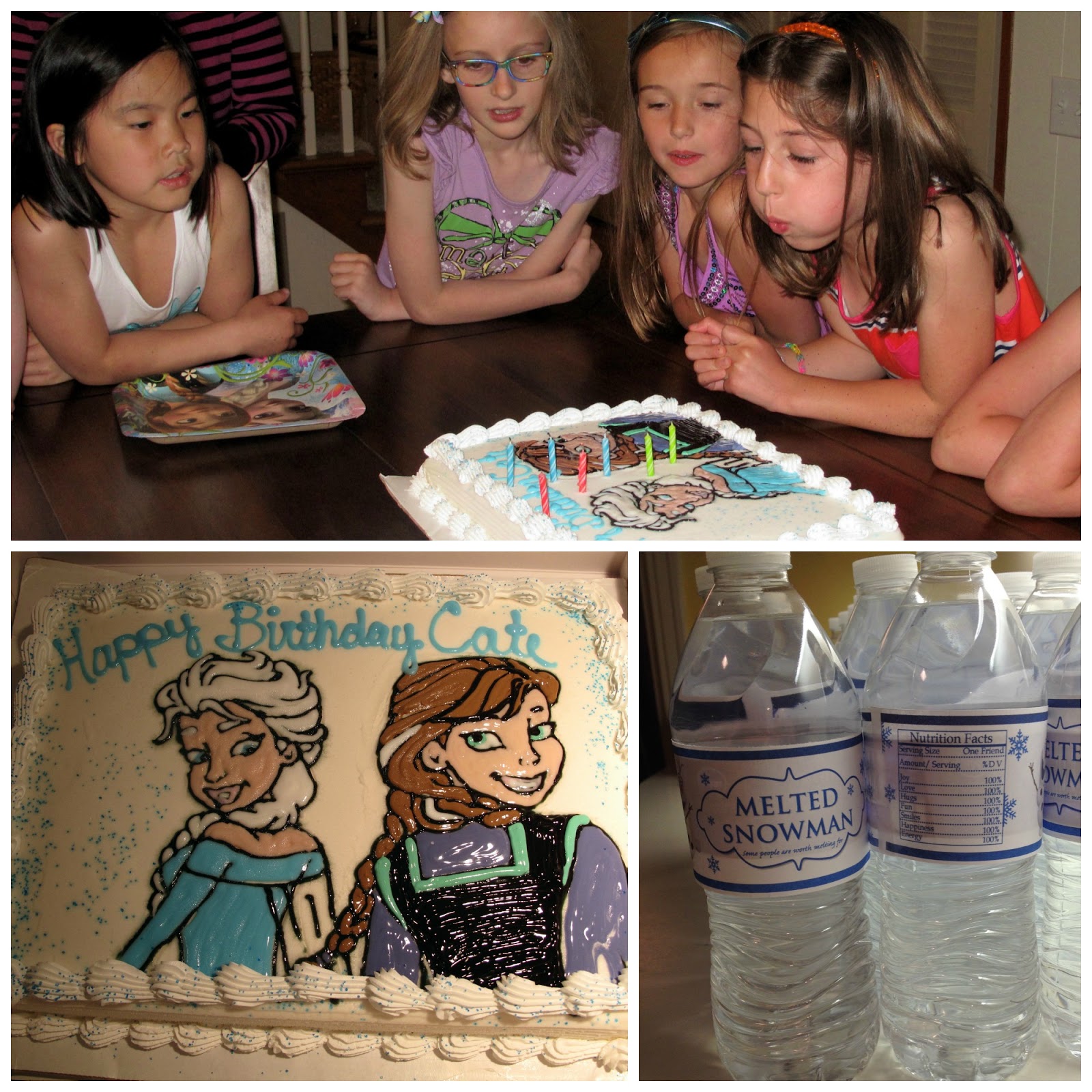 Inside we had ice cream cake, “Melted Snowman” {think about it … yes, that’s a fancy name for bottled water …}, and blue Jell-o {because, you know, it sort of looks like ice cubes}. Oh, and I got out some of those mini bags of chips in various flavors we happened to have. The cake and Jell-o were Cate’s ideas. She was immediate on board with the Melted Snowman because she recognized the joke. Thank God she got a real joke. Have I told you how I feel about first-graders and their jokes … especially when they make them up?!

Cate and I planned her birthday party during Spring Break. That’s about a month before the event, but we had fun browsing Internet. She’d been to another “Frozen” party in March. Other than informing her we weren’t making snow, I left the crafts up to her.

She chose making “ice bracelets” with clear, sparkly and blue beads strung on pipe cleaners and decorating crowns with glitter. We also tore out some pages from a “Frozen” coloring book.

Here’s the thing I love about girl parties: They’re all into whatever craft we’re doing. The coloring pages went on far longer than I ever anticipated, but who’s going to interrupt 13 girls gathered around a table coloring, talking and laughing? Yeah, not me. That’s exactly the kind of community I want my kids to know.

The day before Cate’s party I did have a brilliant idea. I realized I could buy the “Frozen” soundtrack as karaoke tracks. As I was Googling how to make that work using my iPhone, I realized there were “Frozen” karaoke songs on YouTube. For free. You’re welcome. And then my husband showed me how to play a YouTube using my iPhone and our Apple TV.

And we had karaoke. They loved it. I’m sure you’re not surprised. I wasn’t really, although they were louder and more in-sync with each other than I thought possible. {Have a listen here.} Multiple moms texted me later to tell me that was their girls’ favorite part. Yes, the free, last-minute addition part was their favorite. Even my Type A-self enjoys this fact.

Who said birthday parties need to be Pinterest-perfect and complicated? Simple works.

And, hey, Cate told me it was her favorite party ever. You know, it could be mine too. That’s what letting go will do for you.

I’m glad God isn’t a I-told-you-so God because he’s been trying to teach me enjoyment comes when I realize I don’t have to be in control of every last detail. Turns out my girl has some good ideas too. Yes, even the glitter, which is currently still showing up in at least four rooms of my house and will long serve as a sparkly reminder that perfection isn’t the goal of a party … or life.

________
Joining Jen Ferguson, who is embracing fun this year, for her Soli Deo Gloria party, where being simply real is encouraged. Also joining Holley Gerth for Coffee for Your Heart and Jennifer Dukes Lee for #TellHisStory.