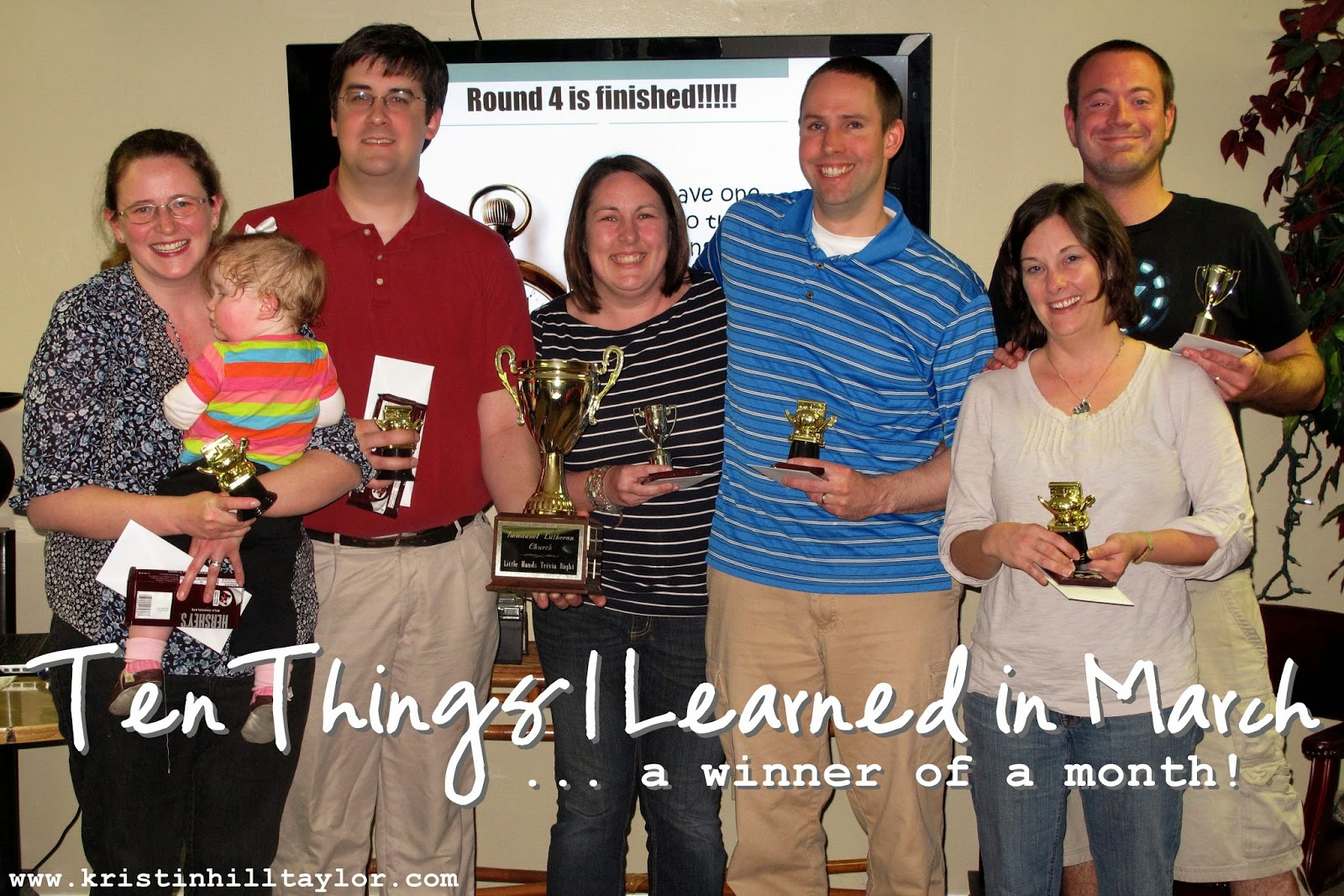 1. Being sick as a mom may mean enduring more than laying on the couch.

I woke up with a stomach bug when we were in Nashville, Tenn., the second weekend of the month. Puking in hotel and mall bathrooms is no fun. I know, the mall. I was only at the mall because that’s where Rainforest Cafe is and my son had been talking about going there for AN ENTIRE YEAR. Seriously, since last time we went. So I couldn’t back out on him … or our table of 18. Really. One table of seven kids 10 to 2 years old and another table of 10 adults and a baby.

No worries, the tables were right next to each other and other adults paid attention to my two kids while I laid my head on the table between gulps of Sprite Zero and water. My brother-in-law told me wanting to drink anything was progress. Maybe he was right because I didn’t throw up any more that day, of course, I didn’t eat anything either.

We then avoided the Lego, Disney, Build-a-Bear and Bass Pro Shop stores so I could return home to my couch, where a sick momma truly belongs. Thank God for my husband and my friend Holly who was visiting from Texas who picked up my parenting slack.

2. An entire week of snow days is welcomed, but then that next Monday morning that comes right after the time change is hard.

On March 10, I had to wake my 4-year-old Ben up for preschool for the first time ever, I think. Of course, that was also the first day in March school had been in session, thanks to two weekends and a snow week.

Oh, and, hey, did I mention that Monday reached 65 degrees and the kids got to play outside after school? Yes. And all the mommas rejoiced.

3. A friend who gives my daughter the gift of words blesses me.

Speaking of Holly visiting from Texas, she brought my girl some books from her childhood. Those were in addition to the ones she mailed the week before she came. And then she taught her how to play Words with Friends. What sweet gifts of encouraging a love of words, which Holly and I share and are happy to pass along to Cate.

4. I really like to read non-fiction, but fiction is a good way to let my mind relax.

I recently finished “Love Idol” by Jennifer Dukes Lee. It’s a book that allowed me to see some truths God has been trying to teach me in recent years in a new way. It’s truly been a life-changing journey and that book has been a valuable resource. I finished the book several days ago and I’m still thinking about it. Meanwhile, I started reading Harlan Coben’s new book, “Missing You.” Nothing like a little suspense to balance all the internal processing.

I also recommend another book I read this month: “Surprised by Motherhood” by Lisa-Jo Baker. It officially releases on April 1. You can read my review here.

5. Dads have good parenting stories too.

In a momma-dominated blogging world, it was refreshing to have dads guest post on my blog earlier this month. In an continuing effort to embrace imperfection, I’ve loved digesting “No More Perfect Kids” by Jill Savage and Dr. Kathy Koch. In conjunction with their book release week, I had some dads come share their own stories of realizing their kids aren’t perfect and never will be. {Oh, yes, consider that another book recommendation for you!}

6. Those postseason college basketball tournaments that aren’t the NCAA Tournament can be fun if my favorite team is playing.

Murray State is in the semi-final round of the CollegeInsider.com Postseason Tournament. Yeah, the CIT. I’ve made fun of all these acronymed tournaments that aren’t the NCAA too. But, hey, my Racers are still playing. And the games have been the kind that make the arena loud. That’s March Madness … at least on some level.

Who knew Netflix original productions would hook me like that? Kevin Spacey is so good as Frank Underwood. I like the behind-the-scenes drama of journalism and politics colliding and I enjoy the suspense of the story unfolding. Speaking of drama, “The Good Wife” has been rocking this season and “Scandal” is nuts in a way that keeps me watching.

Along with our two best other couple friends, we came in first out of 14 teams. The TV Theme Songs category really helped us. We brought home enormous Hershey’s bars, trophies and gift certificates. {See picture at the top of the post!}

9. My kids have never been into a movie like they are Frozen.

The music. The characters. The story. They love it all. Yes, they, my 4-year-old boy is into almost as much as his 6-year-old sister. We had March 18 on the countdown app on my phone and they literally waited by the door for the UPS man to deliver the package from Amazon. He showed up about 4:30 p.m. that afternoon and they started watching it at 4:31 with much rejoicing. They watched it three other times that week and haven’t stopped talking or singing about it.

I don’t usually care about animated movies, but I like “Frozen” as much as any animated movie I’ve ever seen. That’s not hyperbole; that’s the truth. It’s right up there with “The Lion King” for me.

10. When I find songs I like, I listen to them over and over.

My most played songs this month are Ellie Holcomb’s new album “As Sure As the Sun,” NeedtoBreathe’s “The Heart,” and MercyMe’s “You Are I Am.”

Tell me about your March. What have you seen and heard and read and experienced?