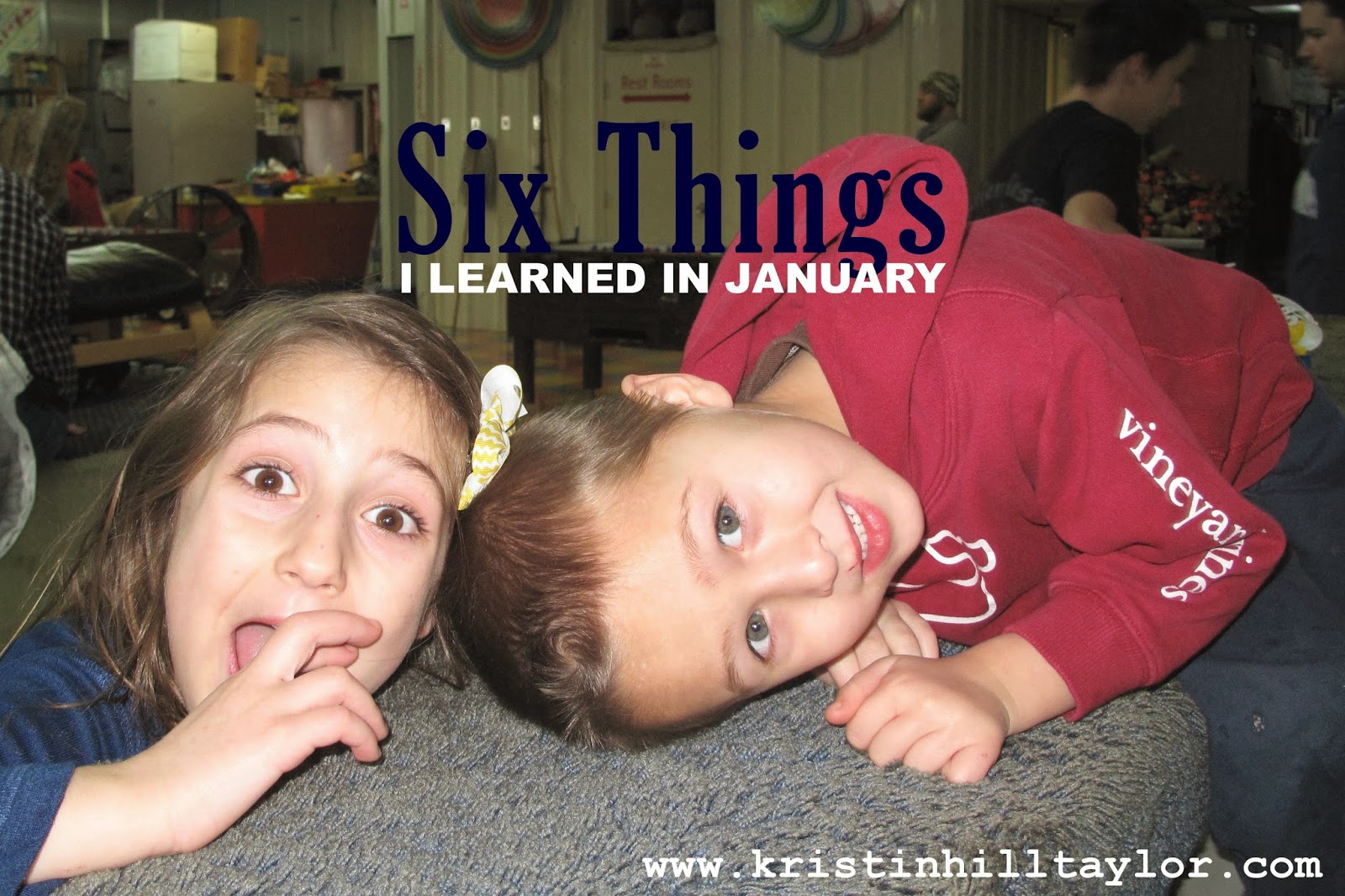 Here we are. First month of the new year done.

I know. I’m sorry. I shouldn’t have said anything.

But it’s true. And, yes, unbelievable. So, before it totally escapes, I’m going to recap these past 31 days with some things I’ve learned {or perhaps realized and remembered}.

1. It doesn’t snow just because the temperatures are in the single digits. OK, so, I didn’t learn this. But, really, if it’s going to be 8 degrees, there might as well be inches of snow on the ground so I can’t leave my house. Instead, here in western Kentucky, we had a bunch of really cold days. {All of this comes from the girl who loves summer.}

2. With the right number of doctor’s appointments, it’s possibly to make a good dent in that new deductible in just the first month of the year. I’ve visited the gynecologist, endocrinologist and orthopedic for various unrelated reasons. My son has been to the allergist and pediatrician. Then there’s an ENT visit for him and another check up for me next week to start February. Plus there are my diabetes prescriptions that have been filled plus Ben’s new EpiPen that accompanies us to twice-weekly allergy shots.

3. Certain kids music can be good even when the kids aren’t still in the car. I’m almost entirely referring to Slugs & Bugs’ “Sing the Bible.” If we hadn’t had the “Frozen” soundtrack on so frequently and the temperatures hadn’t been so cold, I may have left that one on too … at least for a few minutes. “Let it go …” is kind of a theme for me. {I recently wrote about such here and here.}

4. People respond to real life. I posted a couple pictures online showing my real life laundry piles and dirty dishes and discussed dinner. People liked them and talked about their own houses. And at least two people even took their own pictures {here and here}.

5. I like binge watching TV shows more than watching movies. I guess this isn’t something learned as much as it’s something affirmed. We finished watch “Dexter” this month, thanks to Netflix. And this week we started “Covert Affairs,” courtesy Amazon Instant Video. {Speaking of which, do you use Amazon Prime? Y’all. I’m addicted. The free two-day shipping has replaced some of my trips to the store. And now I found a show to watch for no extra charge beyond the $79/annual subscription fee.}

6. I do much reminiscing in January, a month that holds some landmark moments for me. I became a Christian in 1996. Greg proposed in 2002. I was diagnosed with diabetes in 2004. We met Cate’s birth mom for the first time in 2007. Ben’s adoption was finalized in 2010. This month hasn’t had life-changing moments like those, but it’s been busy and full of real life with a house, a husband, two kids, a vacation rental house, a job managing another vacation home, school commitments, friends who are like family, and family who are friends too.

________
Author Emily Freeman got me started documenting life this way. {See previous posts from 2013: June. July. August. September. October. November.} Emily’s January post is worth your time as is sponsoring a child through Compassion International, as her post suggests.