I introduced you to Cate’s story earlier this week, but here is more about how I became a momma.

I owe my sister, really. God used her in a way that surprised me and changed my life in the best possible way. But first, I better tell you how we ended up on the path to adoption.

“In the midst of confusing darkness, we must remind ourselves that we never know where and how God is at work, weaving together people and events. In time, he will show us the underside of his incredible tapestry.”

{Cindy Lewis Drake in “Infertility:
A Survival Guide for Couples
and Those Who Love Them”}

I decided I was ready to have a baby. Like most all changes in our marriage, Greg was ready first and patiently waited for God to nudge me forward. We’d been married two years and four months. I assumed when I stopped taking birth control I’d be in control of this baby-making process. Six months in, I realized that wasn’t true. Irregular female cycles led me to the gynecologist’s office and began a nearly two-year journey.

An exploratory surgery that led to my endometriosis diagnosis was sandwiched between two multi-month spans of me taking Clomid, an ovulating-inducing medicine that made me cry hysterically and blow nearly every situation out of proportion. My messed-up hormones put a strain on my moods, my perspective and my marriage. And there were oh-so many vials of blood that always brought hope of explanation and a new plan.

While I was ovulating normally, I still wasn’t getting pregnant. We ended up seeing a reproductive endocrinologist about two hours away from our small town. We weren’t new to the infertility jargon, but this doctor explained things to me that made me realize how conceiving a child is a miracle. So many factors completely out of our control have to be in sync.

All of this spanned one year and nine months. I had decided I was ready to have a baby. But I didn’t have a baby yet. And I was exhausted.

In the days leading up to a follow-up appointment with the reproductive endocrinologist, we decided to draw some emotional, physical and financial boundaries, which, really, all came down to this: If the doctor suggested in vitro fertilization, we’d turn our attention, emotions and money to adoption.

In what was our second appointment with this specialty doctor, he ended up telling us IVF was our best bet to conceive a child. On the drive home, I experienced the peace that passes all understanding that Paul talks about to in Philippians 4 as clearly as I ever had in my life. 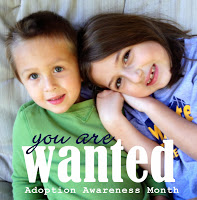 Truth was, we had absolutely no idea what pursing adoption meant. We tackled it one conversation, phone call, and prayer at a time. I was tired of recounting the timeline of infertility and putting on a strong face with the professionals, so we decided not to apply to an adoption agency. We decided to just wait. Gradually, we told people about our desire to adopt.

Then two months later, on Christmas Eve 2006, we were at my parents’ house and my sister and her now-husband told us about an 18-year-old girl they knew who wanted to find a family to adopt her baby. Not quite a month later, we saw our daughter via ultrasound and named her Catherine Anna on the way back to Murray, Kentucky, from Bloomington, Indiana. Turns out, as I later learned, the birth mom’s middle name is Catherine.

And, you know, that peace I experienced when I gave up trying to get pregnant stayed with me throughout the process. No, I wasn’t nervous. We completed our home study, hired an Indiana attorney and social worker, hired a Kentucky attorney, decorated a nursery, made six more trips to Bloomington with that last coming in the early morning of Sunday, May 6, 2007.

Our daughter was born seven months after we stopped trying to create a family. Her birthmom told us we were an answer to her prayers. Yet this little life another woman carried and cared for was an answer to the prayer my heart had cried out for years. I had begged God to become pregnant. And while God didn’t answer this exact prayer, he heard the desire of my heart, which was to have a family. It’s a lesson I still hold close: Even when we don’t say the right words, God knows. In his timing, we see at least a glimpse of his masterpiece.

________
This is the third in a series of adoption posts this month. You can find them all here, as they are published throughout the month. Up next is Ben’s adoption story, in which God continued to reveal his faithfulness as our family grew.

I’m linking this post with Jennifer Dukes Lee and other storytellers because Cate’s story is really our family’s story and that is a huge part of God’s story.