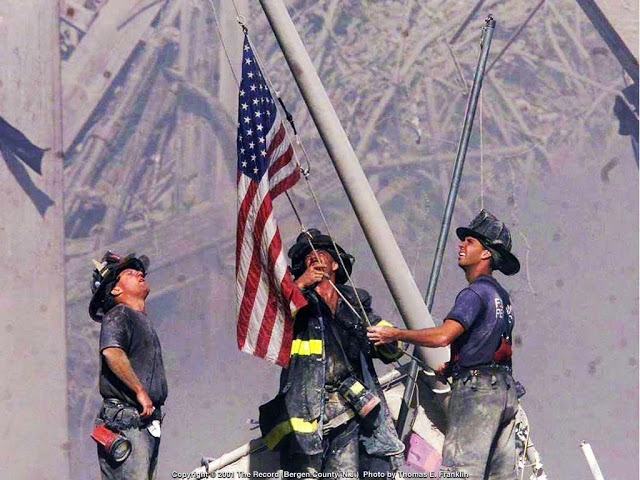 I remember a dozen years ago walking into The Associated Press newsroom room in which I worked and not being able to take my eyes off the three TVs showing three different network news programs delivering one message I never thought possible: Our country was under attack. The first intentional plane crash came while I was driving to work and the second as I walked in the office building.

I remember scrolling through the D.C., New York and general new wires on my computer. I read sad story after sad story followed by the stories of bravery before talking to some people in Louisville about how these terrorist attacks of Sept. 11, 2001 affected their lives. Four months out of college, that one day seemed like some unnecessary greeting to the real world, where news truly changed us.

“I went to mass at the Cathedral of the Assumption as one of my contributions to our local stories yesterday. I had never been in there. It was magnificent. That seems like such a silly word, but it was truly glorious. I understand why God gets excited to make His presence known in man-made buildings like that. The priest’s words were few, but powerful. It’s good to know there are leaders like that in every community reaching out to people, opening buildings to be a refuge from evil.”

That one day made us think. It made us watch and see differently. The one day was unlike any other and shaped plenty of the rest.

I remember Greg sending me an email while working in the law school library in Lexington about how this all was unbelievable. I savored the communication from this one.

I remember listening to Alan Jackson’s “Where Were You” like there wasn’t another song available. I couldn’t get enough. Somehow this song summed it up for me.

I remember knowing our country would never be the same, in both heroic ways and frightening ways. Sept. 11 is a date that carries so much meaning. I know people who have since had babies born on that day. So much life was taken that day 12 years ago, but so much life has come since.

I’m not the same because of that one day. We are not the same. Perhaps we’re even stronger and braver.

When those planes destroyed our sense of security, I barely had thoughts of getting married, much less raising kids. I knew I was living far away from where the news actually happened but close enough to feel like I experienced it first hand. Yet I have no idea what the best words are for my 6-year-old girl and 3-year-old boy as they grow up in a world that has managed to recover from Sept. 11, 2001, but in a world that will never forget {and should never forget} that one day.

But God reminds me our lives are about more than that one day or anything other one day. It’s a journey we’re on and a process we’re in. Yes, that one day is important. And there are other important one days.

Yes, I’ll probably tell my kids more about where I was when those terrorists flew planes into the World Trade Center, the Pentagon and a field in Pennsylvania. I’ll teach them to be cautious but brave and free. I’ll tell this about that one day and many other days that make up our history.

But I’ll also tell them that we have a future and a hope because on another one day Jesus died with all our sins on a cross. And on another one day that is still to come, he’s coming back because he’s prepared a place for us that doesn’t have terrorist and attacks and fears. And that one day is the one for which we’re remember and living.