Greg has surprised me in big ways three times in the 15 years I’ve known him. I’m not easy to surprise, mostly because I ask tons of questions. He surprised me the day he asked me to marry him. Then again 8 years he managed to have my family and closest friends keep my 30th birthday party a surprise. It was even a week late, which gave him the Mother’s Day hook. Well played, husband.

The most recent surprise came this spring. Greg and I were taking advantage of both our kids being in school and spent an early lunch hour at a local restaurant that sells the best gyros. Not long into the conversation, Greg reveals he’s been thinking about taking me on a trip. This isn’t the biggest shock because we’re often planning our next road trip adventure. But he said he wanted to take just me to a beach.

You should know, beaches aren’t typically his first-choice vacation spots. But he knows they are mine. We spent the rest of lunch discussing where we thought we should go. We threw out all kinds of tropical spots. Truly, I didn’t care where we decided to go.

Greg and I are notorious for giving each other gifts early. We’re terrible at gift surprises. We also are quick to plan a trip and say it’s our anniversary present to each other. One year we bought one of those bike trailers for our kids to ride in, you know, for our anniversary. Hey, riding bikes seems like a good thing to do together.

Oh, so you want to know where we’re going? 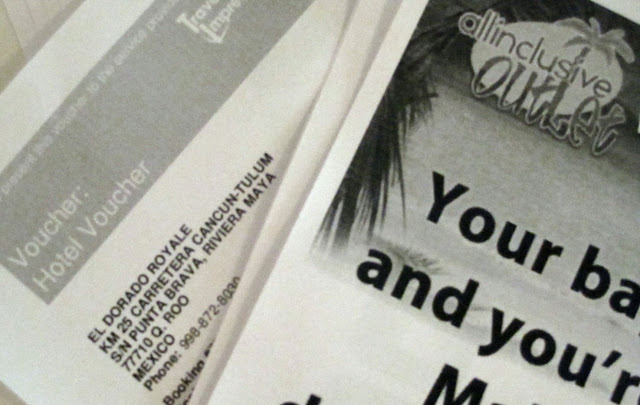 Do you see that? My husband is taking me to Mexico. In one month and 16 days. You know, for our 11th anniversary, which we’re celebrating today.

I say Greg has surprised me three times. That’s true if you’re talking about total, out-of-the-blue surprises, but I’ve actually lost count. We’ve known each other for 15 years and almost six months. We’ve been married 11. We’ve readjusted our plan when God led us down new paths for work more than once, how to have babies, and thousands of tiny decisions that make up our life together. We’ve gotten off on the wrong exits or taken detours that became adventures. We’ve laughed when maybe we should have cried and certainly cried when we should have laughed. We’ve watched games and played games and read stories and told stories and created stories.

Our life isn’t anything like I planned, so, really, maybe that’s the biggest — and greatest — surprise of this thing called marriage.

Husband, I’d say yes all over again. I’d go through the hard years again to get here. Thanks for surprising me in the few big ways and thousand of tiny ways. Our life is better than the one I had planned for myself. Here’s to another four decades together!

{8.8.13} I linked this post up with Kristen Strong’s Out of the Blue, where we documents the stories that surprise us. Clearly this one fits!