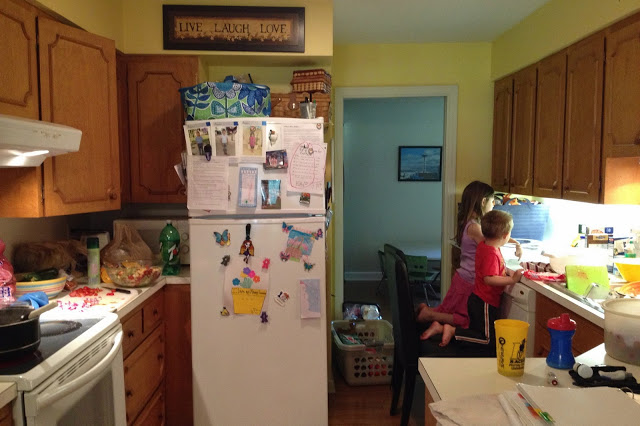 A couple days before Memorial Day weekend started, I posted this picture above on Facebook with a caption that said, “I’ve had help this morning preparing and cooking food for this weekend at the lake!”

And that’s absolutely true. But, of course, there is more to the story.

I had a list of food I wanted to prepare before my family joined my parents and siblings and their families at our lake house for the holiday weekend: kabobs, pasta salad, hashbrown casserole, strawberry shortcake, mac and cheese, and honey lime chicken.

In the picture, the kids are working on the hashbrown casserole after I had measured and portioned what they needed to mix together. I was working on the pasta salad to the left of the picture. You can see the tomatoes and onions on the cutting board, the big bowl I was tossing everything into, and the pot of noodles on the stove. You can also see some drinks, my cookbook binder, insulin and blood sugar test kit on the counter along with baskets of food in the background.

Yes, my kitchen was a mess, but, honestly, it was a fun morning of prepping food. That was my thought when I decided the moment was worth documenting. You have to remember, I’m not always the mom who likes help that makes more messes than I would alone, but I’m trying to embrace real life and live in the moment with my kids. And I really was appreciating what we had going that morning.

Then Ben asked if he could eat some cheese. I told him the cheese I had there for him was to go in the hashbrown casserole and I could get him a snack after they got that mixed up. Yes, I’m a kind of a work-before-play girl, but I also have been known to get side-tracked in the kitchen and just wanted to finish what we had started so we didn’t leave out an ingredient. I turned around to stir the noodles and tortellini for the pasta salad just long enough for him to get a handful of shredded cheddar. I noticed the evidence around his mouth and told him not to eat anymore.

And I’m pretty sure my girl stole some too. She just leaves less evidence than her brother.

I only had enough shredded cheddar for the recipe and had planned to give them slices of American cheese as soon as I got the hashbrown casserole in the baking dish, ready to bake at the lake. But they couldn’t obey my one instruction about the cheese, so I sent them to their separate rooms for being sneaky and disobeying my specific request.

Yes, it’s minor, and it’s not that big of a deal, but we’ve been working on obedience and common sense around here. And, seriously, who wants less-than-called-for cheese in hashbrown casserole?!

So, yes, I had help preparing our food. But I also had to send my help away just moments after this picture was taken. Of course, then I cleaned my kitchen too.

Today I’m participating in the inaugural “Behind the Scenes” link up at Crystal Stine’s blog. I love the encouragement to share the real life happening beyond what a photo captures. Yet another way for this momma to embrace imperfection.