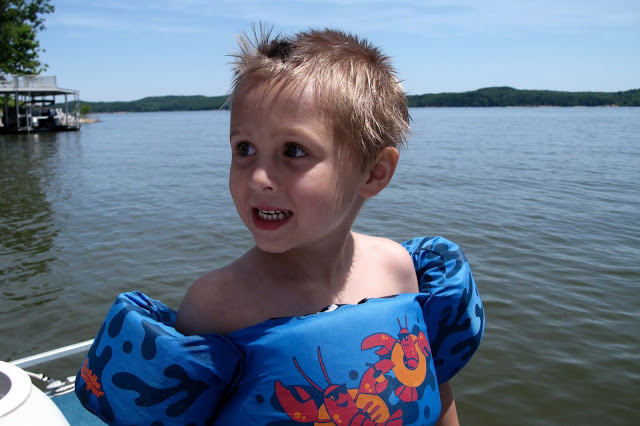 He’s cute and funny. And he has great cowlicks in his hair he’ll probably hate when he’s a teenager. He adores and annoys his sister in the same moment. He can run into a wall and not shed a tear, but he’s emotional and tenderhearted.

He jumps and climbs and swings and runs and crawls and growls and yells and sings and talks. And he thinks he wears a cape. He’s on full speed from the time he wakes up, usually before everyone else in the house, until he naps, which he often has to be convinced is a good idea, and then again until his bedtime.

I’ve written before about how being a boy mom is hard for me. I don’t always get his way of thinking. I shush him and then feel bad about quieting his imagination. I tell him to stop and not to do whatever it is he thinks is a good idea instead of showing him what he could be doing with his energy and ideas. I yell when I should whisper truth.

But, really, I’m not sure I know how to do be a boy mom. I do think I’m getting better. But the boy energy is like a foreign language to me. I have a brother who is 35 months younger than me. We get along so much better now that we’re grown ups. But having lived with a brother in the next bedroom who often pounded at my bedroom door didn’t prepare me for this.

I believe without a shadow of a doubt that Ben is meant for our family. God orchestrated our family. This little boy who stole my heart and challenged my mind from day one has taught me life is usually not what we expect. He has spurred me toward God, who created this boy and this momma and chose to give us each other.

But some days I’m so unsure of myself as a boy mom. This morning I had a bloody nose before I got out of bed because Ben, who had been sweetly snuggling with me, decided to throw his head back into my face. Ouch.

Then not long after, I sent my 3 1/2-year-old boy into the bathroom to exchange his wet Pull-Up from overnight for a pair of Toy Story underwear I’d just dug out of the dirty laundry. Hey, they were dry. Somehow in the changing of pants, he dropped the undies in the toilet … and flushed them down! Really. I have no idea. First thing I did was dig through the dirty laundry again for another worn but dry pair of undies. Then I texted my husband, who called the plumber, who advised us to flush a few extra times and call him if the toilet bubbles.

Later in the morning, when we were at Big Lots conquering my random shopping list, I purchased 12 new pairs of Cars and Toy Story undies for my boy, who peed in the already worn but once dry underwear the moment I buckled him in the car seat to head home from Big Lots. At least the next pair he put on were clean.

And they stayed that way until we traded them in for a naptime Pull-Up. And a I breathed a sigh of relief because I’d made it through lunch time, down at least 0-4 as a boy mom but with an entire afternoon and evening before me.

When the world around you mocks the seemingly small life in which you lead,
You are training future leaders, raising a generation, showing them what they need.
For the Lord grants us power and wisdom, if only we ask,
So, I challenge you, fellow mother, take off your mask.
Show the world that what you do is divine,
That our strength comes from above, that true power we can find.
Our cape may be a faded sweatshirt,
Our weaponry a shrill, ear piercing call.
Mothers, when everything around you is about to fall,
Remember: even superheroes start out small.

{From “Even Superheroes Start Out Small” by Christie Elkins}

Boys know about superheroes even if nobody has introduced them directly to Superman or Spiderman. Boys know they want to fight and defend and save the day. But they begin little and it’s no easy task training up this boy in the way he should go.

But Christie is right. Us mommas — dare I say especially us boy moms — are heroes too. We have a big job to do. And the big job is never really done. It’s day after day, moment after moment, bloody nose after bloody nose. We start out small too, but God promises he’ll finish the good work he has begun in us.

Thankfully, we serve a mighty God who knit us together before we born. He placed us here. He gave us each other. And even on the mornings I’m completely behind in the score, the creator of the universe has given me this boy with cowlicks in his hair and zest in his steps to love and to train. And we are in this together with the One who considers us his beloved.

I’m linking up with Jennifer Dukes Lee and other storytellers as part of the weekly #TellHisStory. This is my story right now and it’s forever God’s story.

And then on Thursday I decided to link up with Hope For the Weary Mom, where each week Dear Weary Mom posts encourage. What’s more weary than flushed underwear and bloody noses?