My house was a mess. And I took pictures. 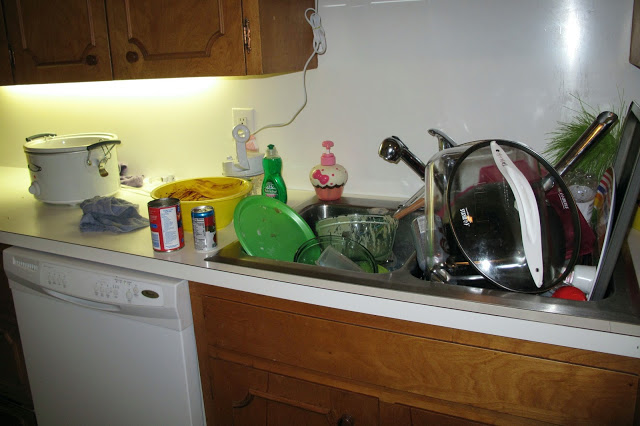 The dishes on the right are clean, awaiting their return to their homes. The ones in the sink are obviously dirty. The dishwasher needed unloading and reloaded. Yes, that’s grass growing toward the back. People, chill. It’s a preschool project that’s doing well. 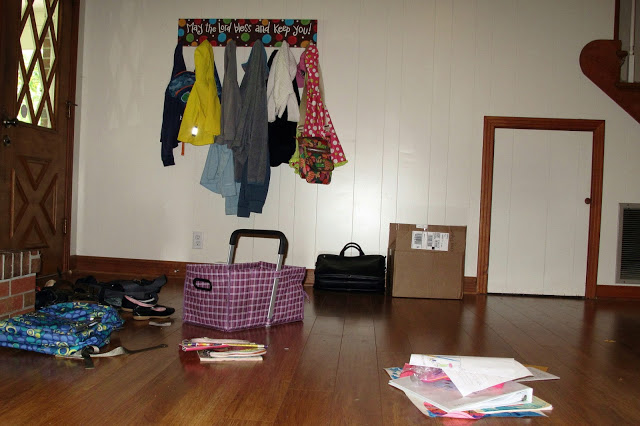 Piles filled the counters and even some spots of the floor. School supplies and backpack contents spilled near the shoes gathered by the door. Please notice to the right the crushed Spiderman Cheez-It crackers. Those crumbs were there at least two days. 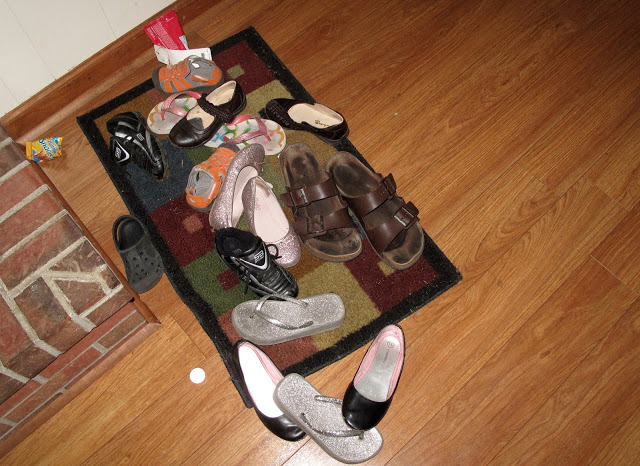 Let’s take a closer look at those shoes by the door. Six pairs belong to my 6-year-old girl, who obviously likes sparkles; two belong to my 3-year-old boy who has a momma who clearly prefers shoes that don’t tie; and one pair belongs to my husband, who would never walk out in the garage barefoot like I would. And, yes, that’s some snack trash from my girl’s backpack mixed in. 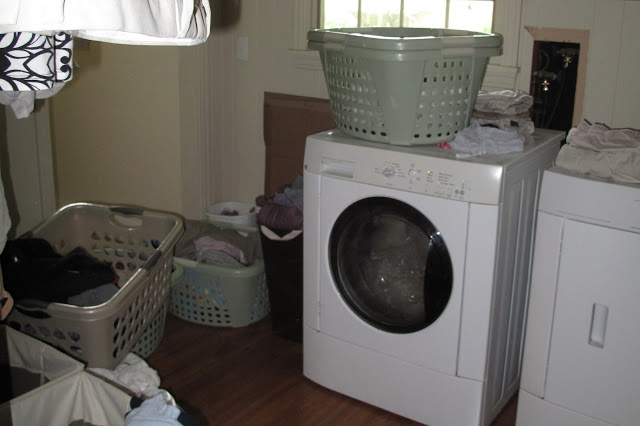 Six loads of laundry waiting to be folded. Another load in the washer waiting to be move to the dryer, which was finishing up its load. I told my girl on Saturday that her new chore is matching socks. She panicked a little. “Do I have to do it every day?”

No, dear. Clearly I don’t deal with laundry every day.

Saturday was a good just-the-four-of-us day. We’re all social extroverts, so there is much inviting friends over for dinner {which, actually, I did for Saturday, but the other family couldn’t come} and meeting friends at the park and playing games with friends and making an assortment of other plans with friends. But Saturday it was just us. And it was good.

We spent a couple hours going to yard sales, where we scored my boy a bike; drove some things out to our lake house; had lunch at Penn Station; worked outside; watched “Scandal” while Ben napped and Cate played in her room; played outside; cleaned some; ate pizza on the front porch; got the kids to bed early and us adults watched the rest of “Scandal.”

Yes, the rest. Like we’ve watched all 29 existing episodes {seven in season one on Netflix and 22 in season two on Amazon/Hulu} in a couple weeks.

And, yes, notice the lack of cleaning listed in my inventory of our day. A little. Before I tackled the house, I cleaned out the van instead. Priorities, people. I bagged trash, vacuumed crumbs and wipes smudges while my husband used a machete to whack some weeds down near our fence. It’s when we came in from doing those chores that we sat on the couch under the ceiling fan and watched “Scandal” for the first of what would be two times that day. We are were addicted and had to know what happened next with Olivia Pope, Fitz Grant and their friends, er, enemies.

The house got clean over the course of Saturday and some of Sunday. Of course, a boy who spilled his milk and got into his sister’s nail polish, a girl who chose yet another pair of shoes, and a husband who reminded me Sunday was supposed to be a day of rest were involved. Only a little grumpiness from me was involved. The rest of the time, I enjoyed my family this weekend in and around this sometimes-messy house.