I’m thankful to be out of town this weekend visiting one of my dearest friends and watching thoroughbreds race at Keeneland, one of the most beautiful places and events Kentucky has to offer. But I thought I’d celebrate the weekend with by sharing some of my crazy, real week.

Quite some time ago, I decided I didn’t want to complain on Facebook. I didn’t want my status updates to continually express that it was a hard day. Now, I often ask for advice because motherhood is the hardest job I’ve ever had. And I’ve recently let it be known I’m boycotting Walmart because of unhelpful, bad attitudes in the oil change department … two days in a row!

But, thing is, life isn’t perfect. Yes, Facebook captures more highlights than complaints, but, honestly, I’m happier and more content when I don’t complain. And, you know, when you choose between two pictures, you’re gonna go with the one that’s more flattering. That doesn’t mean my life or the people in it are perfect.

So I thought I’d share some stories from this week with you, just like I did in text messages to a few of my closest friends. Us mommas need to vent and share and laugh because motherhood is an adventure.

The doors were locked. The house was quiet.

Turns out he was in the living room. In the corner of the couch. With a blanket over him. Silent as a mouse. Greg moved the blanket and Ben grinned and told us he was playing Hide-and-Seek.

Here’s what you need to know: Ben used to be the worse Hide-and-Seek player. Ever. He’d tell you where he was. He’d make so much noise moving around that you’d have to look other places knowing he wasn’t actually there just to make him think you were playing along.

Well, he’s become the champion Hide-and-Seek player. So much so, we lost him. Then we found him. And sent him back to bed. 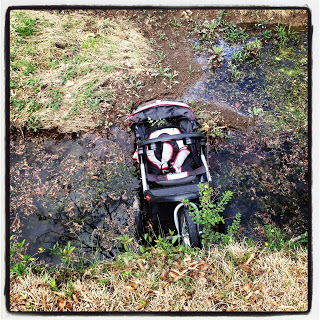 I thought our stroller was stolen.
But, really, my son just decided it needed to go on a stroll. He pushed it into the drainage creek in our front yard.

Thankfully, there wasn’t much water in it Wednesday — the day before it rained for many, many hours. My friend Courtney helped me rescue it. I sprayed it off and then laid it out to dry.

Before it could get dry, the rain drenched it again, but that one isn’t Ben’s fault.

I spilled milk …
… between the stove and the counter.

You know, that little sliver of space where crumbs go to rot? Yep. There. So Greg helped me move the stove out from the wall so I could clean up the spilled milk. I didn’t cry. But I didn’t want to let that leave an unwanted smell in our kitchen. While I was back there, I wiped off and swept up so many other unintentional leftovers from meals long, long ago. 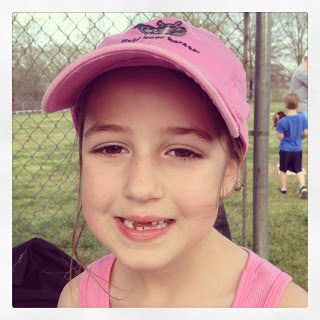 A baseball loosened Cate’s tooth.
She’s been losing teeth, like kindergartners do. The remaining front tooth was loose, but at Cate’s first t-ball practice Wednesday evening, a baseball bounced up and hit her mouth, loosening the tooth anymore. Oh, and it bled some too. She wiggled it, thinking she’d just pull it out there. I convinced her to just go play, reminding her it would come out when it was ready.

About 12 minutes later, she walked over and smiled a more-toothless grin. And Coach Daddy handed me the tooth. That was No. 5. And it’s not the first one she’s lost while playing a sport. Although the first wasn’t a direct result of the sport.

Ben peed all over a restaurant floor.
We walked into Culver’s after Cate’s t-ball practice. She was still saying words that sounded funny because her tongue doesn’t have any front teeth to press up against. I figured out what everyone wanted to eat and started ordering when I heard Ben say, “I have to pee,” and grab his crotch. I mumbled, “Just a minute.”

And then he peed. A lot of pee. In a pool around his feet. On a restaurant floor.

Greg swept him up and carried him the bathroom, creating a trail of pee across the floor. The restaurant floor. I finished ordering, got Cate settled at a table, and then realized I couldn’t really help get dry clothes from the minivan because Greg had the key.

Knocking on the door didn’t really cross my mind, but calling and texting did. Unfortunately, I had his phone in my purse because t-ball coaches don’t need extraneous things like phones in their pockets. 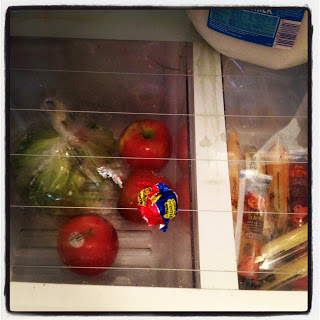 And just one last note: If you or one of your friends is going sneak a mini Cadbury Creme Egg {the last one!}, you should discard the evidence. And, honestly, I have no idea which kid in my life I’m talking to. Both my own and a friend were in the kitchen unsupervised at different times Wednesday.

Yes, Wednesday, the same day I spilled milk, thought my stroller was stolen, held my daughter’s fifth tooth in my hand at t-ball practice, and apologized to the distraught cashier because my son peed all over the floor.

I laughed this week more than I yelled. Yes, I found relief when I could sit down after my kids were in bed each night. I took some deep breaths, talked to my husband, rested, and woke back up the next morning to do it all over again.

Some days are messy, like that milk beside my stove or the pee on the restaurant floor. Other days are adventures, like the stroller’s ride in the ditch. Some days are a combination of both. We haven’t even talked about my son’s poison ivy in his ear and on his boy part or the oral steroid that cleared him up but put him a little on edge. And I wrote all of this before I waited for 3 1/2 hours to see my doctor only to have her tell me I actually needed to go back to the doctor in Louisville. Really. Seriously. Meanwhile, while I sat in an exam room for hours, there was an enormous miscommunication about carpool from school so I had to track down my daughter via text messages with my husband, who made a phone call.

My husband and best friends get my venting moments so all of Facebook doesn’t have to hear. My life is real. I have lots and lots of good days and plenty of hard ones. It’s a hard lesson for me to learn, but laughing over the mishaps in life really is better than crying over spilled milk.

What story {or stories, perhaps!} do you have to share about your week?