In the spirit of noticing and enjoying my kids growing up lately, I thought I’d share some of our favorite games these days. Greg and I both come from game-playing families and still love to have game nights with our friends, so I’m glad we’re raising a game-playing family of our own. 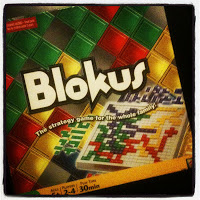 Blokus
We got this game I’d never heard of as a Christmas present from a friend of ours. I was immediately intrigued because the pieces reminded me of Tetris. Ben can’t quite play (which is expected in a game recommended for people 5 and older), but he does say, “Momma, I’m going to jam you up!” when he’s helping his daddy play. Cate, who is 5, is developing some strategy, but this is one of those games that is simple to learn but leaves plenty of time to master. Sometimes when the kids are in bed, Greg and I will play some competitive rounds of Blokus without our kids.

Sequence for Kids
Another gift from another friend, I hadn’t seen this game until it was sitting on our table. I’ve seen and I believe even played the regular version, but this is a fun kid version that my 3-year-old restless boy can play and my game-loving, 5-year-old daughter likes to play. It’s like a more sophisticated Connect Four. I get the feeling there will be more post-dinner games of Sequence for Kids happening around here. 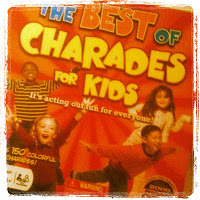 The Best of Charades for Kids
I don’t generally like charades. Mostly, I don’t like standing in front {even a small} crowd and acting. But my daughter loves this game. She got The Best of Charades for Kids in a board game exchange at her class Christmas party {Fabulous idea, huh?}. I do like that each card has three words of different difficulty levels with the easiest having a picture as well as the written word. That makes playing this an option for Ben, who was surprisingly good at translating the picture into her actions.

Rummikub for Kids
This the junior version of a game both Greg and I played as kids. He calls is RUM-ME-CUB and I call it RUM-ME-CUBE, just as the directions shows. To make matters worse, his mom calls is it RUMMY-CUB too. They are little tiles, people. Tiles are more like cubes than cubs. Whatever you call it, the kid version of Rummikub is worth playing. 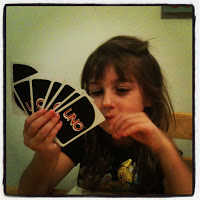 Uno
Greg and I love to play cards so, really, we’re hoping to raise some Euchre and Spades players. But until then, we’ll play Uno with our girl who definitely gets the damage a well-timed “reverse” or “skip” can do. SKIP BO is the next card game I want to teach her.

Chutes & Ladders
Admittedly, Chutes and Ladders and Candy Land rank pretty low now that we’ve reached a point of being able to play all these other games, but I do find much joy in my son thinking sliding down chutes, which move him farther from the finish line, is fun.

What kind of games does your family play?

________
Disclosure: Compensated affiliate links used, but the opinions about these board games are mine. Want more? Subscribe to get “Insights” in your inbox. Or follow me on Twitter.