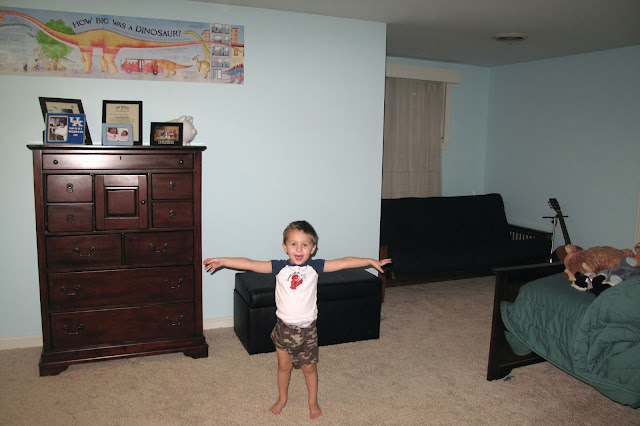 Taaa-daaa! This is Ben introducing you to his new room. He’s been sleeping up there a couple weeks now, but momma was behind on taking pictures. Pardon whatever is going on with his sorts. That what my 3-year-old boy looks like after dressing himself. Hey, he did it himself.

So, anyway, mostly I was just ready to move him. He was outgrowing his nursery room, which is the smallest bedroom in our house. Plus, that room was right next to the main bathroom, so some mornings he woke up earlier than he would have if he hadn’t heard Daddy getting ready for work. 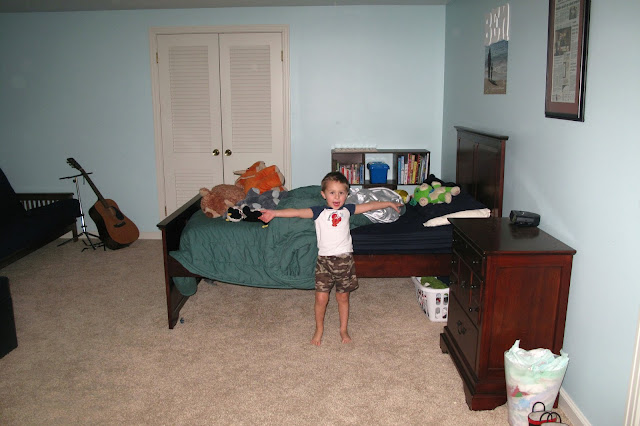 You can see. This bedroom has lots of space. There is also a little more room behind where I was standing to take this {above} picture where he has his tool workshop set up. I moved a few of my favorite pieces of wall decor from his nursery. What you see here: The Courier-Journal from the day he was born and the other is a Paper Coterie poster with a photo of him and I standing on Sand Beach in Acadia National Park. I also have a Paper Coterie growth chart I love that is hanging where you can’t see it in these photos. Both the poster and growth chart are adhesive and just stick on the wall and both moved well from one wall to another wall. I totally recommend these products.

Other things about his room move: We didn’t have to paint because I picked this paint color for the guest room that was being converted into Cate’s bedroom at our old house based on a butterfly comforter I wanted to use. When we decided to move before anyone even got to use the freshly painted guest room at our old house, I just picked the same color in the new-to-us house because I was moving the comforter on over too. {Don’t judge. I also had our bedroom painted the same color and the nursery painted the same color. If you mind something you like, go with it, at least that’s my philosophy!}

The furniture was bought used from someone when we moved the full bed and dresser we had out to our lake house. We knew the plan was eventually to move Ben, so we bought this furniture with that in mind. I’m glad there are lots of drawers because that closet you see, well, it’s not really his. It’s the biggest closet in the house, so that’s where I store things like gift wrapping, car seats we don’t use right now, suitcases, boxes of newspaper articles with my byline, and other things that don’t have a better home in our house.

The futon is for guests who do come. So, really, friends, come visit us. Even though we made the guest room into his room, we still want somewhere for guests to sleep. So Ben can move for the night to one of the bunk’s in his sister’s room and guests can use his room. We’d like to adopt a third baby who would use the nursery, but it could eventually also become a guest room.

Now, if I could just get him to care about using the potty …